Anyone who has spent time in a swamp, like the incredible Florida Everglades, knows what “biogas” is. It’s the end result of natural processes that break down plant matter and return the nutrients back to the soil – and produce a lot of methane gas. Capturing that process, improving it, and making use of the methane is a very old technology that has been in use in some form for centuries.

It also might very well be the future of energy around the world, especially with a few advancements and refinements. 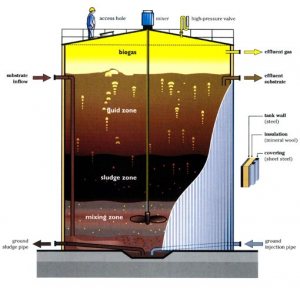 The process of making biogas is known as “anaerobic digestion” because it digests any kind of cellulose or sugar based plant matter without air. The work is done by bacteria that get the energy they need to survive in the process. All that has to be done is to set up conditions that are ideal for them to thrive in a big tank and they are happy making methane. The end result is that nearly all the carbon present is consumed, between 60-70% of it released as methane (CH4) and the rest as carbon dioxide (CO2).

Any source of “cellulosic” or woody material can be used – hay, paper, food, corn stalks, or what have you. The bacteria are not fussy.

For a while, ethanol has been the renewable energy standard here in the US. Growing fuel is an attractive alternative to emitting more “greenhouse gases” from carbon sources that have been dormant underground. But biogas is much better than ethanol for the following reasons:

The advantages over ethanol are impressive. That’s why this process is being developed by many companies around the world and at every university Agricultural / Bioengineering department in the US. On a personal note, I was part of a project to make biogas as a cooking fuel on a small scale for Haiti when I was in High School, and my grandfather had a small biogas system operating when he ran the Delaware County, Pennsylvania, sewage treatment plant 60 years ago.

If this technology is so well known and so great, why isn’t it more widely implemented?

Biogas is a very low quality methane produced at very low pressure. Methane, as a very small molecule, does not form a transportable liquid easily or safely. All of the reasons why natural gas is often flared off are amplified by the impure nature of biogas.

Most of the programs making biogas use it to create electricity, which of course can be transmitted anywhere. But the efficiency of small-scale electrical production is low.

That’s why the ability to take methane, one carbon all by itself, and combine it into a larger chain in a cheap, simple process is so valuable. Eight carbons strung together, as octane, is gasoline – concentrated chemical energy in an easily transported liquid form. But even smaller molecules like propane (3 carbons) or butane (4 carbons) would be a major improvement. The new technologies described earlier for making longer carbon chains from methane could revolutionize biogas into systems something like this one: 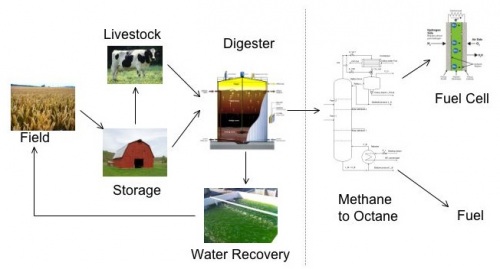 Note that there are still issues of scale – this whole plant may not make sense on a small farm, but might need to be part of a co-op that serves a whole community. But the potential for these two technologies working together to provide a sustainable, carbon-neutral fuel that is economical and supports farms is undeniable.

How might this work? Each digester could make up to 88 gallons of gasoline per ton of solid input. It could use anything, including native plants that grow like (or as) weeds as part of a “fallow” season for a plot of land. In a nation that consumes about 140 billion gallons of gasoline each year, that implies about 1.5 billion tons of plant or wood waste is needed – which happens to be about what we have around even before we deliberately grow crops just for fuel.

Note that hay is worth around $100 per ton, but the fuel that could be made from it in this process would be worth about $300. There is a lot of room for the cost of the process.

The liquid fuels that could be produced by combining these technologies would have nearly limitless uses through the economy. Transportation is one thing, but it’s worth noting that in Minnesota that is about 1/3 of our energy usage – the other needs being heat (also 1/3) and electricity.

While it is possible that a system like this would enable us to grow our transportation fuel, even perhaps export some, it is always beneficial to conserve as much as we can so that it is available for other uses. And that’s what we’ll talk about next time.