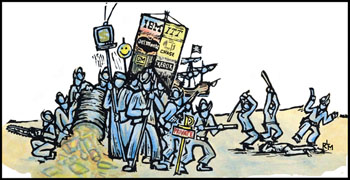 Another calendar year is coming to a close, the dozenth of the twenty-first century. There are young people reaching adulthood for whom it just makes sense that when you write the year, it starts with the number two. For their elders it has taken some getting used to. Sometimes a way of doing things seems normal because that’s the way it’s always been. Then it changes. The coming years will bring many changes to get used to… deeper than how we write the date.

For one thing – and this may seem a bit bold to suggest – the emerging generation will be the last one of the colonial era; the world order that was brought into being when three wooden sailing ships, under the flag of the newly emerging Spanish nation, approached the eastern edge of the Caribbean basin. A series of long-cycle historical processes were set in motion then that are reaching the end of their arc, their energy depleted, their logic unsustainable.

Propelling the new order was the dynamic of boom and bust cycle that came to define the capitalist relationship to nature. Beginning with minerals and animals – gold and beavers – each newly identified resource was to be seized, consumed and transformed into personal wealth and power at the greatest possible speed until exhausted. Any barriers  –  be they Native villagers, Indigenous regulation of coca and tobacco or the natural flood cycles of rivers – were to be swept away, absorbed or conquered. The wealth locked within would be released for investment in the next, larger, boom cycle, the waste produced in the process, left behind.

The conquest of the vast Incan empire, with its complex regional governing structures allowed the revival of forms of forced servitude that had been on the decline in Europe. The labor of peasants, which had been mobilized under the Incas to build roads and hydraulic agricultural systems to feed the population, was redirected into mining and cash crops for export to Europe; the university at Cuzco destroyed; the land appropriated. (The river of Andean wealth would rest only momentarily in Spain before passing into the hands of Dutch and German bankers to service the crown’s military spending.)

This pattern would be repeated, with variations, from Congo to Viet Nam, from Australia to India. So began the current era.

The destructive dynamism of the new order generated opportunities.  When the grain mills of Minneapolis became the matrix for an epidemic of worker injuries, it led to the manufacture of prosthetic limbs, not the improvement of working conditions. The rule was to generate profit, not limit it. That was the birth of Minnesota’s medical technology industry. The market would know no limits; the economy would forever expand,; and nature would never complain at the abuse.

All cycles come to an end. The thousand boom-busts turned out to be but moments within a huge boom-bust cycle that would one day destroy its own momentum. Welcome to that day. In a desperate scramble to revive the magic, the corporate mega-system has turned to inventing realities to posses and sell:  collateralized derivatives, DNA sequences, cultural practices and word combinations are to become the private assets of investors; ancient water reserves are to be owned and the data about your body, routines and history is to be traded on the open market.

The Mayan prophesies – sensationalized and commercialized past recognition – are about the end of one historical era – or “world” – and our emergence into a new one. It matters little whether we view the colonial order as a great generator of human progress or as a crime against humanity.  The news has not yet gotten around. Like in an old road-runner cartoon, the system rushes on, no realizing it has already passed the edge of the cliff. The question is how much damage it will do before more grounded forms of democratic governance and resource management can replace it.

The clash of worlds was on full display in Doha, Qatar this month at the UN climate summit.  The spirits of two distinct understandings of the world wrestled each other in the halls, plenaries, panels and protests. The logic of the market was championed by the wealthy nations, led by the US and determined to block any action that might impede the corporate feeding frenzy. To their elite masters, all that is good in the world comes down to their ability to chew up nature and people and turn them into stock options. A world without that “freedom” would be the purest hell. The other spirit is the reemerging idea of the Commons – the notion that the Earth’s bounty is the common heritage of all who live (or will live) upon it and that stewardship, not consumption, must be our guide. The small, low-lying and poor nations struggled valiantly to give voice to this long-cycle vision in a gathering rigged to suppress it. In the end, the future of our warming world will not be decided by insincere carbon targets agreed on by corporate/government delegates. It will be determined by which spirit takes hold among the peoples of the watersheds, coastlines and valleys of our home planet. In the meantime, in the dark, three ghost ships have slip quietly outward between the islands of the eastern Caribbean and vanish, unnoticed and unremarked, into the night.