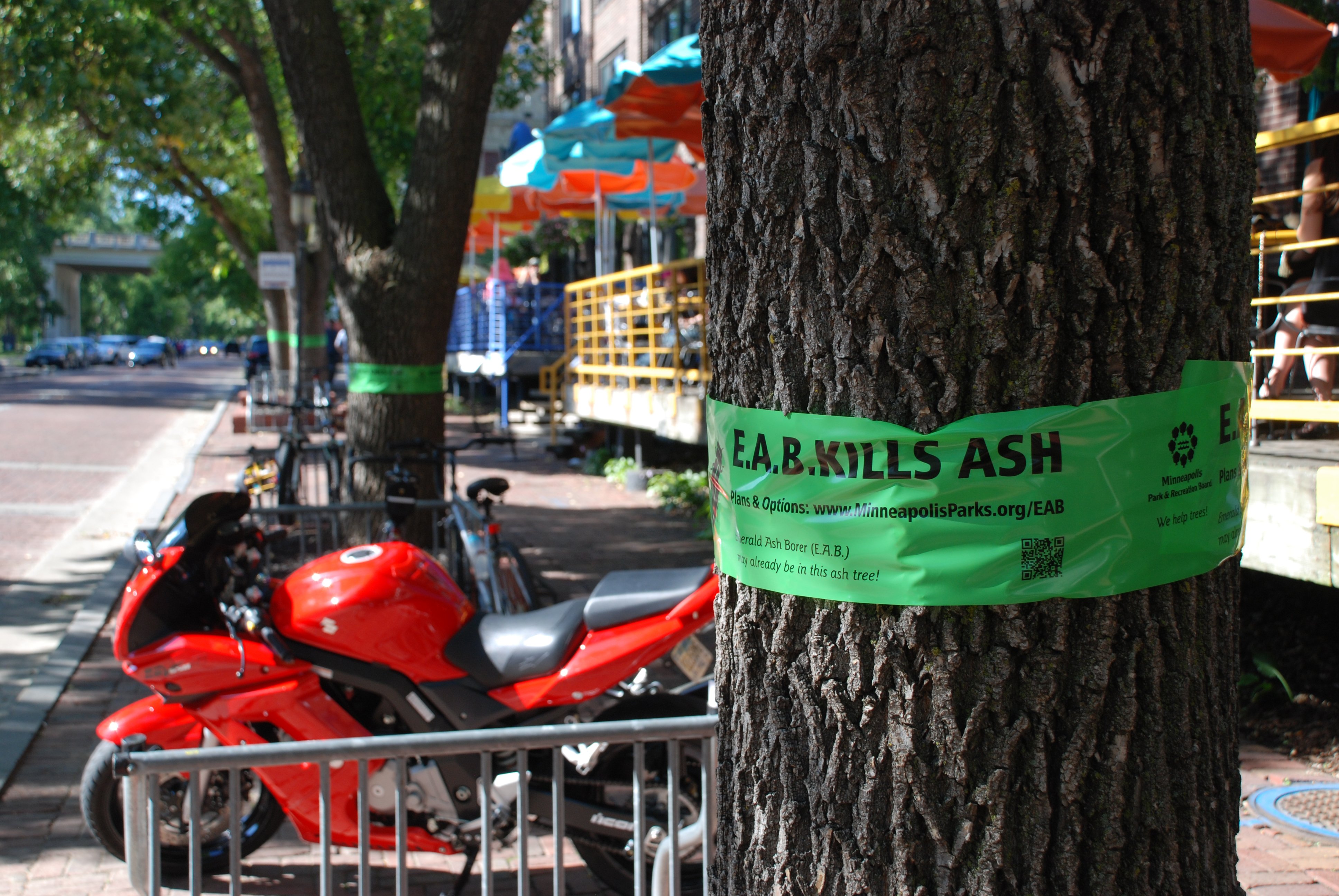 50 University of Minnesota students joined park officials and neighborhood residents on Sunday, September 22, to raise awareness of the emerald ash borer (EAB) that threatens to kill as many as 20 percent of the trees in Minneapolis.

Students tied green ribbons around ash trees on boulevards and in other public areas to call attention to the problem and to identify trees that may have to be removed if the emerald ash borer infests trees in the Marcy-Holmes neighborhood.

Green ribbons had already been attached to ash trees in other parts of the city, including Northeast Minneapolis.

The ribbons will raise awareness and direct residents to the city’s website for more information on how to handle trees in their own yards, said Mary O’Neill, a seasonal forestry worker for the Minneapolis Park and Recreation Board. (Information is also available from the Marcy-Holmes Neighborhood Association, Minnesota’s Department of Natural Resources, and Michigan State University.)

O’Neill and members of Marcy-Holmes Neighborhood Association briefed the students on how to identify ash trees and passed out a map showing the location of neighborhood ash trees on city property.

Although the city replaced elm trees with a more a diverse “urban forest” during the Dutch elm infestation several years ago, the diversity was citywide rather than on each block, said Craig Pinkalla, an arborist for the Minneapolis Park and Recreation Board.

Some blocks may all have ash trees and some others may have all maple trees—another susceptible species—he said.

“In some areas, streets and boulevards with a canopy of green trees today could end up looking like parking lots without their ash trees,” Pinkalla said.

“This crisis could provide an opportunity to plant a greater diversity of trees in each area,” he said. “When trees are taken out because of EAB, they will be replaced with a more diverse canopy.”

The green ribbons demonstrate a concentration of ash trees along Main Street and University Avenue, but Pinkalla and O’Neill said the city will replace the ash trees gradually so they are not all removed at once—unless an infestation creates a crisis.

To protect their trees, residents can have their trees inoculated to discourage the emerald ash beetle—just as some people get flu shots. Like flu shots, these inoculations may have to be administered annually.

Kelly Phillips, who lives at Second Avenue and Sixth Street Southeast, treated several of his trees.

“I didn’t want to lose them,” said Phillips, a Marcy-Holmes board member. “Losing them would dramatically change the appearance of our street.”

Pinkala said what homeowners do with their trees is a matter of individual conscience. “Residents can go to our website to check out the options.”

Some people will cut down their trees; some may inoculate them to reduce the chance of infestation; and some may let them grow without chemical treatment and hope for the best, he said.

City tree-care experts will discuss the problems and explain treatment plans at a public meeting at 5:30 p.m. on Tuesday, September 24, at the First Congregational Church, 500 Eighth Ave. S.E.

In less than two hours on September 22, the students covered the Marcy-Holmes Neighborhood identifying ash trees. Some of them earned public-service points for their fraternities and sororities for awards during Homecoming next weekend.

Several years ago, the city removed a concentration of ash trees from Tower Hill in the Prospect Park neighborhood.

Residents of Southeast Como have identified an infected tree. Como residents are also encouraged to attend the MHNA information meeting.

Read Minneapolis offers chance to get rid of ash before the borer (Margo Ashmore, August 2013)