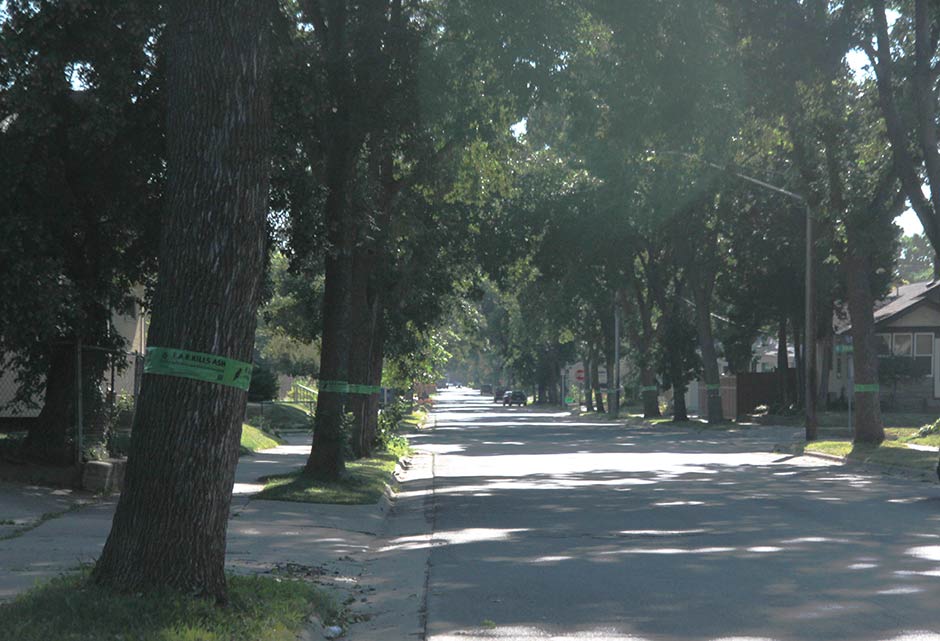 The bright green ribbons are startling. Tree after tree on streets throughout the neighborhood are marked with the ribbon indicating the tree is an ash – doomed to succumb to emerald ash borer.

It’s Just a Matter of Time

In 2009, the devastating work of the iridescent beetle was found in St. Paul near Tower Hill Park. In 2010, it was found in Minneapolis. Ralph Sievert, Minneapolis Park and Recreation Board’s director of forestry, explained that if your ash tree isn’t infected yet, it’s just a matter of time until it is.

Sievert said that it’s the larvae that damage the ash trees – they bore through the bark and feed on interior of the tree. A tree can be infested with EAB for several years before the telltale signs emerge:

Once an ash tree dies, they fall apart quickly and falling limbs can be dangerous, said Sievert. To get ahead of EAB, the Minneapolis Park Board has an eight-year plant to remove all of the 40,000 ash trees owned by the City of Minneapolis and replace them with a diverse forest of trees, such as oak, honeylocust, and ginkgo.

The Park Board has decided to replace the trees rather than treat them with chemicals since the effect of using the chemicals on such a large scale is unknown, said Park Board Commissioner Scott Vreeland. “If we load up 30,000 trees with chemicals that kill all insects [including pollinators], that’s a major ecological impact,” he explained. He added, “If somebody has this great ash tree in their yard, then using the chemicals to treat the tree wouldn’t have as much of an impact…. It’s a matter of scale”

While the final decision on how to fund this project won’t be made until December, MPRB is currently discussing how the removal and replacement of the ash trees will be funded. One option, supported by Mayor Rybak, is a tree levy. Additional support might also be available in the city’s budget, noted Commissioner Vreeland. 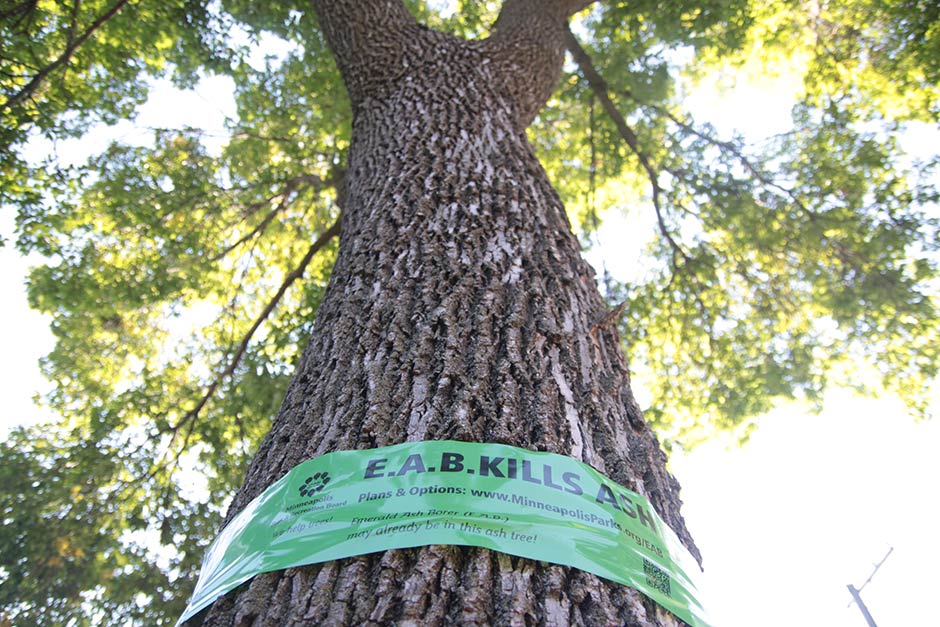 The MPRB is planning on removing only 20% of the tree canopy on a given block each season. You can sign up to request that your boulevard ash tree be removed, and request a replacement. Homeowners also have the option of treating their adjacent boulevard tree with insecticide. However, homeowners are responsible for paying for all treatments. Sievert noted that MPRB did not mark all ash trees with the green ribbon, and you may have an ash on your boulevard that isn’t marked.

Find out more about MPRB’s plans to deal with EAB.Map of boulevard ash trees: