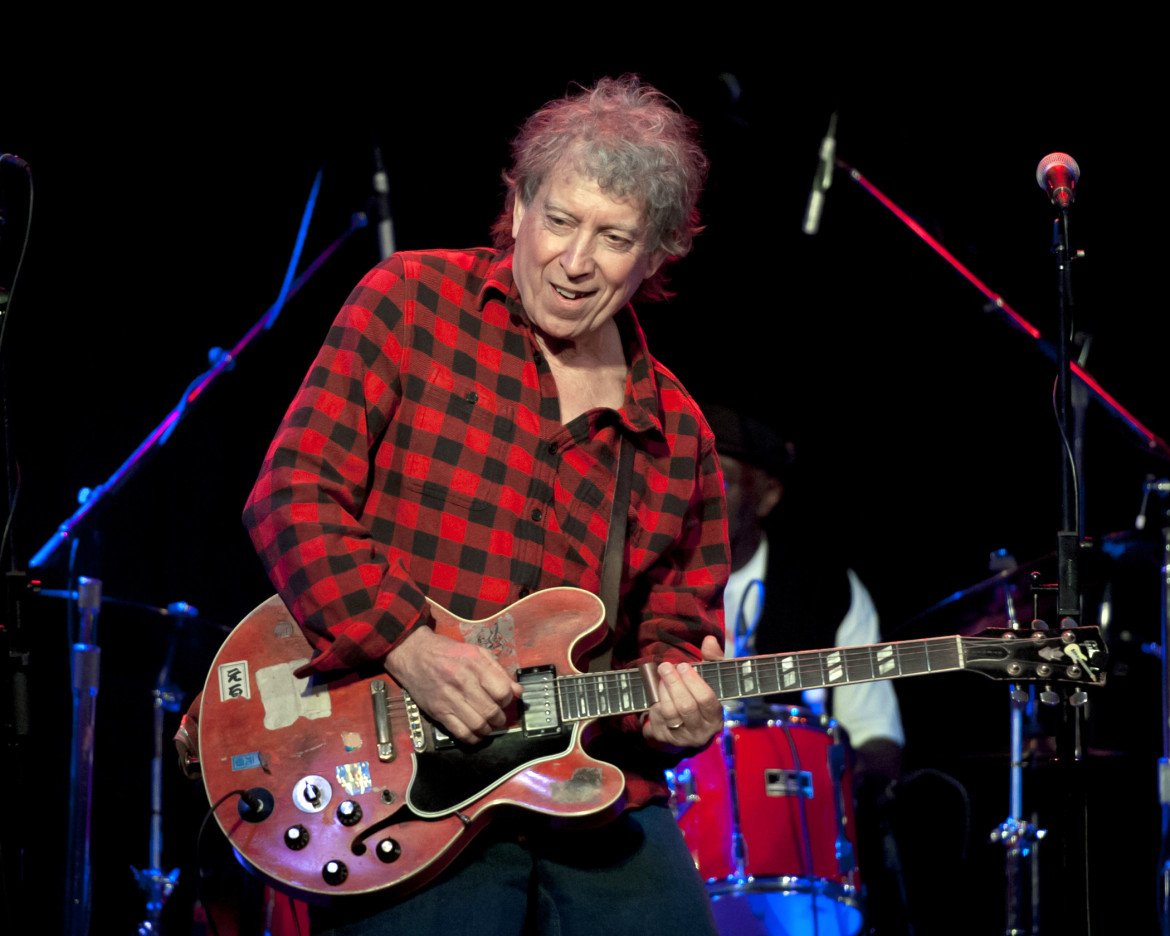 Blues veteran Elvin Bishop truly is an original. Laid back easy as eggs-over.

For those who don’t know, Bishop first broke back in the mid-60s with The Paul Butterfield Blues Band, following his debut a few years earlier, playing behind the legendary Junior Wells. He, vocalist/harp man Butterfield, guitarist Mike Bloomfield and keyboardist Mark Naftalin recorded the discs “The Paul Butterfield Blues Band,” landmark release “East-West” and “The Resurrection of Pigboy Crabshaw” with Bishop poking his head in the door to guest on “In My Own Dream” with his terminally irreverent gem “Drunk Again.” Along with Carlos Santana, he was a guest artist on “The Live Adventures of Mike Bloomfield and Al Kooper” (Columbia Records refused to let them title it “Two Jews Blues”). He’s made 25 solo albums, five of them live and hit the charts with “Fooled Around and Fell In Love” off of “Struttin’ My Stuff”

These days he’s on tour promoting his newest album “Can’t Even Do Wrong Right” (Alligator Records), with characteristically down home, shoot-from-the-hip fare.

He will be in the Twin Cities this month for the Lowertown Blues Festival and granted Twin Cities Daily Planet a telephone interview, chatting from his home in San Francisco, fussing with his dog as he answered the line.

DH: How’d you get so crazy about playing the blues?

EB: From the radio. I heard it and just went nuts. It was the 50s, you know? I lucked up on a lot of guys who were happening then. Jerry Lee Lewis, Fats Domino, Chuck Berry, Elvis and all that…When I heard the blues, I said, “Oh, I get it.  That’s where the good part of [rock-and-roll] is coming from.” This musician, a guy I know, in Hawaii, he teaches at a university and he’s had me come over to talk to his music class. They asked me what’s the difference between rock and blues. I was trying to explain it, just so they could understand. I said, “Well, rock is weed and the blues is hash.”

DH: I love it. You hit big with that single “Fooled Around and Fell In Love”. After that you were, what, I guess?  A star? So many of your contemporaries, even those who got that far, died from drugs. Butterfield, Bloomfield, Janis Joplin, Jimi Hendrix. There’s a whole list.

DH: How’d you manage to keep your skin in one piece?  And what’s it like, looking back as a survivor?

EB: Well, it’s partly luck, you know? That [perhaps] they got a bad bunch of dope, you know?I never was much into [it], not attracted to any of that. [That] helped a little.

EB: Plus, I was afraid of needles. Just aside from that, gradually, as I got older, started taking care of myself. There’s a lot of luck in life. You know how it goes.

DH: Sure. You lived long enough for common sense to set in.

EB: Yeah, you could put it that way.

DH: On the new album you’ve got originals and a mix. How do you go about pulling together the material that you don’t write, making those choices?

EB: It’s stuff I like and feel I can do a decent job on. And I kind of eyeball the musical circumstance I’m in. I’m kind of lucky, because I’ve been writing songs for a long time and I’ve got publishing. One thing I’ve had enough sense to do was hold on to publishing rights. So, I don’t have to worry too much about work.

DH: What you said about publishing puts me in my mind something sad, you know, with B. B. King passing?

DH: I had read in my research to do an obituary, one of his records, they helped themselves to a lion’s share of his royalties. Putting phoney names on cuts, stealing writing credit.

EB: In the 50s that’s a lot of times how it was done. You saw some weird names. I remember thinking back then when I looked on his records  And I saw names and found out later that they were the guys who ran the record label. That was routine practice. But, you know these middle aged white guys didn’t help B. B. King write the blues.

DH: You’re with Alligator Records, legendary blues label.  On the order of, well, Arhoolie Records. You know, historic. Even for a veteran that has to be special.

EB: Well, it seems to be a good place to be, yeah. Basically, it’s the only blues label left. Major blues label. And the boss there, Bruce [Iglauer] is a real nice guy. Knowledgable and smart.  He’s got all the bases covered, you know.

DH: Paul Butterfield had that album, “The Resurrection of Pigboy Crabshaw,” referring to you.  Where on earth did you get the nickname Pigboy Crabshaw?

EB: I don’t know. It’s some kind of foolishness. Don’t even remember how it happened.

DH: The title cut on “Can’t Even Do Wrong Right.” It’s got the same home-spun, hilarious sarcasm you got with “Drunk Again”.

EB: Yeah. Some dumbass criminal does something like commits a crime and leaves his i.d. at the scene or they find him stuck in the air-conditioning vent in the morning. I thought I’d try and write a song about that guy.

DH: You were the original Paul Butterfield Blues Band lead guitarist. What was it like working with Butterfield, and with Mike Bloomfield after he came along?

EB: It was the best apprenticeship a fellow could ever hope for. A good educational experience for me. Set my standards real high musically and performance-wise. And just a whole lot of fun in general.

DH: What’s next on the horizon?

EB: Well, I’m beginning to feel vague stirrings of some ideas for tunes for the next record. So, I’ll do a little writing pretty soon. Play the gigs, this summer. We’re playing festivals and a lot of stuff like that. Things I like to do. Things I enjoy. I don’t play any gigs unless it sounds like fun.