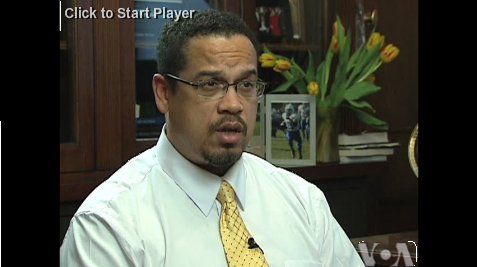 Rep. Keith Ellison says that the non-violent protests in Egypt delivered a strong rebuke of the tactics of al-Qaeda and religious extremism. In an interview with the Voice of America, he also said that concerns about the Muslim Brotherhood in Egypt were overblown, noting that the group’s popularity is low.

On al-Qaeda and religious extremism, Ellison said, “They also say that the only way to achieve change is through violence and terrorism and murder. Well, the people in Tahrir Square showed that if you stick, and you stay, and you stand up for what you believe in, that you will be successful and you don’t have to harm anybody to do it.”

Republicans have claimed that President Barack Obama is too friendly with the Muslim Brotherhood, but Ellison said the controversial group does not have majority status.

“My view is that the Muslim Brotherhood is a part of the fabric of Egyptian society,” he said. “Democracy means that we don’t get to decide who runs that country. The people of that country decide that. The Muslim Brotherhood, by the way, has never polled at more than 22 percent. The population is really not calling for more religion, they are calling for bread, peace, freedom and dignity.”

Former Gov. Tim Pawlenty has been one of those Republicans warning about the Muslim Brotherhood.

When Obama recently said something similar to Ellison – that the Muslim Brotherhood doesn’t have majority statuts in Egypt – Pawlenty called it “appeasement” during his CPAC speech.