Elizabeth Dorsey Hatle’s introduction to The Ku Klux Klan in Minnesota (History Press, $19.99) begins, “The overt whiteness of Minnesota in the 1920s makes the Ku Klux Klan finding a home in the state incomprehensible to residents today” — whatever that means. It is clear, however, that while the covert racism that yet prevails in this state might not do the Klan proud, it resolutely upholds its supremacist creed.

For instance, there is the constant hue and cry from Black businesses that get shut out of sweet, lucrative contracts to construct sports stadiums. Even the mere existence of Black business in Minnesota is a miniscule percentage. And judging from the behavior of some members of the Minneapolis and St. Paul police departments, it seems they had their training in a Klan camp.

The white sheets and hoods are gone, but the “Invisible Empire” is quite alive in spirit and deed. Minnesota, widely lauded for what is said to be social progress, was, truth be told, as Hatle notes, “one of the last states in the Midwest to give up on the Klan.” Public disassociation does not dispel an entrenched conviction to sustain the cherished delusion of superiority.

This state is by no stretch of the imagination by itself. America by and large should not be caught dead saying a word about terrorism from abroad until it owns up to the Ku Klux Klan and does something about its still far-reaching doctrine. It’s a doctrine that tells White men, women and children when they glance in a mirror, when they watch television, go see a movie or look at a magazine cover that the world is all about them. Importantly, that everyone who is not them is less-than — less than human. Consider.

In 1965, after mounting protests against the Vietnam War spurred men to burn their draft cards, it swiftly became a crime to burn your draft card. Yet despite literally centuries of hangings, there has never been a federal law against lynching people.

ABC News documents, “At least 4,749 Americans are known to have been lynched during a time when the Senate failed to act on some 200 anti-lynching bills.” The Ku Klux Klan in Minnesota earnestly, diligently, even exhaustively informs in a what-you-never-wanted-to-know-about-the-Klan sense. 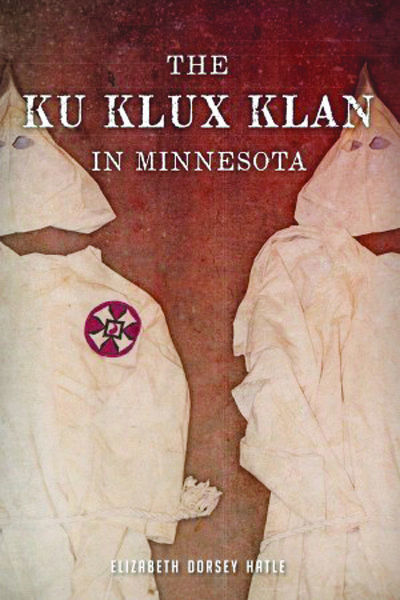 You get a timeline of how and where the organization made its way into politics, law enforcement, prominent social circles and other venues of power. As well, Hatle’s book walks you through a veritable museum of Klan memorabilia.

It had to, of course, cover the 1920 lynching by a Duluth mob of three circus workers — Elias Clayton, Elmer Jackson and Isaac McGhie — all three Black men minding their own business. All it took was the age-old bugaboo about Black men violating the sanctity of White womanhood.

This, by the way, was the subject some years ago of The Last Minstrel Show, a musical Penumbra Theatre Company produced at The Great American History Theatre. The cops and the court in Duluth were in on the crime from the outset, from the arrest to letting the criminals break in and string up Clayton, Jackson and McGhie to the acquittal of four White men and the conviction of three others for nothing more serious than rioting.

Needless to say, a great deal of The Ku Klux Klan in Minnesota is disquieting. It is not a coffee table book. A drawback, it waxes interminably academic in dry language.

No two ways about it, though: Elizabeth Dorsey Hatle rattles a very ugly skeleton in progressive Minnesota’s closet.