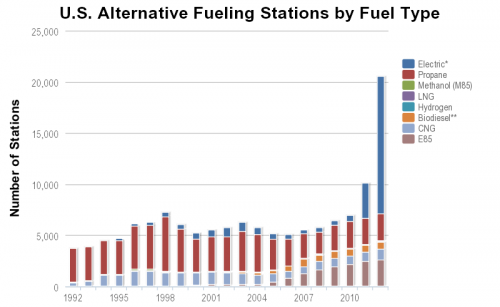 Something remarkable happened last year: The country’s mix of alternative-fueling infrastructure for cars suddenly flipped from being dominated by biofuels and lighter fossil-fuel byproducts to being primarily composed of electric charging stations—at least if you go by the pure numbers.There is an asterisk by “Electric” in the legend of the chart above, and the footnote says that each individual charging port is counted separately. But there were still 13,392 electric-vehicle chargers by the end of 2012, and even if the number is inflated by four or five times, it still outstrips the 2,654 stations for the nearest competitor—propane. If that sudden spike in growth is the beginning of a trend, electric chargers will be in the clear majority soon.

In other news, who knew that propane has long been the most common alternative fuel out there? And the fact that it has been slowly decreasing in popularity? It sure was a surprise to me when I saw this data graphed on the Washington Post‘s Wonkblog last week, in an article bemoaning the slow adoption of natural gas as a fuel. Natural gas also used to be propane’s main rival, but has now slipped to be the 4th most accessible alt-fuel.

Of course, public electric charging infrastructure isn’t everywhere yet. but electric fueling has always had a huge potential simply because of the pervasiveness of electric power in our lives. An electric car is most readily recharged from a high-voltage, high-amperage line, but if you have patience, a regular 120-volt socket can do in a pinch. The data for the chart above also ignores home charging stations—something that can allow an EV owner to completely avoid the need to make an extra stop to charge up if daily driving is always within the car’s total range.

I’ve seen a number of pure electric and plug-in hybrid cars on the road. The Nissan Leaf and Chevrolet Volt models are the ones I notice most readily, though I’ve also seen a Tesla Model S (not yet sold in Minnesota) and a Mitsubishi i-MiEV (which I’m suspicious may have even been Canadian). It’s nice to see a technology that had been talked about for so many decades finally begin to appear nationwide and not just tucked away in the most populous or polluted areas of the country. It’s also a stunning rebuke to the much-hyped hydrogen car, which boasts a mere 10 public filling stations in the entire U.S. today.

There’s still a lot of room for electric charging infrastructure growth, though. There are about 120,000 or 160,000 gasoline filling stations around the country, depending on whose numbers you look at. While charging at home or at work shaves off a lot of the need for public chargers, there will still be markets to serve for those who can’t charge at home (such as apartment or condominium dwellers), folks who are traveling longer distances, and others who simply forgot to plug the car in overnight. It’s also going to take a while for fast-charging infrastructure to become standardized. Tesla Motors is deploying their own “Supercharger” network for the Tesla Model S because the industry-standard SAE J1772 charge plug doesn’t yet handle the high voltages and amperages that the Tesla is capable of drawing.

Geographic coverage is also still lacking. EV chargers have mostly been deployed around major cities, but are still almost completely absent in some rural states. There are zero public EV chargers in Wyoming, according to government data, and only one in Montana. North Dakota apparently has two—one in Fargo, and the other in Grand Forks. While that pure electric Minneapolis-to-Seattle trip might have to sit on the back burner for a while longer, there has been a dramatic change in just a few years, and it is likely to continue.

At top: Electric vehicle charging stations have appeared across the country in a flash. (Source: AFDC)