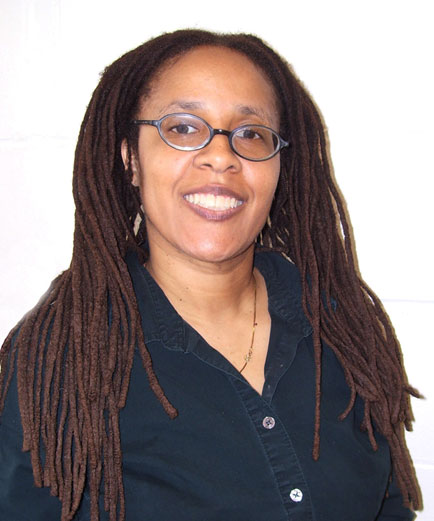 Stephani Booker has been an election judge for over 10 years. (Photo by Amy Buchannan)

She became a judge by first responding to information in her City of Minneapolis water utility bill. Among several pieces of junk mail was an insert with a number to call for more information.

According to the Office of the Minnesota Secretary of State’s website, in order to be an election judge:

The State of Minnesota offers two-hour training sessions throughout the state where judges learn the rules and the regulations of the voting process.

There are several different roles that judges play during the election process. On Election Day, they set up and close down the polling place for voting. There is a greeter judge who meets the voter at the entrance and determines if they are at the correct polling place. Voters are then directed to the appropriate table of either registration or roster judges (who will locate the voter’s name on the precinct roster where the voter will sign).

Another judge will hand the voter a ballot. Another may demonstrate how the ballot should be filled out. After voting, another judge is on hand to give instruction on how to place the ballot in the counting machine. After the polls close, judges will determine and certify voting results.

Each election judge’s role is “interchangeable. Throughout the day people trade [roles],” Booker explains. She called the phone number on one of the pieces of mail contained in her utility bill, was set up for training, and was then assigned a polling location.

“You can specifically request to get assigned a polling place in or near your precinct. Mine is in my precinct. I can walk to it,” Booker says. Judges may be assigned a different polling place if there are too many or too few judges at a specific location.

There is no limit to the number of times a judge can serve: “I’ve been an election judge for over a decade now, since the late ’90s-early 2000s,” Booker says. Every election year she can expect to get a call asking if she would like to serve as judge again, and if she agrees she is scheduled for another two-hour training.

With the upcoming election next week, Booker gave us a preview of what to expect at the polls.

It’s not uncommon for voters to show up at a polling place and approach an election judge saying, “Oh, I just saw that ‘Vote Here’ sign on the street, so I decided to stop here and vote,” Booker explains.

However, the ‘Vote Here’ sign is not a voting invitation to every eligible voter. It is only an invitation to vote for those who currently live in that particular precinct.

“There are different elections going on in different parts of whatever city you live in,” explains Booker. “If you don’t live over North, you shouldn’t be voting for the Fifth Ward city council member [on a North Minneapolis ballot]… So it’s very important that people recognize that you have to vote where you [currently] live.”

What if my address recently changed?

She says that often voters will show up at the polls with a Minnesota driver’s license to prove residency but inform the election judge that the address on the license is not current. A change of address often means a change in polling place.

If you have recently moved, you should bring to the polls a driver’s license or State-issued photo ID — even if it has the previous address — as proof of who you are. “Then you need to bring a utility bill [with the] address that you actually live at right now,” Booker says. This includes bills for electricity, gas, water, phone or cell phone, cable or satellite, Internet services, solid waste or sewer services, current student fee statement or “a rent statement — not a lease — a rent statement, as well.”

Each of these must be dated within the last 30 days. A document verifying an address change is necessary even if you’ve moved to a different apartment number within the same building. If you have none of the documents listed above, a registered voter who knows your current address and lives in your precinct can vouch for you.

Do I need a photo ID?

Although Minnesota voters are voting on the voter ID amendment in the upcoming election, a photo ID is not required to vote in this election.

“Remember, you do not have to show us your ID for this election,” Booker says. “People are free to show their ID to help us find your name [on the precinct roster], but we are not supposed to use it for anything else.”

Booker emphasizes, “We’re not even supposed to mention the word ‘ID. We’re supposed to say, ‘You don’t have to show us that’” if voters offer their ID.

As for voting on the two amendments on the ballot this year — voter ID and the marriage amendment — Booker suggests voters familiarize themselves with the language on the ballot before showing up at the polls.

“When it comes to those amendments, we have to tell people that the full instructions for the amendments are [on the ballot]… So please don’t try to ask us to explain things, because that might make us [look] biased one way or the other,” says Booker.

It is advisable for all voters to familiarize themselves with the ballot before entering the voting booth.

For more information on becoming an election judge or for additional information on voting, including viewing actual ballots and information on polling places according to your address, go to the Office of the Minnesota Secretary of State’s website at www.sos.state.mn.us.