As the months roll by, we have more data rolling in as we close in on the November election. Despite some reason for optimism at the start of this year, there is no doubt that the economy is stalling again – making Obama’s job more tenuous.

How bad is it? We won’t know until we get there, but the latest job figures show that we’re treading water. It could be worse – we could be drowning. Whether that’s a good enough case politically won’t be known for a few more months. But so far we know the economy is not a good bet.

The May ADP jobs report came in with a blah 133k jobs created in the private sector. More shockingly, all the growth came in the service sector – manufacturing jobs actually went down slightly. The overall private jobs picture since February 2009, the month after Obama’s inauguration looks like this: 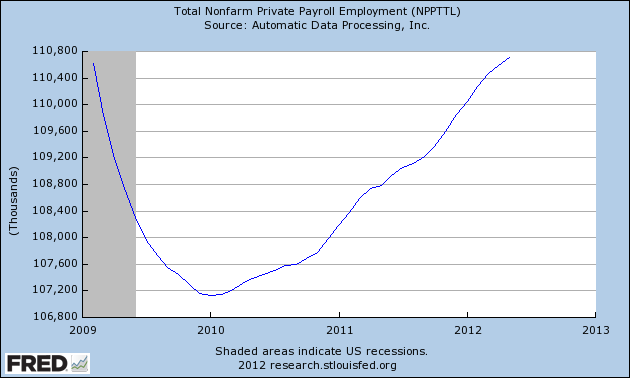 What happened to the economy that seemed to be roaring back at the end of 2011? It’s common to blame gasoline prices, which spiked well over $4 per gallon in much of the nation. They are coming down rapidly as the price of oil (as West Texas Intermediate crude) heads back to the low end of its range of $80-$110 per barrel. In Obama’s favor is the fact that gasoline should stay low through November at this point, since the dysfunctional market for oil bounces its 38% (!!) up and down over a period of more than a year.

It’s somewhat less common to blame Europe in the popular press, although that is a bigger problem that does have everyone’s full attention now. Their economic growth is flat at best, with the UK and Spain clearly tipping into recession while Germany chugs along weakly. The potential for default and disaster is weighing even more heavily than the underlying economy, which buys a lot of our exports including food.

Worse yet, economic growth in the first quarter of 2012 was revised downward, yet again, to 1.8%. Since it takes up around 3.3% to start creating jobs reliably, we aren’t doing well by any measure. But at least it’s not negative.

If this election is really all about the economy, is there a catchy slogan along the lines of “Obama: It could be worse”? It doesn’t sound like a winner, but that’s what we have right now.

For most people, of course, the economy is more about how they can survive – Obama’s re-election doesn’t matter at all. The prospects for some kind of optimism that will get people to start making things happen were probably hurt more by the terrible stock market performance in May, including the Facebook disaster. Without more faith that the economy could turn around, employers large and small are unlikely to hire. That keeps us stuck in neutral probably through the summer, when minds wander and investment is always thin.

In short, the second quarter of 2012 is turning out to be very blah at best, and even that is terrible news for a re-election campaign that needs to beat the buzzer to ice this thing. Some kind of big international bail-out of Europe could still turn that part of the equation around in time, but sending a pile of money overseas this close to an election would only give the other side something to rail against.

The forward momentum that started off the year has died down and we’re going into the summer running on empty. Cheaper gasoline is the only thing that will seem positive when we do stop to fill the tank. Will it be enough?