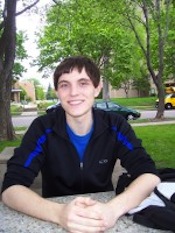 GG: So what are the most important issues to you in the upcoming election? They can be local, state, national, whatever is closest to you at this point.

GK: Well definitely the economy is a big looming issue and any resolutions or solutions that would help to advance the economic situation. Probably also healthcare, looking forward, especially for the growing elderly population. And then also the student loan situation has piqued my interest for sure because (laughs) I’m a student and going to college isn’t cheap. So those are probably three issues that I would pick right off the top of my head.

GG: So keep going a bit with the student loans.

GK: Okay, well I’m not terribly versed on the topic. I’ve just read a couple articles in the Star Tribune and stuff, but I mean…

GG: Well you are a student and I’m sure you have some loans…

GK: Yeah definitely, as a student with loans I’m not too keen on paying more interest than…I mean I understand where both sides are coming from but I just (laugh), being more selfish as a young student who already has lots of money to pay back, I really don’t want to pay more even though I understand where the Republicans…well I guess it’s just a dichotomy between both sides, like it is with most American politics.

GG: So you understand both sides, but you’re just looking for some sort of resolution.

GK: Yeah, definitely. I mean overall I wish American politics would be less partisan. I wish both sides could find a way to work together more and really try and benefit the whole nation instead of just their political parties. But at the same time I know if they don’t, they’ll lose most of their backing. So it’s a slippery slope.

GG: Yeah. So back to healthcare. What is it specifically about healthcare that you want to see changed?

GK: I would like to see more universal healthcare. I think that would be really beneficial to most people. I mean my mom actually works for the state and she works for senior health programs and she’s big on universal healthcare. As far as my opinion goes, I think it’s good for everyone to have at least a certain amount of guaranteed healthcare, at least to some degree. I think it would be really beneficial to all citizens.

GG: Okay. And now the big one. The one you started out with, the economy. What is it about the economy that worries you right now as a student? What would you like to see change based on political decisions?

GK: Well as a college student, eventually looking for a job, I would really like for the job situation to improve. I’m not sure how they would go about that, I’m not too political of a person. The availability of jobs is a big thing on my mind, especially looking toward the future.