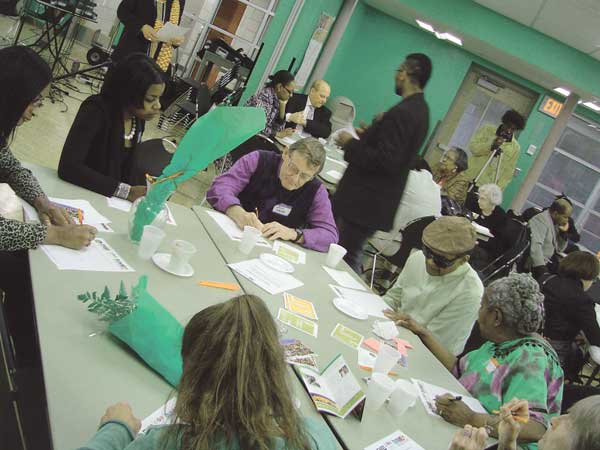 Elders share their ideas on effective ways to educate at the Elder’s Circle. (Photos by Jamal Denman)

These elders were honored by Elder’s Wisdom Children’s Song, a program that creates intergenerational relationships and learning opportunities for young people through the experiences of elders. West Metro Education Program (WMEP), a consortium of 11 districts that includes Minneapolis and the surrounding metro area, hired nationally known Smithsonian Folkways recording artist and activist Larry Long, who created Elder’s Wisdom Children’s Song, to produce and present the event in multiple sites around the West Metro area. Over the past six years, the program has honored over 350 elders from various West Metro communities. 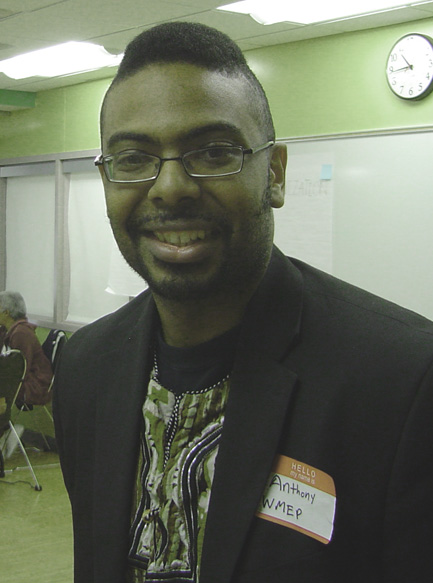 Each year WMEP and Long collaborate to produce Elders’ Circle so elders and educational professionals can meet each other, share experiences, and exchange ideas about creating enriching learning opportunities for young students enrolled in public schools in the metro areas.

Anthony Galloway, WMEP Student Learning Program Specialist, says that the purpose of Elder’s Circle was for people from different professions and access to various resources to “connect and make some connections with the schools.” He went on to describe how the gathering has progressed in the three years since they started hosting them:

Live entertainment was provided by jazz legends Irv Williams, Jeanne Arland Peterson, Billy Peterson, and Tonia Hughes. Students from Elizabeth Hall International Elementary performed an inspirational song (song lyrics were provided so everyone in attendance could sing along). They also took time out to give special thanks to Diane Robinson, founder of Hollywood Dance Studios in North Minneapolis, for working with them and sharing her life story, expressing their appreciation and presenting her with flowers and a photograph.

Bennice Young, the principal of Elizabeth Hall International, talked about her passion for working with youth and how Elder’s Wisdom Children’s Song impacted her kids: “I had no idea how powerful an experience this would be for our students in several ways,” which included learning about the existence of and making a connection with community elders.

YMCA of Metropolitan Minneapolis President and CEO Harold Mezile spoke of his experiences working with Larry Long and the importance of working with and inspiring young people. Nicole Randolph, Center Director at the North Community YMCA, also spoke, providing information about youth programs and helpful resources.

The elders in attendance, who each represented different school districts in the metro area, were instructed to lead group discussions in a breakout session. In these sessions, the groups were asked to think about and identify effective ways to educate and nurture young people. The process was to brainstorm ideas. The second phase was to discuss what would be needed to make ideas actually happen.

Galloway expressed confidently that once the ideas are formed and needs are identified, things can be set into motion, and “We’ll have intergenerational learning popping off in almost every single aspect.”

Intergenerational learning is something that Larry Long and his organization, Community Celebration of Place, is very passionate about. Outside of being executive director for Community Celebration of Place, Long is a nationally recognized folk singer who honors elders and “unsung heroes” in his professional work. He was subsequently invited in to various schools around the country to share the stories of elders with young people.

“We began honoring people of many complexions and many nations in order to build bridges and to get rid of fear, and to integrate these life stories into the curriculum of public education… Out of that grew Community Celebration of Place,” Long explains.

The event brought many passionate members of the community, like Michael Chaney, original founder of the Twin Cities Juneteenth celebration and the founder of Project Sweetie Pie, who recited a fiery oratory concerning the youth and future of North Minneapolis, making statements such as, “Where once lied urban blight now sit luscious garden sites: gardens without borders, classrooms without walls. Architects of our own destiny…”

For the first time, the Elders’ Circle event was held in Minneapolis; but organizers say that it will not be the last. Both Galloway and Long feel strongly about bringing more positive publicity to the North Minneapolis community.

Community Celebration of Place will host additional international celebrations on May 9 at Elizabeth Hall International Elementary at 1 pm, and May 17 at Hmong International Academy at 7 pm.

For more information on Elders’ Circle 2012, go to www.communitycelebration.org.