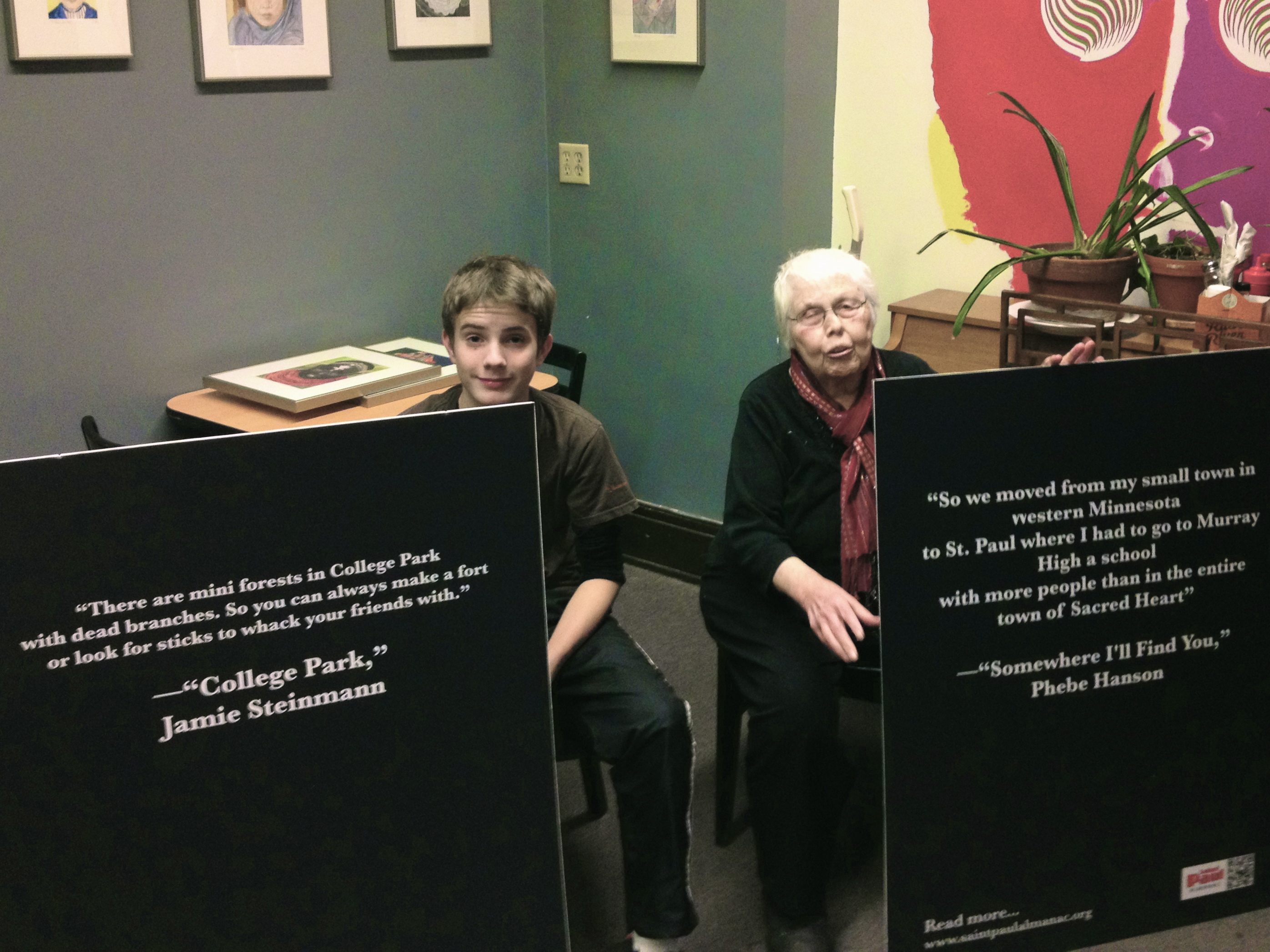 Tonight we photographed more authors for a feature that will be published about our Irrigate Arts-funded projects “Lowertown Voices” and “University Avenue Voices.” The two projects consist of 14 large scale posters and one 200-square-foot banner that have been installed at various points along the light rail corridor. The posters and banners feature excerpts from stories originally published in The Saint Paul Almanac.

Diego Vázquez, Jr. is taking the photos of the authors with their posters. We had a batch of folks come to Golden’s Deli in Lowertown on Saturday and we had another group come this evening. It has been a thrill to meet the writers and to see them paired with their words, printed big and bold in white on black background.

Tonight it was my honor and pleasure to chauffeur local lit legend Phebe Hanson. I told her that I remember her from high school when my English teachers Sara Sexton and Larry Risser (Southwest HIgh, Mpls) brought her in to speak to our class about journal writing. I even brought out my copy of 25 Minnesota Poets (from 1974), in which she is featured, and asked her to sign it. In it she noted that today is Emily Dickinson’s birthday. She told me in the car that she has been throwing parties for Dickinson since 1972.

Phebe is sharp and fun and charmed the room when she reminisced about Murray High School which she wrote about in her piece “Somewhere I’ll Find You.” She recited Abou Ben Adhem, a poem that she learned for English class in 1942,

Abou Ben Adhem (may his tribe increase!)
Awoke one night from a deep dream of peace,
And saw, within the moonlight in his room,
Making it rich, and like a lily in bloom,
An angel writing in a book of gold:— (etc)

She told us about the culture shock of moving to Falcon Heights and attending a big city school after growing up in small-town Sacred Heart. She entered Murray High School in eighth grade, age 14.  I had to get a photo of Phebe with Jamie who also is one of the authors featured in the project. He is currently in eighth grade at Murray Junior High. However, memorizing poetry is no longer part of the curriculum. A few things have changed in 70 years.