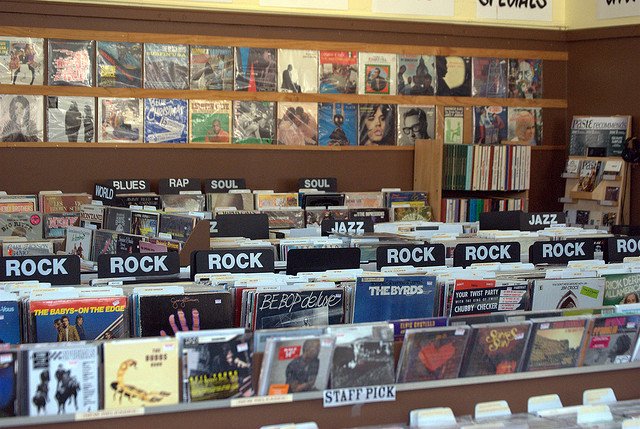 Saturday, April 19 was Record Store Day. To celebrate, my favorite nine-year-old and I visited eight record shops. I must admit I’m not a big buyer of records (or CDs), but I like to support local record shops so it was fun to be on a mission to visit as many shops as we could in a day. The Twin Cities has some great record shops!

We started at Electric Fetus, a shop I visit often to see live bands and get tickets for shows. We arrived about 9 a.m., just in time for Jeremy Messersmith and Brian Tighe, and Glam Girl Donuts. All were very good. Electric Fetus has a little bit of everything for music; a great sample of bands played throughout the day. They also have some of the best dresses in town. And that is where I spent half of my money today.

Stop No. 2 was Treehouse Records—an old school secondhand record shop. There’s a musty smell that screams bargains. The walls are adorned with posters from every show you went to see in the 80s—if you are exactly my age. If I bought records, I think this is where I’d hang out a lot. For Record Store Day they were selling a “warehouse find,” TVBC albums—a great St. Paul band from the 80s.

Stop No. 3 was Fifth Element for hip hop and R&B music, clothes and lots of other stuff. The shop has a very new feel and great graffiti over one wall. In fact, we bought a beautiful book of graffiti. The folks in the shop were very friendly and welcoming, asking if we were buying stuff for ourselves or someone else. I think they were relieved to hear that we were purchasing a gift. But again very friendly!

Stop No. 4 was Roadrunner Records, another old school secondhand shop for grown ups with grown up tastes. They had plenty of jazz and were playing jazz when we visited. They had a nice collection of Record Store Day special albums for sale. They had cassette and 8-track tapes. It was an impromptu history lesson for my 9-year-old!

Stop No. 5 was Extreme Noise, a shop that specializes in hardcore punk and noise. They had hotdogs and pastries, and a few special albums available for purchase for Record Shop Day. There was very much a community feel to the shop; everyone seemed to know each other and they were very up-to-date with posters promoting upcoming local shows. (News to me: Impaler is back on the local tour! Not news to me: there’s a great noise show coming up April 28.)

Stop No. 6 was Hymie’s Vintage Records. They make a whole street festival out of the day. They had music playing inside and out. We saw the The Poor Nobody’s, a great band with an accordion. Hymie’s is a big record shop with a wide range of music genres. There is a listening station with a record player—something my nine-year-old had never seen. And they had the one Record Store Day release that would make me buy a stereo – Southern Culture on the Skids with Fred Schneider.

Stop No. 7 was Eclipse in St Paul. It’s small, but well placed right next to the Amsterdam Bar. They have records for a wide range of music tastes. They had a series of performances lined up for Record Store Day, we happened to be there as DJ Jake Rudh spun cool tunes. They have a great collection of 45s and a very new smell. We are fans of Eclipse but residents of Mac Groveland, so we miss them on Grand Avenue.

Our final stop for a day was a quick trip to Into the Void, a heavy metal record shop snuck just off West 7th Street in downtown St Paul. The posters are fantastic, there’s a wide range of heavy metal from old school Thin Lizzy – well I think we left some Thin Lizzy there – to local, thrasher and a little death metal. The bonus was being surprised by a friend who now works at the record shop – a great way to end a fun day!