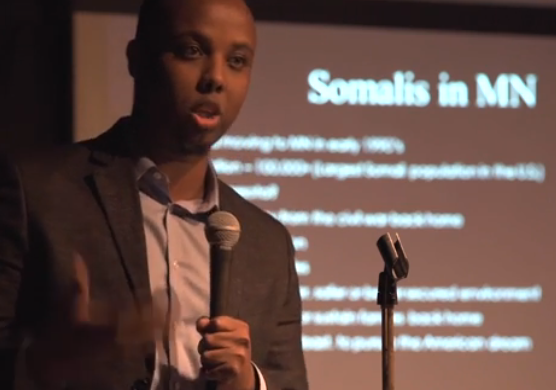 Mohamed Farah is co-founder and Executive Director of Ka-Joog, which enriches the lives of Somali-American youth in Minnesota through mentoring and guidance on education and employment. This month he joined other Minnesota leaders at the White House Summit on Countering Violent Extremism to talk about ways to prevent youth from being recruited by international extremist organizations. He received the 2012 City of Minneapolis Youth Leadership Award and FBI Director’s Community Leadership Award, and has also testified before the US Senate about Al-Shabaab recruitment and the critical importance of improving opportunities for Somali-American young people.

EDTalks is a public speakers series that engages young professionals in public education issues in the Twin Cities. This EDTalk was given on October 28, 2014 by Beverly Cottman, a folktale storyteller and retired Minneapolis Public Schools teacher.

EDTalks is presented by AchieveMpls and The Citizens League in partnership with Twin Cities Public Television, Young Education Professionals – Twin Cities and Young Professionals of Minneapolis. It is sponsored by a generous donation from the Verne C. Johnson Family Foundation, with additional support provided by the Bush Foundation. Video by Jeff Achen and published with permission from AchieveMpls.