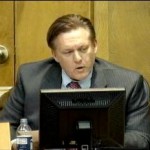 The Eden Prairie City Council approved an ordinance creating a domestic partner registry on Tuesday night. The city becomes the 18th in Minnesota to offer a domestic partner registry and passed overwhelmingly, except for Council Member Brad Aho, the council’s endorsed Republican member, who spoke against the ordinance for nearly 10 minutes before casting the lone vote against it.

“Marriage strengthens our society and that’s why we honor and give it benefits specific to marriage. If the people of Minnesota choose to redefine marriage in the election year this year that really going to be addressed at the state level,” Aho said.

However, contrary to his statement, the anti-gay marriage amendment slated for the 2012 ballot would not “redefine marriage” but would place a ban on same-sex marriage into the state constitution. If the ballot measure fails, same-sex marriage will remain illegal.

Aho continued, “Local city government has no business trying to define this without a vote of all residents. This ordinance undermines the foundation of our society being based on marriage and infers that any relationship is equal to marriage between one man and one woman.”

He then said that since married couples don’t have their marriages registered with the city, it is discrimination.

“It is discriminatory against married people. We don’t have a registry of married people at the city level. Why are we wasting time on something that affects so few people?”

Aho later added, “I think this means that marriage doesn’t matter anymore. It undermines the state of marriage and says that being signed up on a domestic partner registry should afford the same rights as being married.”

But the rest of the council thought the registry was a great idea.

Sherry Butcher Wickstrom said, “This is not just a way to talk the talk but to walk the walk.”

Kathy Nelson said that even if it helps a few people, it is worth it.
“If it will be helpful, I don’t see any reason not to do it. I don’t see this as a political statement
It costs us very little to do and it can help people.”

Mayor Nancy Tyra-Lukens said she received very little negative feedback on the issue. “In city government, you hear the negative. I was anticipating hearing a lot from the people opposed to it” but said she was surprised that that didn’t happen.

She added, “This will do nothing to impact or lessen the validity of my marriage. Elder couples, gay couples, couples that aren’t married yet that take advantage of this are a productive part of our city.”