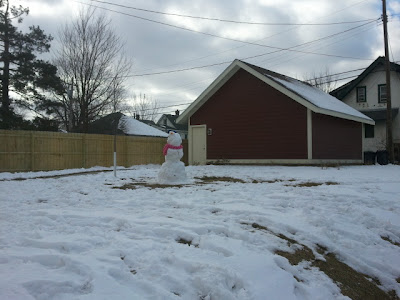 While the connection might seem tenuous at first, this picture of a snowman in the Hawthorne EcoVillage was the most inspiring sign of neighborhood progress I’ve seen in quite some time. Telling the whole story from start to finish would take far too long. For the sake of people new to NoMi, here’s a 3-sentence history lesson:

The EcoVillage area, with 31st Ave N and 6th St N at its center, was once among the most crime-ridden parts of the entire city. Only a few years ago one resident said, “It wasn’t a matter of if we were going to get shot, it was only when.” Now the development area is thriving.

So I was driving through an intersection that was once an epicenter of violent crime. The formerly vacant house that was on the corner was frequently broken open, used for all sorts of unsavory activities, and eventually driven quite literally into the ground. After its demolition, PPL built a home that is certified by Minnesota Green Communities and a whole host of other environmental and health organizations. And the home was built by Mitchell Construction, a locally- and minority-owned business.

But I knew all of this already, so why did the EcoVillage snowman represent such progress?

Because this intersection was once a place where open-air drug dealing happened, and where people were getting shot at on a fairly regular basis. And now it’s a place where children are safe building snowmen in their yards. Now that’s progress. That’s inspiration.

I drew on this inspiration on the same day I took this photograph. That day began with the top story on my Facebook feed about a family whose home was shot up. Call it the grace of God, or luck, or whatever you like, but thankfully nobody was injured. This was a Hmong family, and so I wanted to make sure someone had reached out to them in their own language if that’s what they needed.

Obviously I don’t speak Hmong, but I do know houses. From the news video, I recognized an Urban Homeworks rehab in the background, and had some idea of what this family’s house looked like just from the architectural features on the inside. I drove to the block where it was, and narrowed it down to one of two homes. I passed that information on to partners at CURA who do Hmong organizing through soccer and youth programs at Farview. They’re working on setting up a visit with this family and the new Hmong-speaking police officer. This kind of support is exactly the reason people fought so hard to successfully get a Hmong officer on the day shift in our precinct.

If you’re looking for a neater, tidier end to the second story…well I don’t know what your life is like, but mine is full of stories that haven’t really ended yet. But I can tell you exactly how I want this story to end: with a snowman in the yard.