Wouldn’t it be great if there were still such a thing as a freshwater fish untainted by mercury? A fish that doesn’t carry any dire warnings for pregnant women and children? A fish that tastes as fresh as the fish you vaguely remember catching in your pristine childhood? Ladies and gentlemen, such a fish still exists, thanks to the decades-long efforts of an old hippie named Herby Radmann, in a place known as Bullfrog Farm, through an enterprise called Eat My Fish. 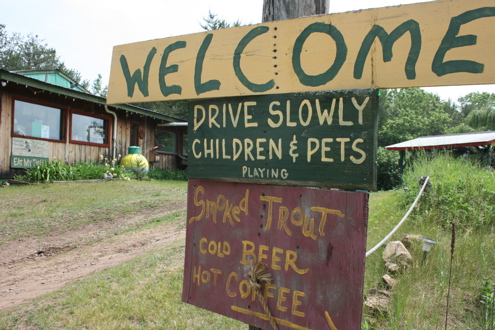 Of course, it would be an old hippie who gives us this fish; as Aldo Leopold once said, referring to Thoreau, “In old hippies is the preservation of the world.” Or maybe that’s not exactly what he said, but that’s what he meant. Herby bought this place, south of Menomonie, Wisconsin in 1978, to start a housing co-op (read: hippie commune) with five other families. He figured it would take $1,000 per month to live out there, so he did all kinds of odd jobs (construction, marriage counseling, etc.), always looking for the next scheme. Herby’s joke: “We were going to raise bullfrogs, but they all croaked.” 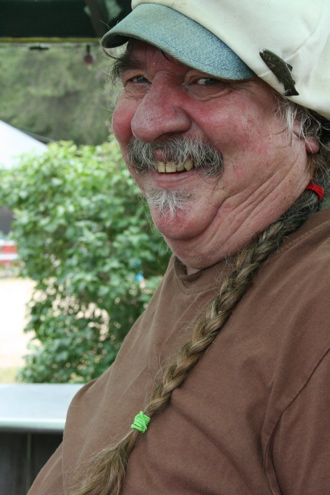 In 1987, a friend showed him a topographical map of the area. Herby noticed that the level of his land was almost the same as that of the rivers nearby. This observation wouldn’t mean much to most people, but Herby had a groovy, far-out inspiration: he figured there might be plentiful fresh water on his land, and he could tap into it, and start a fish farm. Hey, man, why not?  He dug down into the sandy farmland and found what he was looking for. 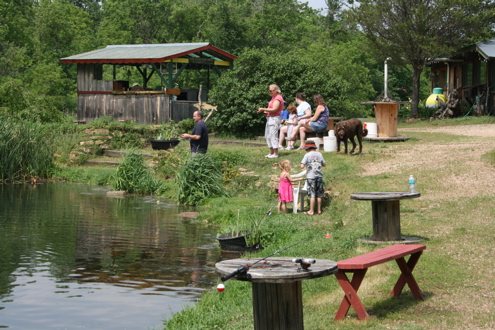 There were a few other things he had to figure out, such as what kind of fish to farm and how to build a bunch of gigantic fish tanks. He decided on rainbow trout, because the water on his land burbles up at 48 degrees, which is ideal for that coldwater breed. 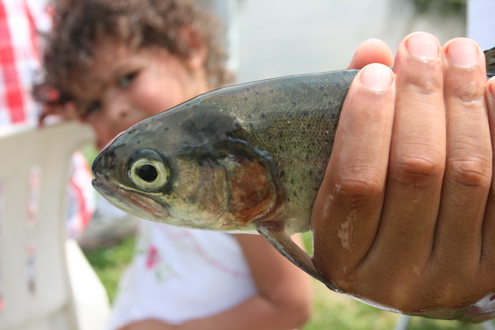 He negotiated with a fish farmer in England about how to build a certain kind of tank, but the Englishman wanted too much money for the plans and diagrams, so Herby just build the tanks based on a tiny photo he had of the English tanks. A few years later, the Englishman came to visit and admitted that he’d stolen the idea in the same way from a Swede. Hippie fish farmers are everywhere! 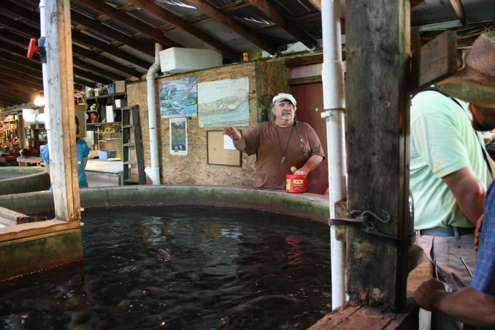 Now Bullfrog Farm has an ingenious system of tanks and ponds, where the water runs through the three fish tanks, through the ponds, and back to the tanks, getting filtered by the sand and wetlands along the way. Environmental assessments by the DNR, the FDA, and the state of Wisconsin have proven the water to be amazingly pure. Herby says it’s a fluke that the fish tastes so good, although it’s a sad sign of the times that fish raised in pure water is a fluke. 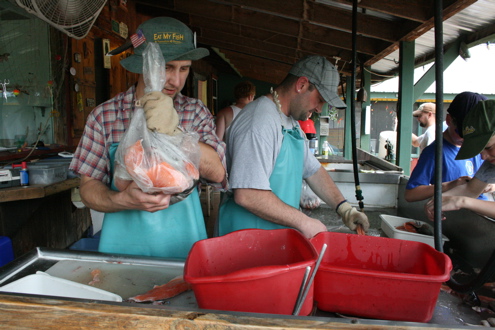 The entire life cycle of the fish prep is on display and watched avidly by the little kids in the crowd. 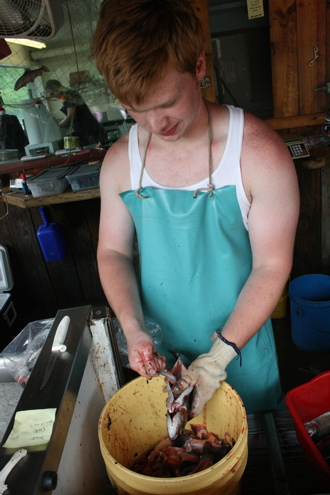 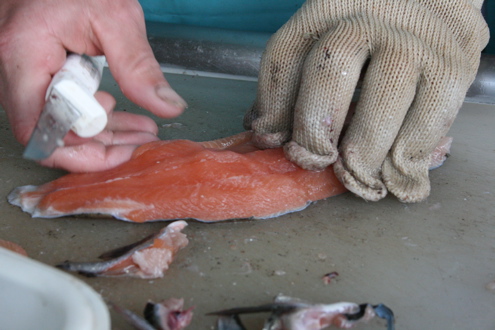 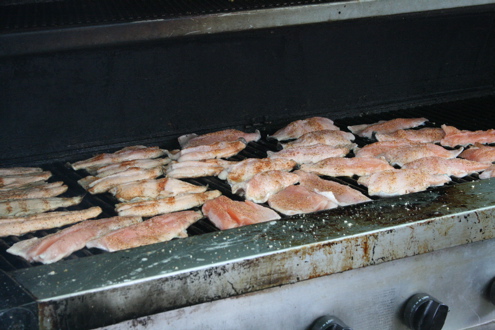 Guess how they recycle the fish guts? 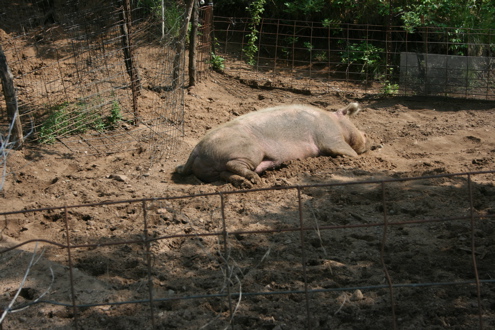 If you wend your way to Bullfrog Farm on a summer weekend (85 miles from the Twin Cities), you might think you’ve veered off track and ended up in a Louisiana roadhouse, or a time warp, or heaven, depending on your experience and proclivities. You can borrow a fishing pole and catch your own trout in the pond, and if you want, they’ll cook it up for you. Or you can go into the Eat My Fish screened-in restaurant, order a plate of rainbow trout from the counter, and rock out to whatever local-area band they’ve brought in. If you’re lucky, you might catch the kick-ass blues team of Howard “Guitar” Luedtke and bassist Deb Klossner. 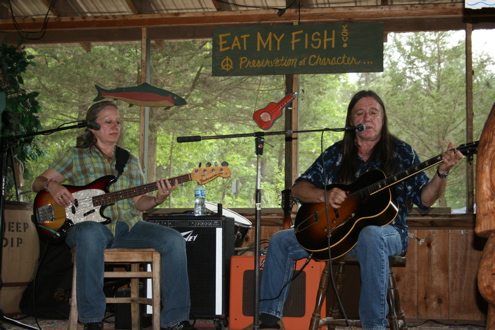 Herby says that rainbow trout is an acquired taste, because it’s richer than many other fish. The trout we had at Eat My Fish was moist, tender, and, oddly, not at all “fishy.” They cook it very simply, running the filets through a little vegetable oil so they don’t stick to the grill, then sprinkling them with lemon juice and their housemade spice mix. The sides are unselfconsciously healthful: slices of fresh apple topped with the spice mix, watermelon, a veggie-studded rice pilaf, and whole grain toast from a local bakery. 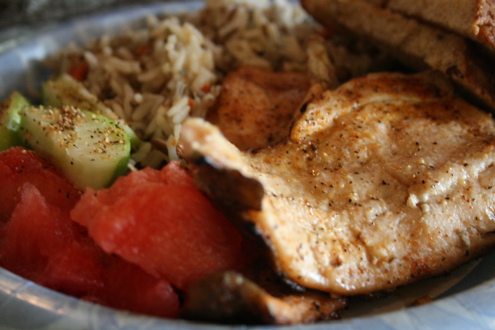 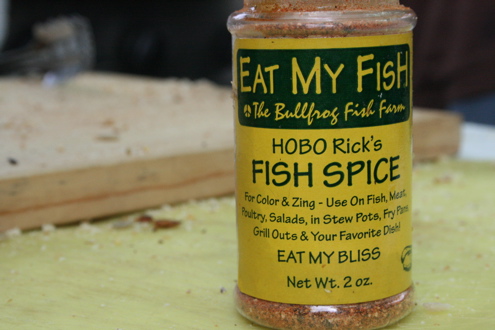 The fish spice is dedicated to Herby’s friend Rick, whose heart problems led to a low-salt diet but who still liked a nicely flavored fish.

Herby is part of a movement to establish a Midwestern seafood brand, unlikely as that may sound. It’s one of his many visions for the future, most of which revolve around sustainability, rural economic vitality, and selling you a share in his farm, or, if you prefer, the whole damn thing. Old hippies never die, of course, but they do fade away eventually, and he wants to be prepared. 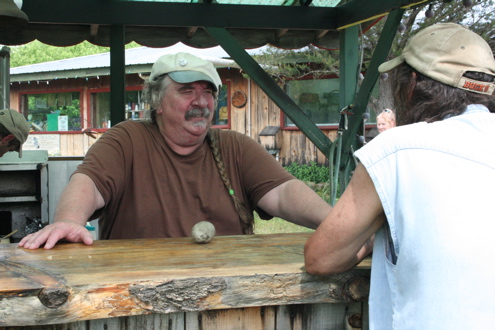 If you can’t get over to Bullfrog Farm this summer, which you should, you can still find Eat My Fish at such fine Twin Cities places as Heartland and the Birchwood. Keep your eye peeled for the divine smoked trout spread at farmers’ markets and gourmet shops.

It’s a nostalgic delight to eat fish that’s so conscientiously reminiscent of a nicer, cleaner past. It seems unlikely that any human will ever again fish in a natural unpolluted waterway of any sort. As Herby says, we’re way past “preservation” by now, and all we can do is “manage” the resources that are left to us.

And we can hope that the hippies of future generations are as wise and industrious as Herby Radmann.