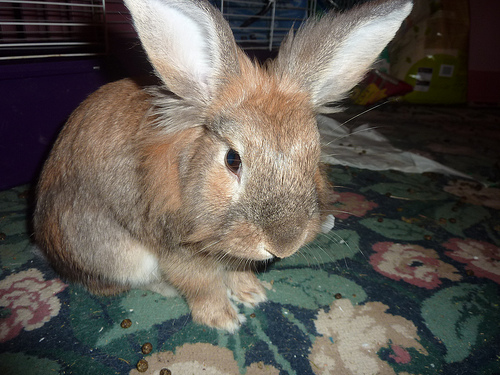 Photo by bunnygoth, some rights reserved under Creative Commons license.

Aside from inspiring many people to dye eggs, the Easter Bunny is also cited as responsible for many ill-fated rabbit adoptions this season. Although the Minnesota Companion Rabbit Society MCRS reports that the number of rabbits surrendered to shelters in MN has gone down lately (approximately 700 in 2012 instead of 1000 in years past), there are still many rabbits lacking good homes due to their failure to live up to certain expectations.

This past year MCRS took in 64 surrendered rabbits from other organizations and adopted out 54. To help prevent folks from adopting rabbits and then finding them to fall short of their expectations, MCRS hosts free Bunny Basics classes for prospective rabbit owners every month at the Animal Humane Society in their Woodbury and Golden Valley locations. MCRS also invites the public to attend Hoppy Hour every other Sunday for rabbit socialization. Rabbits of any origin and their owners can participate in these events. The MCRS website lists upcoming events as well as extensive information on rabbit care.

Chirhart also recommends House Rabbit Society for further information on companion rabbits. “As long as you do your research and can commit to the needs of a rabbit, you’re fine,” concluded Stultz.