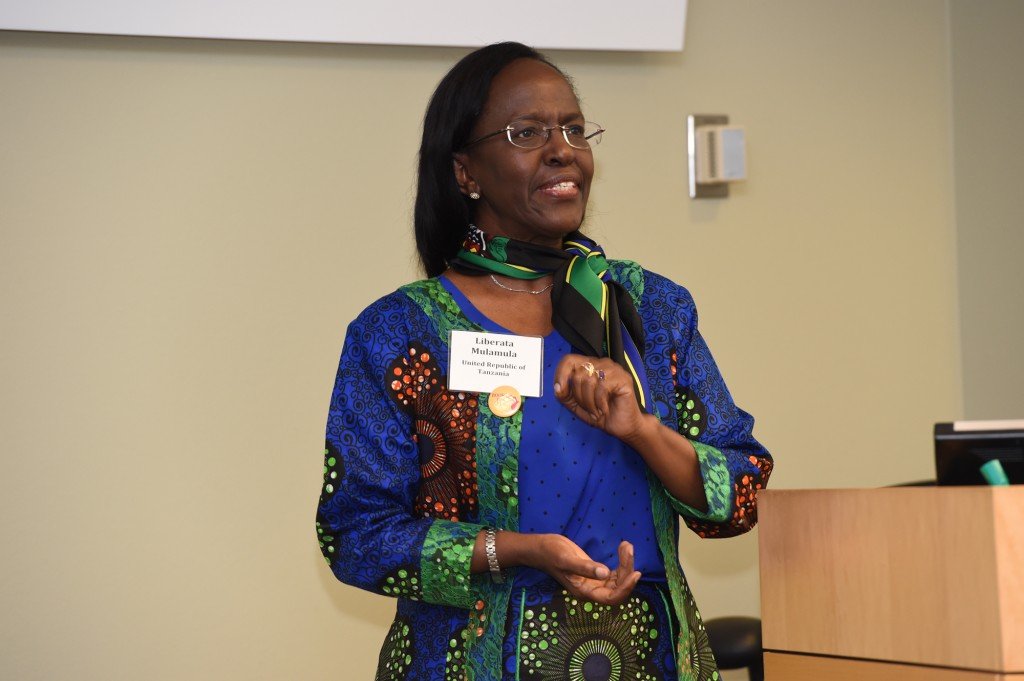 Ambassador Liberata Mulamula of the United Republic of Tanzania speaking at the Eastern Africa Business Forum at Thomson Reuters headquarters in Eagan, Minnesota on May 7 2014. The forum was organized by the State of Minnesota’s Trade Office. (Photo: Courtesy Thomson Reuters)

Tanzania’s U.S. ambassador, Liberata Mulamula, was busy on her May 7 visit to Minnesota. After speaking at the Books for Africa annual fundraiser in St. Paul, she appeared at the Eastern Africa Business Forum at Thomson Reuters headquarters in Eagan. Presentations highlighted investment opportunities in Ethiopia, Uganda and Tanzania in particular.

Taken together, the events exemplified developmental and commercial investment interests in U.S.-Africa relations.

“We are the gateway,” Mulamula said of Tanzania at the forum. “Sometimes when you hear people talk of East Africa they think of only five countries. But we go up to Djibouti and Eritrea. From Tanzania, you can see all of these.”

This African regional forum was the first facilitated through the Minnesota Trade Office, which is dedicated to helping Minnesota companies to export their goods worldwide.

Asratie Teferra, an Ethiopian-American based in Washington DC, opened one forum panel with a look at East Africa’s emergence as an economic power and the longstanding American perceptions he feels must change to increase U.S. investment there.

“In 2000, 14 years ago, [the Economist magazine] referred to Africa as the hopeless continent and in the same magazine in 2011 as the ‘hopeful continent’.” Teferra said, “I would say, next year, they will say, ‘Africa is our life.’”

60 percent of the world’s arable farmland covers Africa. As the global population continues growing, Teferra said, Africa will be have to feed the world. He also cited figures that put seven out of the top ten fastest growing economies in Africa, including Rwanda and Ethiopia, his nation of origin.

Teferra touched on sub-Saharan Africa’s growing middle class, with 128 million households that have $1.4 billion to spend. Because the middle class is growing, they want all the comforts of middle class living, he said. There are opportunities for foreign investment to parallel massive infrastructure projects such as the $4.8 billion millennium dam to be constructed in Ethiopia.

“There is not only a book famine in Africa,” said Teferra, referring to the BFA luncheon earlier that day. There is also an energy famine.”

Those books do represent a substantial investment in development, however. Mulamula called Books for Africa’s mission to end the continent’s “book famine” noble and wonderful.

When Tanzania was newly independent, only 2 percent of school age children could attend class. At that time the country had fallen prey to what the ambassador called the three enemies of Tanzania and of Africa as a whole. Before poverty and disease, “the third and the biggest enemy of the people in Tanzania was ignorance,” Mulamula said.

Thomson Reuters eventually partnered with BFA through the Jack Mason law and Democracy Initiative and shipped entire law libraries to the continent, some of which went to Tanzania. Those donations fit with the Thomson Reuters mission to help the legal system work better every day, said Tom Pfeifer, the company’s head of global sales and customer experience.

“To be able to sit there and do those things,” said Pfeifer at the forum. “To establish and grow business and to establish relationships that will have a long lasting impact, without the rule of law, that is not possible.”

“These projects wouldn’t be successful if we didn’t have a great relationship with the government of Tanzania, who’s providing a strong regulatory environment,” Buck said.

Minnesota based Ugandan-American, Fred Nabeta, who presented on Uganda, talked about the cultural shift in public-private partnership. The nation’s image, he said was, tarnished by Idi Amin’s role but the past 28 years of stability led to that shift.

“We had this old culture where, when foreign investors used to come in, they came in and they did everything on their own terms, Until Uganda said, no,” said Nabeta, an IT consultant who chaired Uganda’s North American Convention. “Why bring cement when we have cement here? Why bring timber when we sell timber? Why employee people from there when we have labor in our country?”

Nabeta also outlined a Uganda’s range of investment incentives and also touted agro-business, tourism and mining as some of the nation’s priority sectors.

In her closing statements at the forum, Mulamula said she was glad simply to be discussing the future of business in Africa rather than the strife rampant in so many countries.

“I am here to pay tribute to all those that have contributed a cent, a dollar,” Mulamula said at the fundraiser. “A dollar for Africa means transforming the life of a child.”