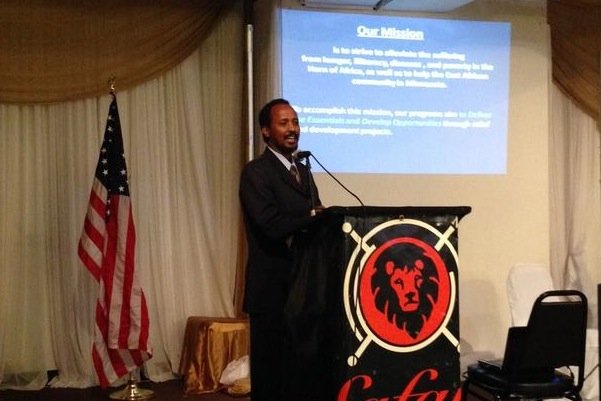 Mohamed Idris, executive director of the American Relief Agency for the Horn of Africa, speaking on climate change.

Solar-powered lanterns and cookstoves are among the practical approaches to expanding access to energy and decreasing reliance on fossil fuels in East Africa. They were among the topics in a discussion hosted by Stephanie Hemphill at the Safari Restaurant in Minneapolis on October 2. The meeting was sponsored by several social and environmental justice groups including the Sierra Club, the American Relief Agency for the Horn of Africa (ARAHA), Somali Family Services, and Oxfam.

One of the panelists was Mohamed Idris, the executive director of ARAHA.  Idris began by explaining how climate change will affect food insecurity in the future.  Climate change will cause more severe weather patterns, including increasingly common draughts and floods, which will lead to more crop failure and increased famine.

Idris’s solution focused on expanding access to energy in Eastern Africa and switching that type of energy from traditional fossil fuels to sustainable alternatives, especially solar.  Many families in Eastern Africa do not have access to affordable energy at all, and Idris’s organization, ARAHA, is working to change that.

ARAHA is working on a pilot project that will provide solar powered lanterns to 100 families in the Shagarab Refugee Camp in Sudan so that they can have light after sundown.  ARAHA is also providing solar stoves to a pilot group of 200 families.  Idris was able to cook rice in the solar stove himself, and says, “To see the steam coming out of the pot, without gas or anything attached to the stove, that was amazing.”  Idris says that adaption to the new technology has been low, but as it becomes more affordable he hopes that people will see the difference solar technology can make in their lives.

The other panelist was Paul Porter, a professor of agronomy and plant genetics at the University of Minnesota-Twin Cities.  Porter reinforced the idea that while climate change will amplify the effects of poverty and hunger in the future, it is not the cause of them.  He noted that challenges like political instability, land ownership laws, and market access had been feeding poverty in Eastern Africa before climate change was studied.

Porter explained that much of Somalia and Eastern Africa is communal land that is not owned by anyone.  This is rapidly changing, and the increase in private land is making it difficult for many farmers (especially those who raise livestock) to continue their traditional practices.  International efforts can also harm farmers, even when they are well intended.  Food aid from other countries, for instance, decreases the demand for domestically produced food.  Porter noted that one way to reverse this is to purchase food from local farmers with the money that would be spent shipping food aid, thus helping the economy at the same time.

Porter reminded the crowd that while farmers feel the effects of climate change, they cannot really influence it.  “As you think about these issues, be [the farmers’] voice…because they can’t really speak,” Porter urged.  This sentiment was echoed in a statement from Congressman Ellison, read by his representative Jamie Long.  Ellison noted that while the United States is the world’s largest emitter of carbon emissions, the effects of climate change are felt disproportionately by people in other countries.

The night ended with discussion at each of the tables about what individuals could do to decrease the effects of climate change, from reducing energy consumption to changing their eating habits.  Jessica Tritsch, from the Sierra Club, led the discussions and reminded everybody of how our individual actions affect communities across the world.