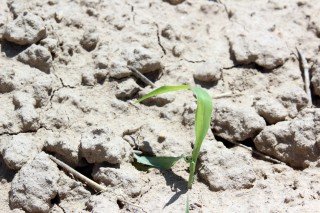 This entry is part of IATP’s Story of Drought, examining the impacts, causes and perception of drought in the U.S. and around the world.

Lamar, Colo. – In a good year, the wheat on the Hixsons’ farm should stand waist high by mid-summer. This year, though, much of the crop isn’t even tall enough for the combine to harvest.

Jillane Hixson hasn’t seen regular rainfall since 2002. She and her two brothers, Ron and Eric, farm 3,000 acres of wheat here in southeast Colorado, the same land that their father farmed before them. After 12 years of drought, “The ground is just like brown flour,” Hixson says. When the wind picks up, what was once soil coats her car, her windows, and even her counter tops.

“Every morning when you get up, the first thing you do is vacuum down the kitchen table and wipe down the coffee pot just to be able to make a cup of coffee,” Hixson says. “You can’t escape it.”

With regular rain, the Hixsons harvest around 40 bushels of wheat an acre. This June, much of their land yielded merely four bushels an acre, or one-tenth that. The Hixsons’ crop insurance covers just enough for them to buy seed and fertilizer and try again, but it doesn’t pay anything near what a full harvest does.

All throughout eastern Colorado and western Kansas, farmers and ranchers are waiting for rain. “We’re in the midst of a prolonged drought,” says Duke Phillips, a Colorado rancher who manages cattle on about 200,000 acres. “Everybody is operating at deficiencies and praying for more.”

The extreme weather brings with it differing strategies for pulling through, from the day-to-day to the long-term. On Phillips’s ranches, drought means planning. Part of that planning happens years in advance, as Phillips installs infrastructure that allows him to rest as much of his pasture as possible at any given time. Part of it happens as he watches the sky, and uses preset benchmarks to determine how many cows he’ll ship to slaughter if he doesn’t get a certain amount of rain by June, by July, by August.

Other farmers and ranchers have their own techniques, from planting cover crops to simply planting earlier. “People are planting a month earlier than they used to be,” says Donn Teske, president of the Kansas Farmers Union and vice president of the National Farmers Union. “There’s more likely moisture to make a crop before the heat of summer.”

There are, too, efforts to make the most of the water the land does get. Mike Callicrate, who runs a business out of Colorado Springs, Colo. and ranches in St. Francis, Kan., is designing a permaculture program for portions of his land, and in believes in capturing as much water as possible using terracing, catchments, ponds, and similar techniques. “I’d like to find ways to make sure that no water leaves a farm,” Callicrate says.

While the farmers search for ways to keep going until it rains, elsewhere, others are focused on broader solutions to the question of water. Take New Belgium Brewing, the major craft brewery based out of Fort Collins, Colo. Water is the primary ingredient in beer, and in 2007, sustainability-minded New Belgium began formally tracking how much of it they use.

Since then, New Belgium has installed sub-meters to monitor where it’s losing water and beer. It’s added features to its bottling line that have saved more than two million gallons of water per year. It’s a member of a state greywater pilot project. All told, even after a few years increasing production and making more water-intensive hoppy beers, New Belgium is on track this year to use less water than it did back in 2007.

For those who take the long view, there are bigger ideas to achieve resilience in the face of extreme weather. At The Land Institute, based in Salina, Kan., the ideal system of agriculture resembles the prairie, a perennial polyculture that supplies its own fertility. Perennial plants are around in the winter to absorb moisture from snow, and in the dry heat of summer, have years-old taproots to plunge into the ground’s deep reserves of moisture.

One of the plants in The Land Institute’s test plots is a distant relative of the sunflower, a perennial called silphium integrifolium. The Land Institute first heard about silphium a few years back, when a Texas-based scientist let them know that, in the middle of a withering southern drought, this plant still seemed to be thriving. Not long after The Land Institute began to work with silphium, they went through a serious drought themselves.

“All the rest of our crops were struggling, but the silphium integrifolium hardly batted an eye,” explains Josh Svaty, vice president at The Land Institute. “It was a demonstration to us that you can find some plants that manage drought differently than others.”

The Land Institute still has a lot of questions about silphium, ranging from whether it’s a good idea for a perennial crop to “keep going 60 miles an hour in 100 degree weather,” as Svaty puts it, to just what makes it so resilient, to whether they’ll be able to breed it to be a viable oil seed crop. What they do know, though, is that it’s a plant with possibilities.

Back in Lamar, Colo., for now, the Hixsons and farmers like them are doing what they can. The Hixsons have switched from tilling to spraying for weed control, in order to disrupt the ground as little as possible. To avoid more of their soil blowing away, they’ve paid for a nearby feedlot to come and spray their fields with manure. They’re talking to their state legislators about policy fixes that would help them get through the short term, like a waiver on expensive state vehicle registrations for farm equipment that’s sitting idle.

All the while, they’re doing what farmers have always done: hoping.

“I just try to keep my faith,” says Ron Hixson, as he rides the combine over his fields. “Hopefully we’ll have a good crop this time next year.”

At top: Struck by drought, the wheat fields at the Hixsons’ farm are sparse and stunted.