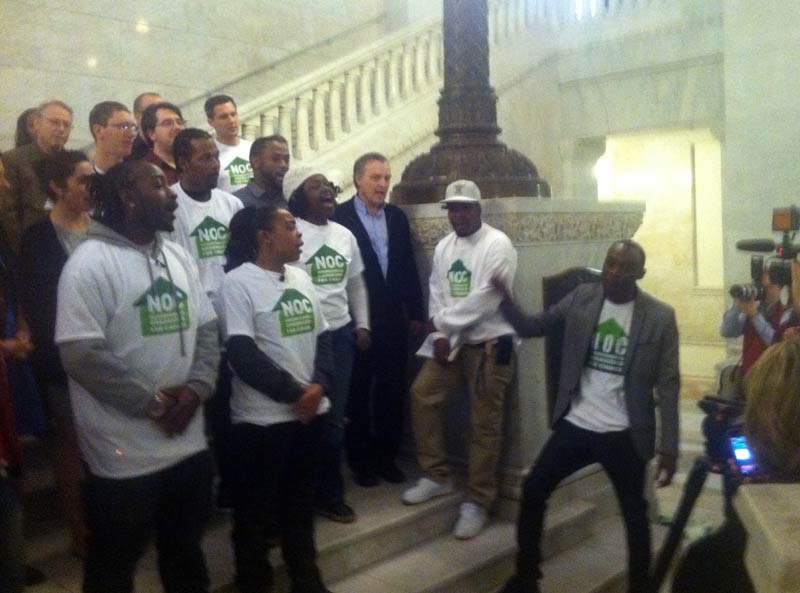 Mike Griffin of Neighborhoods Organizing for Change (NOC) leading a chat of "black lives matter" on the steps of City Hall during last week's "People's State of the City" rally.  Photo by Bill Lindeke.

These days it’s hard to tell whether Minneapolis is united about being divided. Last week, two contrasting “state of the city” events — Mayor Betsy Hodges official speech at the American Swedish Institute, and a rally the next morning organized a North-side grassroots group — illustrated the ongoing tension between the rhetoric and reality of racial inequality in Minneapolis.

Hodges’ speech, an annual tradition for mayors across the country, emphasized the themes that led her to an easy victory in the 2013 election. As Gino Terrell wrote on the Daily Planet earlier this week, Hodges stressed education, income inequality, and climate change, as part of her plans for the upcoming year.

But the well-received speech comes only months after Hodges’ efforts to devote city resources to addressing inequality became surprisingly contentious. During budget debates at City Hall, Hodges’ plans to address racial inequality sparked a small controversy, particularly in parts of the city that are struggling the most with foreclosures and racial inequality. While debating the budget, Council Members Yang and Warsame and other Council Members  voted to defund part of Mayor Hodges’ key proposals in favor of more “meat and potatoes” issues that impact neighborhoods like Jordan or Cedar-Riverside, home to many  of the highest proportions of people of color in the city. The debate pointed to some disagreement throughout the city over how best to redress long-standing geographic and racial inequalities at the city level. 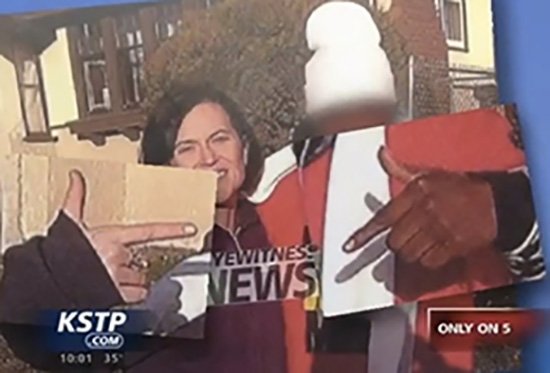 [Mayor Hodges and Nevell Gordon, a NOC staff member, in a notorious picture from a KSTP report dubbed “pointergate.”]

Friday’s rally, led by the Northside grassroots group “Neighborhoods Organizing for Change” (NOC) and Ward 2 City Council member Cam Gordon (the city’s only Green Party Council Member) revealed some issues that continue to create division at City Hall. The rally called for an end to the city’s “spitting” and lurking ordinances, which have been on the books for ten years.

“When you have arrest like ‘lurking’ on your record, it makes it harder for you to get housing, a job, or succeed in life,” Cam Gordon said, while NOC members gathered together behind him in front of the “father of waters” statue on the steps of City Hall. “This is not what we want in Minneapolis. We want to make it easier for people to succeed, and we don’t want people to be paying consequences for victimless crimes of thought or intent.”

While the city’s spitting ordinance has been around for over a century dating back to days of spittoons and tobacco, the lurking ordnance is a more recent creation. In the city code, the ordinance reads:

385. 50 Lurking. No person, in any public or private place, shall lurk, lie in wait or be concealed with intent to commit any crime or unlawful act.

As the Star Tribune reporterd last week, over the last few years, enforcement of the ordinances has been radically disproportionate: almost 60% of the people arrested for lurking were black.

In Minneapolis, the lurking and spitting ordinances are the most visible part of what has come to be known nationwide as “quality of life” policing. According to the theory, violent crimes like assault or murder are reduced by focusing on smaller infractions like graffiti, pan handling, or trespassing. Much like the “stop and frisk” policies in big cities like New York and Chicago, which allow police to stop anyone they deem suspicious, the two Minneapolis ordinances rely on subjective judgments about the intent of possible suspects. In practice, these rules have proven to be vehicles for the controversial practice of racial profiling.

“The spitting ordinance is a great example,” Wintana Melekin, an organizer for NOC, told me after the rally.  “Navel Gordon was in front of NOC headquarters, after he’s worked there for two years. A cop stopped him for spitting, and said ‘hey you were spitting; we’re going to search you.’ It was really embarrassing for Navell because we were having a NOC board meeting.”

According to Melekin, police claimed that Gordon had been acting suspiciously; after NOC board members began interrogating the offers, place backed down.

“We see this every single day,” Melekin told me. “The majority of searches don’t result in something. The fact that they [innocent people under suspicion] get embarrassed, degrading people simply for the opportunity of finding a crime, is unethical. We want to see these ordinances removed, and to begin to treat people fairly.”

Navell Gordon, who became famous across the country for being the key figure in pointer gate,” where leaders of the police union accused Mayor Hodges of “flashing gang signs,” was at the front and center of last Friday’s NOC rally inside City Hall.  Wearing a spotless white ball cap, Navell Gordon joined Councilmember Cam Gordon on the steps, as an  example of the stakes of the city ordinances for the city’s most disenfranchised demographic. 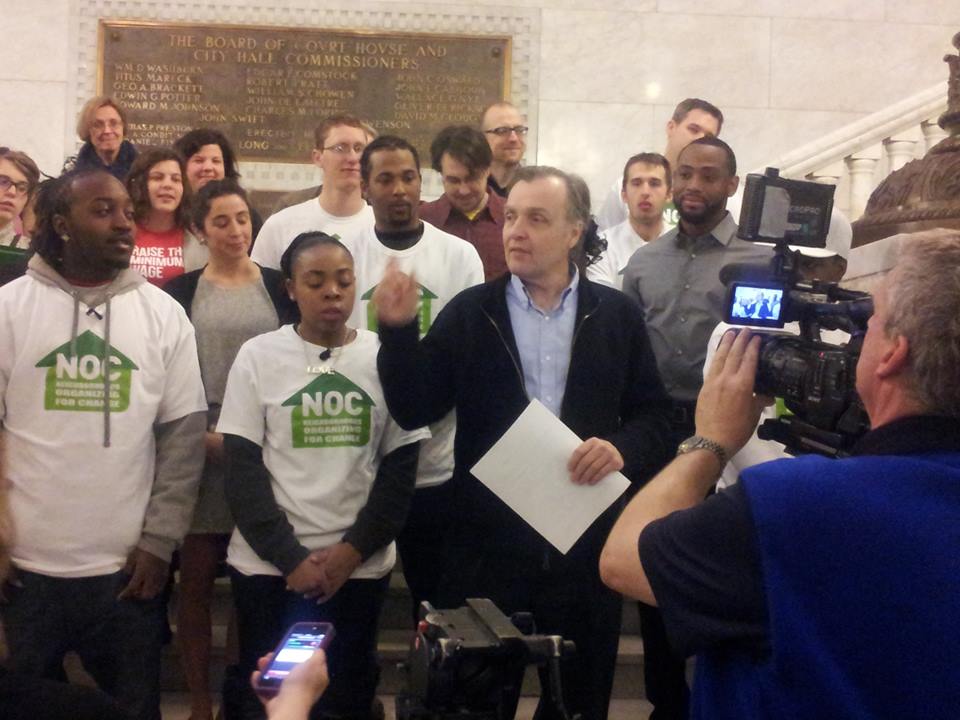 The high point of the rally came when Council Member Cam Gordon started to invoke the memory or Reverent Martin Luther King Jr, pointing out that it was the anniversary of his last speech before being assassinated in 1968.

As he spoke, the NOC demonstrators nodded intently in agreement, before chanting “black lives matter!” in front of the assembled media cameras.

After the rally was over, Cam Gordon’s effort to erase the controversial lurking and spitting ordinances from the books was formally introduced during the City Council meeting. Over the next few weeks, a public hearing and subsequent City Council decision will reveal how seriously city officials take Northside neighbors’ claims to being harassed by the city police department.

[Council Member Cam Gordon addressing the crowd at the ‘state of the city’ alternate event while members of Minneapolis NOC watched on.]