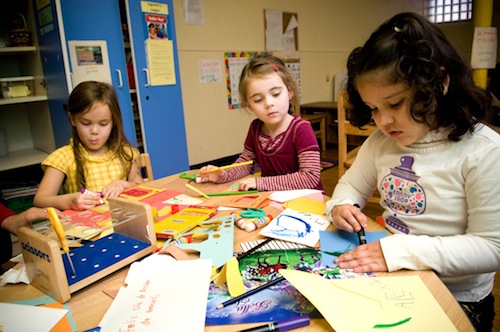 As more and more evidence piles up about the importance of kids getting a head start to their education before kindergarten, the spotlight is on what preschool programs can offer students. Joyce Dual Immersion Preschool offers not only the basics kids need to enter kindergarten, but an added focus on language, with a program aimed at supporting both Spanish-speaking and English-speaking children. Joyce has national certification and a four-star rating from Parent Aware.

The school was founded in 1966 by a woman named Ruth Helen Marks, from Joyce United Methodist Church. She wanted a program to serve the many children living in the neighborhood who couldn’t afford preschool. In 1994, in response to the growing Latino population in the community, head teacher Sharon Dill changed the program’s structure into a dual immersion approach, with the curriculum taught in both Spanish and English to students from both Spanish-speaking and English-speaking backgrounds.

Last year, the preschool expanded to having a pilot program at Windom Dual Immersion Elementary, a collaboration which took about six years of conversation and “a desire to work together,” Executive Director Sarah Clyne said. The programs are structured a little bit differently, with classes at different times of day, and Windom has a multi-age classroom instead of separating out first and second year students.

Of the 18 students in last year’s Joyce pilot at Windom, about half came to Windom for kindergarten, said Lucilla Yira, Windom’s principal.  She said the pilot went better than she anticipated. “I thought maybe there would be a glitch,” she said, “but it was seamless.”

Besides the regular curriculum, Joyce also invited parents from Windom to community events at the preschool. One event drew 150 parents, she said, involving arts and crafts and other programming.

Although not all students end up going to Windom for kindergarten- some go to Emerson or other schools throughout the city, “We’re committed to advocating for parents to make sound choices for their children,” said Clyne. While some children do well in a dual immersion setting, it’s not for everyone.

Like Joyce, Windom has a dual immersion approach. Other Minneapolis public schools such as Green Central, Anderson and Jefferson elementary schools, use Developmental Dual Language, a program aimed at mainly Spanish-speaking students.

The drawback of the DDL model, Clyne said, is that Spanish-speaking students aren’t as exposed to native English speakers, as they are in a dual immersion setting, where students are drawn from both of those populations. With the DDL model, she said, “You need to be careful you aren’t segregating children based on race. Models need to be taken with great care.”

Yira also said she has some issues with the DDL approach, especially the way it was done at Green Central, where it was implemented with so many classrooms through grade four in its first year, rather than starting with kindergarten and gradually building the program.

Unlike the DDL model, the Dual Immersion approach starts out with curriculum that is 90 percent in Spanish, with content and language learning done in parallel. Then the amount of time spent learning in Spanish is gradually reduced each year.

Some students who have trouble with the academic language skills might need special services or interventions to target one academic area, Yira said, either as indivduals or in small groups.

At Joyce, Clyne said, parents are drawn to the diversity, which the school strives to embrace.

Cathy Haugland chose Joyce specifically for her children because of its dual immersion model. Both she and her husband are English speakers, and have learned some Spanish, with her husband being self taught and Haugland having some Spanish in high school and college. In addition, the family has friends in Spain, and the two families have visited each other.

Haugland said Joyce made a point to include the families from the different populations in its community events. Through those different fiestas and events, the Hauglands were able to make connections with other families. They have become close to one bilingual family.

Their friend Luis Cuyun, originally from Guatemala, chose Joyce because he and his wife, who is from South Minneapolis, felt it was important to keep their children connected to the Spanish language and Latin American culture.

Cuyun said that the cultural and language component was always present for his kids, as they were living in a bilingual household, but he felt fortunate to have it part of their education as well.

He also was happy about becoming a part of the community around the school, as their family became friends with the Hauglands. “It was a community, it was good to meet all sorts of people that had different reasons to go to the preschool,” he said. While some children came from affluent families, others were supported by scholarships, and all of it was wrapped by an umbrella of being multicultural. “It was a very postive experience,” he said.

Cuyun joined the board at Joyce, and attended meetings with Padres de Familia, a program aimed at the Latin American families of the school. As a new Minnesotan, he found the meetings provided useful insights on topics that might seem like a given for people who have lived here all their lives.

After Joyce, Cuyun’s children first went to Emerson, which also has a Dual Immersion model, but it differed from Joyce in that it served primarily Latin American families, he said. After four years, they moved their children to Field school, which is closer to where they live and had a stronger reading and writing program.

Erika Boelk, another Latino parent, chose Joyce not for the Spanish language, but so that her kids could identify with other children who are bilingual.

CORRECTION 1/7/2014: The article originally stated that Ruth Marks founded the Joyce Food Shelf. We heard from Steve Marks, with this correction:

When Ruth started the preschool, the minister of Joyce UMC where the preschool was, happened to be her husband, Douglas K. Marks.  Rev. Marks was the one who started the food shelf.  I was there and on the ‘ground floor’ as they are my parents.

Thanks for the information, Steve!