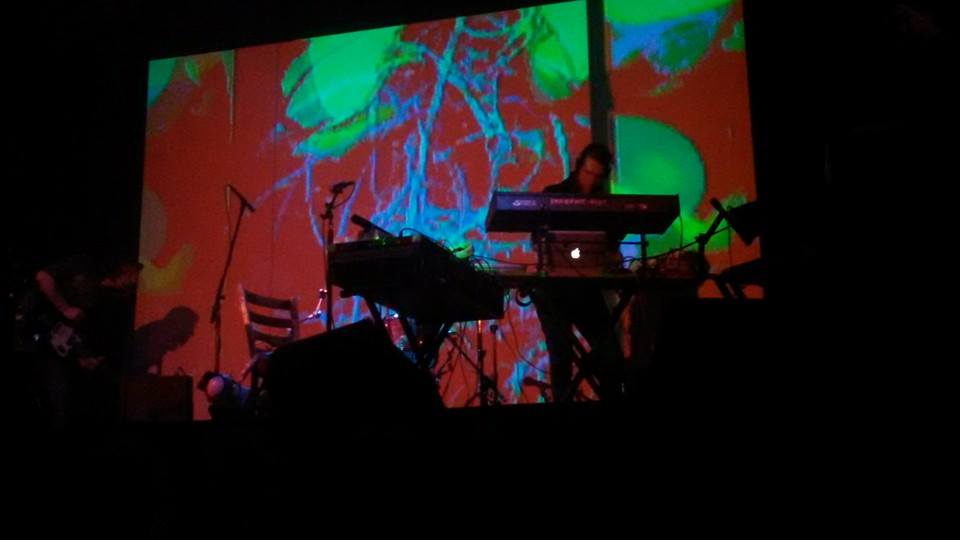 Over the weekend the Cedar Cultural Center gave itself over to 28 hours of drone for the annual Drone not Drones concert. The event is a fundraiser for Doctors without Border and according to the website they raised thousands of dollars. Thanks to KFAI there was a livesteamof the event – for whose who’d rather cozy up in the comfort of their own home. The archive is available on Bandcampwith proceeds going to Doctors without Borders.

I was not able to give myself over for 28 hours (you know, having kids that require managing and all) but I was there for longer than originally intended. At times there may have been a couple hundred of people in the room and in the wee hours of the month that slipped to a dozen or two. I’m counting people who were awake and asleep. I heard from several veteran attendees that falling asleep to the drone is part of the experience because you really drift in and out. It’s a remarkably collegial atmosphere – it almost feels like a high school lock-in if they allowed beer at a high school lock-in.

The event is more than a concert, it’s an experience. The lights are turned off, the psychedelic videos project on the wall, people bring sleeping bags for a long haul of drone. Each band performs for 30 minutes – more or less. There is a constant drone going throughout – like perpetual adoration in a church. The drone changes shape and sound every half hour but its presence is a constant. The bands transition seamlessly. There’s a gentle hand off – not like passing the baton in a race but like handing off a fragile object.

There were some acts you would expect – if you follow experimental music. The night started with International Novelty Gamelan ensemble playing a series of unique Javanese instruments that are as beautiful to look at as listen to. They include percussion like drums and xylophones and interesting shapes played with bows with an old world flavor and the drone sounded like a clock tick tockingthrough much of the set. That transitioned to the lone guitar of Jesse Peterson and a rocking rendition of the drone – whether he was playing the guitar conventionally or with a tiny bow. The next transition left the drone in the hands of Food Pyramid, who ampedup the synthesizers to bring a 60’s vibe to the room. It was a stage full of keyboards around a guitar and a drum.

Then the drone was handed off to bands that might be better recognized around town for other strains of music and the sound did take on the shape more conventional music – but only when seen through the bell-shaped curve. The bands were still experimental and droning – in a new way.

BNLXintroduced recorded vocals, which was the first vocals addition of the night. Drone Man Winter was a permutation of Dead Man Winter. Not at all the same set they played a week ago for the The Current birthday party at First Avenue but a treat for someone like me who like both country and noise. The number of people on the stage, the bass, the violins. Really the violin played with ferocious passion.

Follow that up with Mike Lewis, Jeremy Ylvisaker, Dosh and it’s really a showcase of some of the best musicians in town doing something completely different, which is difficult to say about a group of musicians who play such a wide range of genres around town before drone. Each took the drone in a slightly different direction. It’s little wonder how you can find yourself suddenly there waytoo late.

The last band I saw was Transitional Species, who brings a percussion dark ambience to the drone. It’s fun to see the range of non-traditional and certainly unconventional instruments on stage. This was the wee hours of the morning. The music was soothing and everyone relaxed – some again to the point of sleep but still united in the experience of engaging in a sound.

Looking at the lineup there are several bands I would have liked to see – Paul Metzger, P.O.S., Brokebackand I saw Claire de Lune backstage. It would have been interesting to hear what a woman’s voice could do with the drone. Last year I know Prairie Fine Women’s Choir rocked it.

Next year maybe I’ll have to drop kids off to grandma’s and bring a sleeping bag myself.