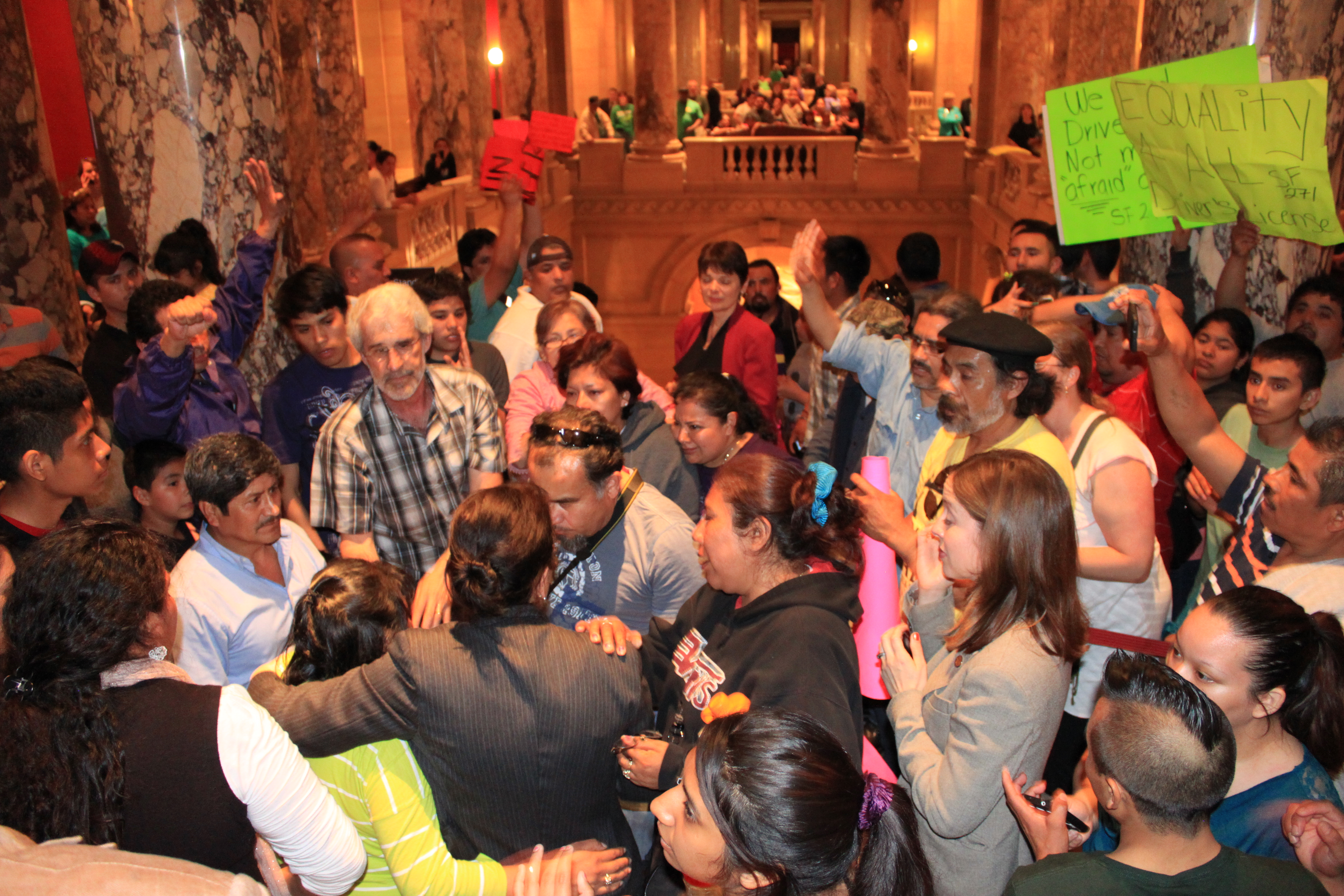 A crowd of supporters hug state senators who voted yes on SF271 only moments before.

The Minnesota State Capitol filled with loud cheers and chants of “Sí, se pudo,” (“Yes we could”) Saturday night, after the Senate passed a bill that would allow undocumented immigrants to obtain driver’s licenses. The next step: the bill would need to pass the full House of Representatives before the May 20 adjournment to have a chance of becoming law.  Governor Dayton has promised he will meet with the bill’s supporters if it is passed by the legislature.

More than 150 supporters showed up at the Captiol to hear the Senate vote on a bill that the Latino community has been lobbying for in various incarnations for at least five years. At the beginning of the week, organizers felt the bill was in danger of getting brushed aside, and a handful of supporters began a hunger strike to bring attention to their cause. Last night several of the hunger strikers pledged not to eat until the bill is signed into law.

Session Daily reported earlier that the drivers license legislation “would modify eligibility requirements for a driver’s license to allow applicants to use identification cards issued by another country as proof of identity; remove citizenship requirements; and eliminate immigration status check dates on the card for applicants with short-term visas.”

Here are some videos from the evening.

The Minnesota State Capitol filled with loud cheers after the Senate passed SF271 by 36-28 votes.

State senators who voted yes on the “Drivers Licenses for All” bill hugged organizers and supporters of the bill.

Monica Vega, an organizer with the MN Agenda Latina, describes the mood in the MN Capitol after the vote.

You can make your own rosette irons (to make rosette cookies) at the Chicago Ave. Fire Arts Center

Monica Vega (right) and others watched as the members of Senate voted.

The group gathers outside the Senate chamber.

Javier Reyes has been documenting the organizing efforts over the last months.

A mother takes her sleeping baby and heads home after the vote.

A family expresses their support in the rotunda of the capitol.