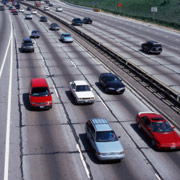 With their sprawling geography and spotty transit service, suburbs are a lousy place to be poor. But that hasn’t stopped people struggling to reach the poverty line from moving there. In the Twin Cities, more than half the poor now live in suburbs.

The suburbanization of poverty, to use a Brookings Institution coinage, is a nationwide trend, driven partly by the rising cost of living in walkable, transit-rich city neighborhoods. But what’s saved in housing can be eaten up by the high costs of owning, maintaining and operating a motor vehicle in places where you have to drive everywhere.

“With gas now approaching or exceeding $4 a gallon, a full day’s work at minimum wage sometimes won’t pay for a single tank of gas,” wrote David Moser in a new citytank post. “The burdens of sprawl weigh heaviest on the poor.”

Minneapolis and St. Paul still have the highest levels of poverty in the metro area, each at 24 percent following sharp increases in the past decade. But only about one-fifth of Twin Citians live in the core cities, which means lower rates among the other four-fifths of the population translate into greater numbers of poor people.

Many of thm live in modest close-in suburbs such as Brooklyn Park and Maplewood that are rated less than half as walkable as the center cities by Walk Score. Further out in the ‘burbs, Walk Scores dip another 50 percent in edge cities such as Ramsey and Lino Lakes (the area’s worst at 14 out of 100, compared wth Minnesota-best Minneapolis at 69). But Census data show little poverty in those distant places.

Post-World War II suburban planning gets much of the blame for high transportation costs in an analysis by Todd Litman of the Victoria Transport Policy Institute in British Columbia.

“Conventional transport planning generally ignores affordability as an objective [and] favors faster but more costly transport modes, such as automobile travel over slower but more affordable modes such as walking, cycling and public transit,” he wrote. “This tends to create automobile-dependent transport systems, which increase total costs.”

Those costs are borne by both the public and individuals, especially poorer ones.

“The portion of household budgets devoted to transporation tends to be significantly higher in automobile-dependent, sprawled locations than in more compact, multimodal locations,” Litman added. “Lower-income households are particularly likely to save money by locating in more accessible, multimodal communities.”

Sprawled suburbs are widespread in the United States, pushing average transportation costs to nearly 20 percent of household budgets. Gasoline alone eats up 4 percent of Americans’ pretax income. Despite sky-high fuel taxes, western Europe spends just 10 to 15 percent of income on transporation, largely because folks there drive only about half as much as Americans.

Savings like that are the equivalent of higher incomes, especially for the poor. Of course, we know that wealth doesn’t necessarily produce happiness. But Minneapolis-based National Geographic fellow Dan Buettner, after a five-year global study of happiness, has found that our transportation choices can be a significant indicator.

The No. 2 annoyance for Americans (after housework) is the wordaday commute, he reported. “If you can cut an hourlong commute each way out of your life, it’s the [happiness] equivalent of making an extra $40,000 a year if you’re at the $50,000-$60,000 level,” he wrote. “It’s an easy way to for us to get happier. Move closer to your place of work.”

This can work for rich and poor alike. But for the poor, it can make the difference between abject poverty and a step up the ladder of financial soundness.