This last week a coworker had some questions for me.  She’d been to a Somali wedding and saw several of the women there dressed in much more revealing clothes than she’d ever seen Somali women wearing.  She wanted me to shed some light on this.

This is what I personally witnessed last Saturday when I was invited to a relative’s wedding by my cousins.  The scene has changed since the last time I went to a Somali wedding. So, it’s been a while since my last wedding but since then fashion dialed up a notch.

Let me set the scene for you:

After my shift as a Caribou barista was finished, I went over to my cousin’s house. She had me hurry up and get ready because the wedding was from 9 p.m. to 1 a.m. Normal Somali weddings in the Twin Cities seem to start at midnight and last until 4 or 5 a.m. I don’t know why that is, but that has been the norm for all the Somali weddings I’ve been to in America.

That’s not the way it was in Somalia. There, the guy’s family came to the girl’s family after everything was finalized. The girl’s family cooked food early in the morning until noon when people ate the food, followed by the ceremony of marrying the couple. Then in the afternoon around 3 or 4 p.m., the dancing and the celebration happened and by 9 p.m. the couple was in their home and everyone either hung around to chat or went home.

So starting weddings late at night is a new phenomenon that started to become a tradition outside of Somalia.  The cooking of the food still happens in some families, and the ceremonies still take place in the afternoon, but now there is late night dancing and fancy, out-of-this-world clothes, which are new. Most wedding celebrations, like the one I describe here, are women only. Most women get ready in their homes, get in their cars, and come to the hall where the wedding is happening. It is like they never left their private home. Some of the younger women had beautiful henna designs on their hands, make-up on their faces, and their hair showing, while others had their hair covered. 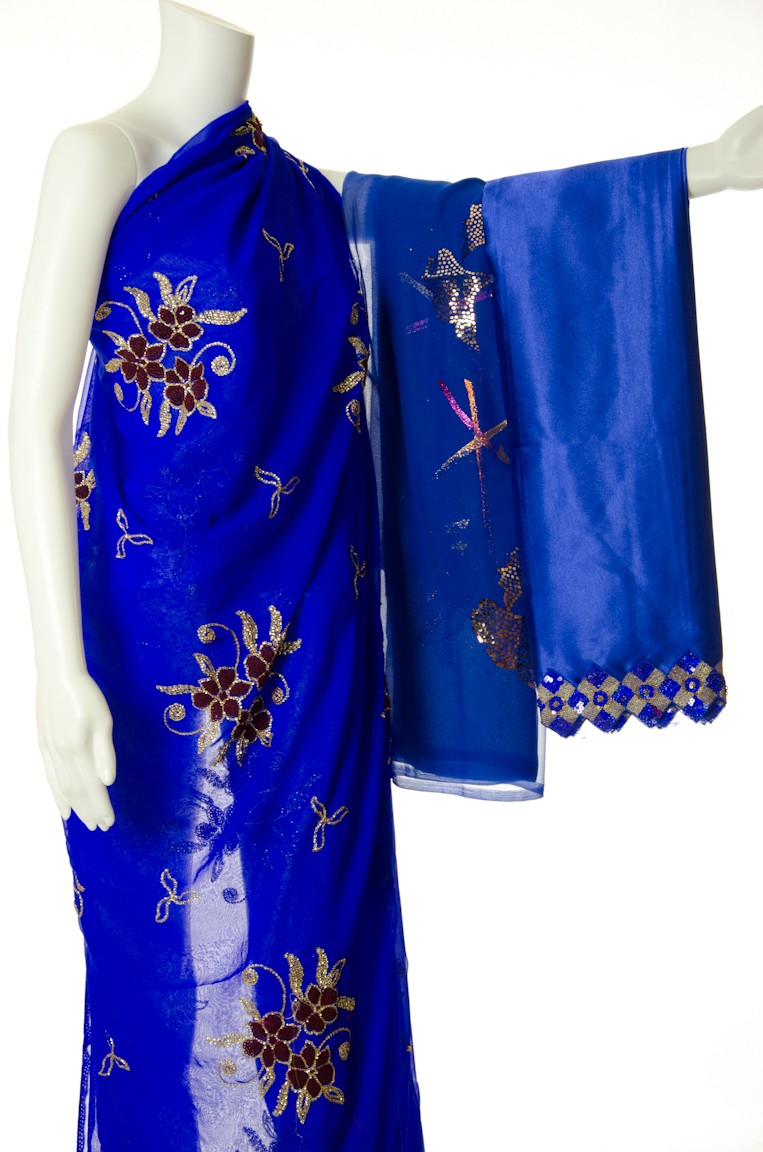 So, going back to the scene — after my cousin and I ran around picking up other cousins and finding lovely things to wear, we got there around 10:30 p.m. When I walked into the room, I was greeted by fashionable clothes that would put any runway fashion show to shame. The ladies were wearing sheer see-through clothes of all colors, called Dirac, which means wedding clothes. The women were wearing Dirac of every color under the sun. Long, flowing colorful dirac dresses, each one more beautiful and well-tailored than the other, are made up of three parts.  Dirac, which is the main dress, can be sewed in any fashionable way you want. Gurgorad is an underskirt, usually worn underneath the dirac and it is plain with lace designs at the bottom of the material. It usually matches the main color of the dirac. The last part is garbasar, a thin piece of clothing, like a shawl worn on the shoulders.

(Photo at left from Kabayare Fashion website, where they have many beautiful dirac.)

Why do we wear revealing clothes at weddings? It is a time to shine and to celebrate and, for some, to leave the hijab and all forms of confining clothing behind for an evening with other women. We are all humans and as humans we have flaws, we have issues and things we want to fix about us, but somehow can’t. So we go through life thinking, “Someday I will be better,” or “Someday I will do this or that, but until that day comes I will not worry about it, but focus what is easier to do right here and now.”

So, we wear revealing clothes in the meantime to weddings because it is this one expensive, luxurious and outrageous outfit you can wear for one night. In a way, it is like going to the Academy Awards. It is one night where your neighbor or your imam can’t judge you because it has become socially acceptable.