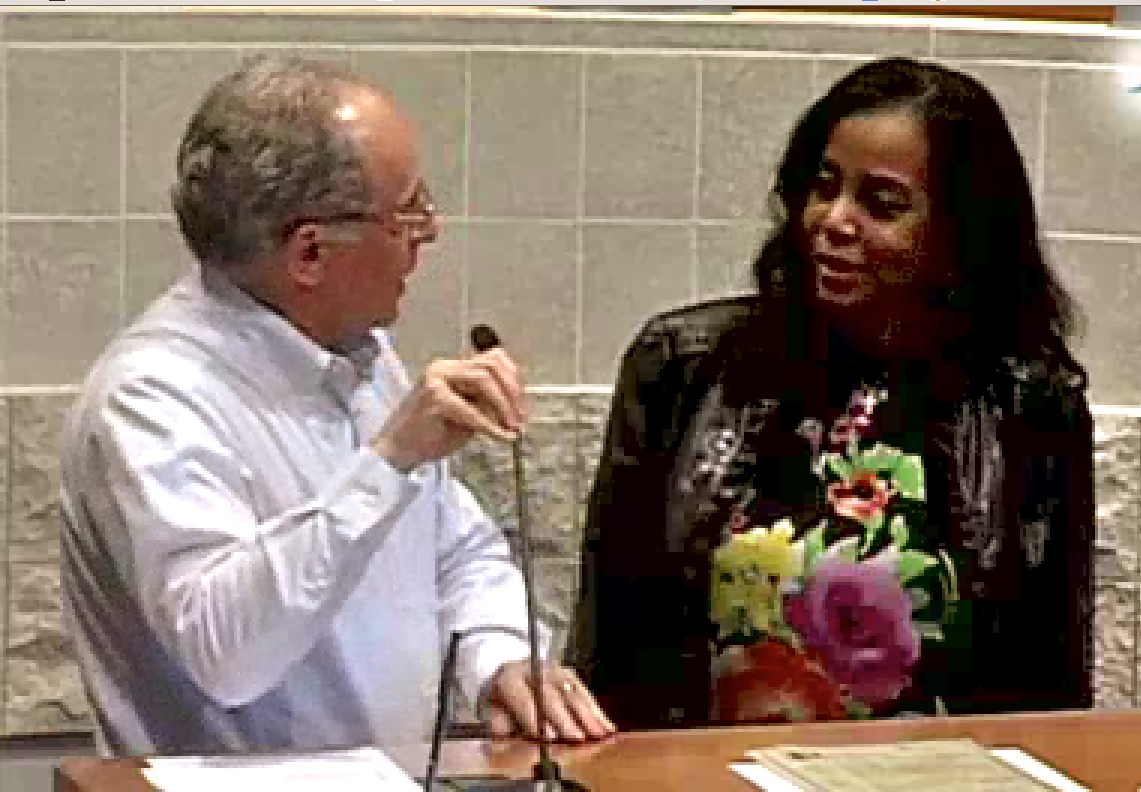 For a little more than an hour, Lynne Jackson of St. Louis, Missouri had commanded the attention of a large gathering of Minnesotans in Bloomington’s Civic Plaza. Jackson’s engaging, slide-illustrated presentation described the human element that led up to the infamous 1857, U.S. Supreme Court Dred Scott Decision. That decision held that African Americans could not be citizens and could not sue in federal court; that Congress did not have the authority to prohibit slavery in U.S. territories; and that slaves like Dred Scott did not qualify for emancipation for having lived in the slave-free parts of the United States.

The Dred Scott Decision has long been scolded by legal scholars as the worst ruling ever made by the nation’s highest court. The decision was preceded by an eleven-year attempt in Missouri and Federal courts by Dred and Harriet Scott and their attorneys to gain their freedom from owners who refused to part with what they considered “private property”.

Lynne Jackson spoke of Dred and Harriet Scott – of their key and inspiring role in the emancipation of slaves and the challenge of the American dream; she spoke with historic detail and personal insight; they are her great-great grandparents. 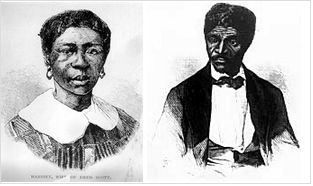 The May 22nd event had begun with an amiable buffet of toothpick-spearable meatballs, cheeses and fruits in the handsome, Bloomington Civic Plaza atrium; it is a pubic commons edged by theaters, art galleries, a gift shop and municipal meeting rooms.

The event’s chief sponsors, The United States District Court-Minnesota, the Minnesota Chapter of the Federal Bar Association and the City of Bloomington Civil Rights Commission and Parks Division, explains, perhaps, why the crowd was chatty and informed.

This was their comfort zone and, befitting Minnesota custom, everyone sported a name tag. Judges, lawyers, law students, history buffs, community leaders, civil rights activists, municipal officials and un-fancy guys like myself – this color and that – were all equal before (1) the law and (2) the League of Women Voter ladies at the front table with the sign-in sheets.

Dred Scott and Harriet Robinson Scott had lived and were wedded not far from Civic Plaza or, for that matter, Mall of America, Minnehaha Falls and a Burger King or two. They were slaves owned by U.S. Army Surgeon Dr. John Emerson who had been assigned to Fort Snelling. From 1836 to 1840, Dred and Harriet served two tours at the local fort before and after a short posting at Fort Jessup, Louisiana before being moved to St. Louis.

At that time, most of what was to become Minnesota was designated the Wisconsin Territory where slavery was prohibited.

Missouri law, while permitting slavery, also provided that slaves who had lived in slave-free U.S. territories or states were free if they moved or returned to Missouri. “Once free always free” was the non-musical coda for anti-slavery activists.

The Scotts’ residency at Fort Snelling provided their long series of legal petitions and appeals for emancipation with merit, but the Missouri Supreme Court and then the U.S. Supreme Court controversially shunned the U.S. Constitution and precedent to deny them freedom.

As Lynne Jackson traced her personal journey of discovery of her familial tie to Dred and Harriet Scott, she shared with us an account of a reunion of sorts between her family and the descendants of Peter Blow, a Virginia planter who had owned Dred when he was a child. The Blow family and their slaves moved to Missouri via Alabama where Dred was eventually sold to Dr. John Emerson, the Army officer who had brought him to Fort Snelling. It was Peter Blow’s sons who, soon after the 1857 Supreme Court decision, agreed to purchase the Scotts for the express purpose of granting them freedom. Dred Scott lived only thirteen months as a free man before succumbing to tuberculosis, Harriet lived until June 1876.

Wednesday’s program was more than a history lesson; it was part of a multi-day line-up of events intended to more clearly define and celebrate Minnesota’s connection with the Scott legacy. In 1971, the City of Bloomington had named a 48-acre complex of athletic fields in honor of Dred Scott but as community leader and former youth baseball coach Thomas F. Nelson confessed from the stage on Wednesday, there was no plaque and little interest in the park’s namesake. He recalled that his dugout talks about Dred Scott to his various teams were met with the bored-rolling of teenager eyes.

My son Alex played Metro League fall baseball at the Dred Scott complex four years ago. I knew of Dred Scott but not his local connection and thought that naming a bunch of ball fields for him was perhaps a curiosity engineered by, say, some well-meaning but forgotten Black History Month committee of do-gooders. I didn’t give it much thought; my kid was hitting doubles and triples.

St. Paul-based human rights advocate Frank White did give it a lot of thought and has been credited with jump-starting local interest in the Scott legacy, beginning a with plaque for the playingfield. The Bloomington Human Rights Commission and others agreed with White. Some of them, including Nelson and U.S. District Judges the Hon. Donovan Frank and the Hon. Michael Davis, were among those who shared with us their perspectives on the initiative.

The evening concluded with Bloomington Mayor Gene Winstead reading proclamations designating Sunday May 26 “Dred and Harriet Scott Freedom Day” and re-dedicating the athletic fields to the memory of both Dred and Harriet. The long list of supporting proclamative “where as …” clauses leading to the few “there for be it resolved …” clauses would serve well as a history teacher’s time line and was read in full by Mayor Winstead with humility and gravitas.

A freshly minted, handsome, interpretative sign (rather than a simple plaque) was then unveiled by White, Nelson and Bloomington Parks Director Randy Quale; it will be installed this summer.

The germination the plaque project has happily sprouted into a much broader mission. The story of Dred and Harriet Scott’s signature role in American history has become part of Bloomington Jefferson High School’s curriculum and their story is being provided more prominence at Fort Snelling where visitors can visit their quarters.

A traveling, one act, Minnesota Historical Society play has been written and is being performed in area schools and other venues. Set during the last year of Dred Scott’s life in St. Louis, the three character drama imagines how Dred and Harriet might have confided with one another about their long ordeal and their new lives as free citizens. Bruce Young and Dominique Jones performed the title roles not as historic icons, but as a long-married couple with the grit that had enabled them to survive lives of servitude.

In stirring asides made directly to the audience, the Frederick Douglass character underscored the evil threat that slavery was posing to human welfare and the nation whole. The charismatic, eloquent and moral spirit of Douglass, an escaped slave who became not only an author and statesman but arguably the most resonant abolitionist of the 19th Century, was convincingly channeled by another lauded practitioner of the written and spoken word, Minnesota Court of Appeals Judge Kevin G. Ross.

My moral and civic compass is regularly informed, inspired and refreshed by the African-American experience. After months of often dysfunctional Washington and State Capitol politics; right wing bloviating and liberal hyperventilating, mass killings, gun rights paranoia, xenophobic mudslinging and a future with aerial drones and global warming, it was a joyous relief to be among regular, good-hearted Minnesotans celebrating the hard-to-come-by human progress sparked of a common man and woman.

On Thursday, Lynn Jackson visited, for the first time, the very Fort Snelling quarters where her great-great grandfather Dred and grandmother Harriet lived. This has been a very good week for Minnesota.