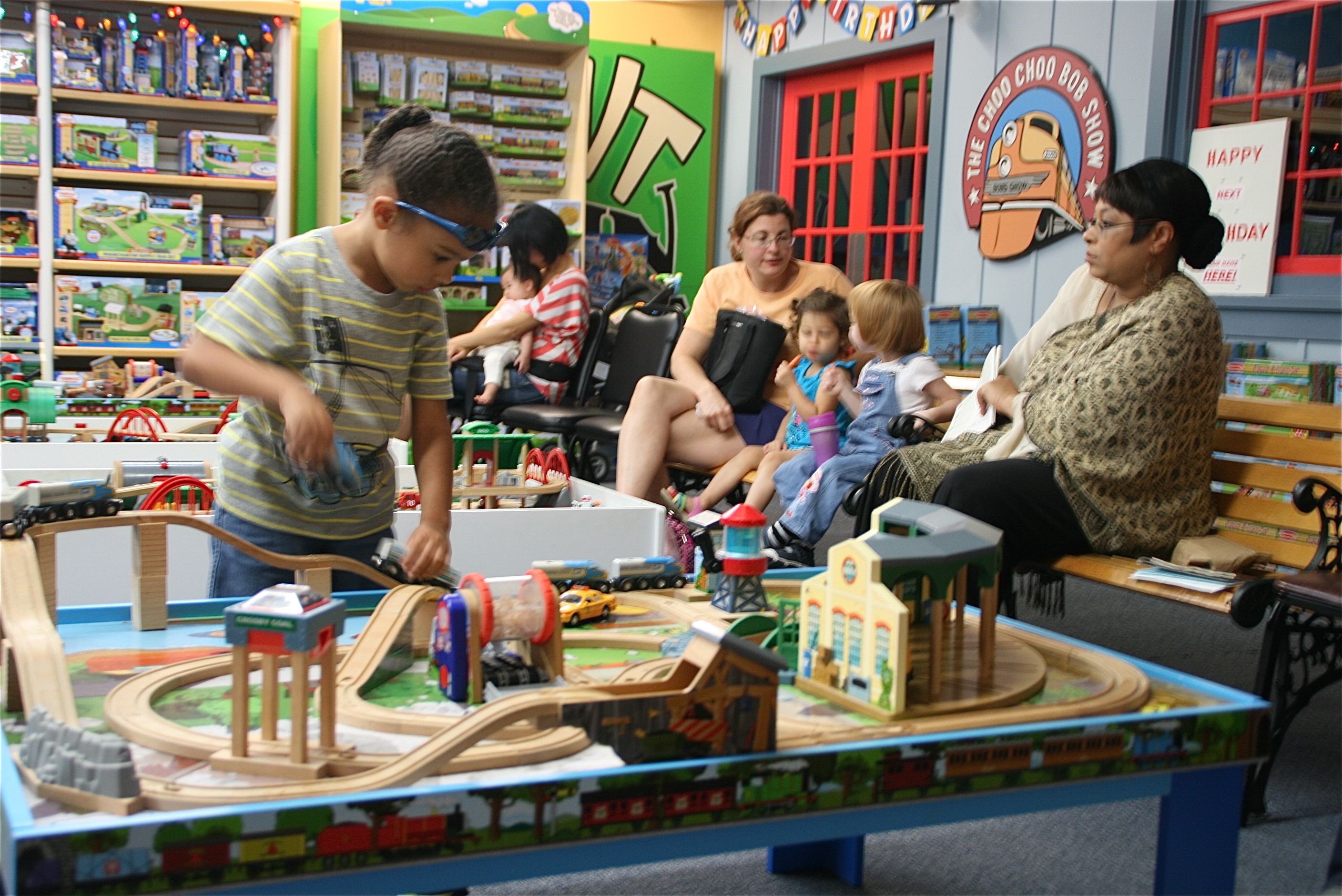 The year was 2005 and the first signs of the economic downturn, coupled with funding cuts to a Minnesota Film Board program that had brought movie jobs to Minnesota, were making it hard for Bob Medcraft to find a job. So, after a successful career making movies, music videos and commercials, Medcraft turned to his first love – trains. He opened Choo Choo Bob’s store on St. Paul’s Marshall Avenue, painting a colorful sign above the entrance and filling the front windows with train related models, toys and games. “It was a labor of love. Or, it was complete insanity,” he said.

Medcraft’s original idea was to sell to serious collectors, but he found that his real customers were kids and their moms. A lot of hobby train stores are hands-off places, he said, but that’s not what he had in mind. “We still sell to serious hobbyist, but our main customers are both boys and girls until first grade and then boys until fourth grade.”

At the front of the store, ready to greet the littlest train buffs, is Paul Howe. Howe had retired from the Minnesota National Guard and was looking for a part time job when he saw a help wanted sign in the window of the soon to be opened shop. He called and got an interview. “I asked if I could wear a uniform,” he said, and he was hired. He shows up to work in a train engineer’s outfit. “The kids stared calling me Engineer Paul. Then, after the first Christmas, I started doing story time. We packed the house.”

“My brother and I got our first train outfits when we were five years old, so this job is a really good fit,” he said.

It wasn’t always clear tracks ahead for the store. When the Great Recession hit, sales dropped 40 percent. “We went into the tank,” Medcraft admitted. Hoping to drive traffic to the store and with some of his friends from the local film industry, Medcraft produced a series of YouTube commercials – the Choo Choo Bob Show – that evolved into an old-fashioned, live-action local children’s show. The show revolved around the adventures of a group of characters living and working at a train station in the little town of Bobville. (Medcraft remains the producer, but the part of Choo Choo Bob is played by actor Sam Heyn.)

Parents and kids were beginning to notice the show when money ran out on that as well. That’s when an unlikely hero came to the rescue. Robert Vince, a lifelong train fan, the inventor of an HIV drug, the Director of the Center for Drug Design and a professor at the University of Minnesota, met Medcraft through Choo Choo Bob Show actor Rich Kronfeld. Vince thought the store and the show deserved a second chance and he became business partners with Medcraft.

“I gave them the money and they started filming,” said Vince, who now holds the title of executive producer. “I would go watch them film. It’s just a nice thing. The store was part of it, too. I thought if we get the store going better, we can help the show and pay the actors and crew. I like the idea of it. It’s just fun for me.”

As hoped, the show has lured more customers to the store. A Monday morning trip to Choo Choo Bob’s found it filled with preschoolers. The kids watched the model trains or played with trains set up at the back of the store. Some wandered the aisles, arms filled with items for mom, or a grandparent, to buy them. There are also two party rooms, each able to hold up to 16 kids and parents.

The Choo Choo Bob Show is now airing on Channel 45 in the Twin Cities. Medcraft continues to shop the show to various networks and television stations. It’s already been nominated for six Upper Midwest Emmy Awards, with winners to be announced at a ceremony at the State Theater on Sept. 28.

The show and the store are starting to generate their own industry with a children’s book, — Holy Smokestacks! —and DVDs available at the store. You can buy t-shirts with the store’s logo for little fans. The show’s cast appears live in a number of venues around the Twin Cities, including shows at the State Fair.

Medcraft is starting to think about the location of his next Choo Choo Bob store. There’s been talk about the Mall of America, a local strip mall or maybe even moving into a market where the show is popular, perhaps in North Dakota, perhaps beyond. “It would be a lot of work,” Medcraft said. “Where would we find the time?” He smiled. “Success is a good problem to have.”

CORRECTION 9/18: Choo Choo Bob’s previously aired in six local Midwest markets, but is currently only in the Twin Cities market.

Bob Medcraft at his store on Marshall Ave. in St. Paul

Elaborate train sets decorate the windows of the store.

Girls lose interest in trains at about 1st grade, but boys like them for longer.

Kids can play and moms can take a breather at the toy tables.

These toys may end up back at home.