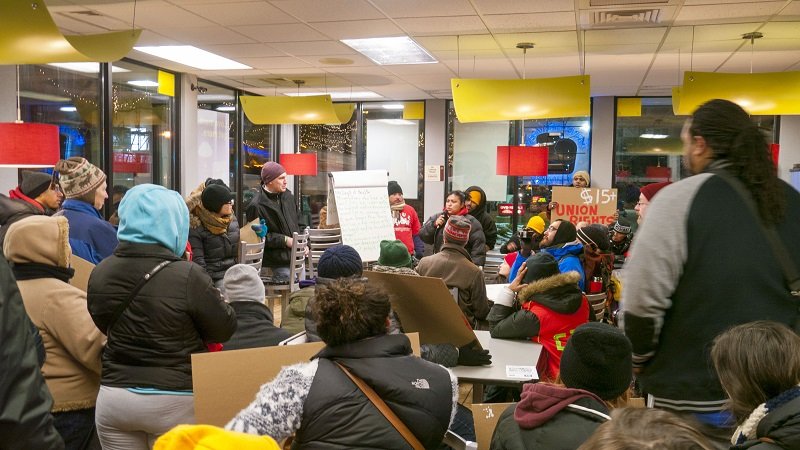 Fast food workers, home health care workers, airport employees and dozens of supporters blocked traffic outside an Uptown McDonald’s on Dec.4, demanding a $15 minimum wage and union benefits. More than 50 protesters marched into the nearby McDonald’s where several employees walked off the job.

Thursday marked two years since fast food workers first walked off the job in New York City to demand a living wage, sparking a movement across the country. Minneapolis first joined the “Fight for $15” in September, when workers went on strike for a day at several fast food locations around the city. Just last week, nearly 500 people took part in a Black Friday protest at two Walmarts in St. Paul and Minneapolis, including dozens of retail janitors who walked off the job. The protest was organized by Centro de Trabajadores Unidos en Lucha (CTUL).

Uptown McDonald’s employee Guillermo Lindsay spoke to protesters through a megaphone inside the fast food restaurant while his manager looked on, but said he wasn’t fazed by the situation.

“It felt good. I felt powerful to let them know I have a lot of supporters have my back if you do decide to retaliate,” Lindsay said. “Over 150,000 workers are behind me.”

After talking about unions and the economy inside the fast food restaurant, protesters marched outside where they blocked traffic at the intersection of Lagoon and Hennepin Avenues.

Brooklyn Park home healthcare worker Shaquonica Johnson said she has two children and often struggles to make ends meet with each paycheck. She frequently puts the well-being of her children before her own, she said.

“There were times that I was able to get them food, but I couldn’t eat,” Johnson said. “So it was a struggle.”

Earlier this fall, home healthcare workers in Minnesota voted to join the Service Employees International Union in the largest union vote in state history. Despite their different industries, Johnson said she and the fast food workers share common interests.

Among the supporters for the protest was City Council member Jacob Frey, who spoke to the crowd and offered words of support.

The Minnesota legislature passed a bill that raised the minimum wage to $8 an hour earlier this year, which Minnesota Gov. Dayton signed into law in August. Veronica Mendez Moore, the co-director of CTUL, said the law was a step in the right direction, but not enough.

Mike Darula, owner and operator of the Uptown McDonald’s franchise, said in an emailed statement he respects the protesters’ right to assemble, and that his wages are in line with the law:

In my restaurants, wages are set according to local and federal laws, the competitive marketplace and job level.  We believe that any minimum wage increase should be implemented over time so that the impact on owners of small and medium-sized businesses is manageable and feasible.

Despite the resistance from McDonald’s owners and executives, organizers are making significant progress across the country. Just this week, the Chicago’s city council approved a bill that would raise the city’s minimum wage to $13 an hour.

CTUL organizer Merle Payne said the Chicago bill is a great achievement for their movement, and Minneapolis should take notice.

“These workers are your next door neighbors. Their part of our community, and these low wages make my neighborhood a worse place to live,” he said.

Correction: A previous version of this article incorrectly stated the date the protest took place. It happened on Dec. 4, 2014.