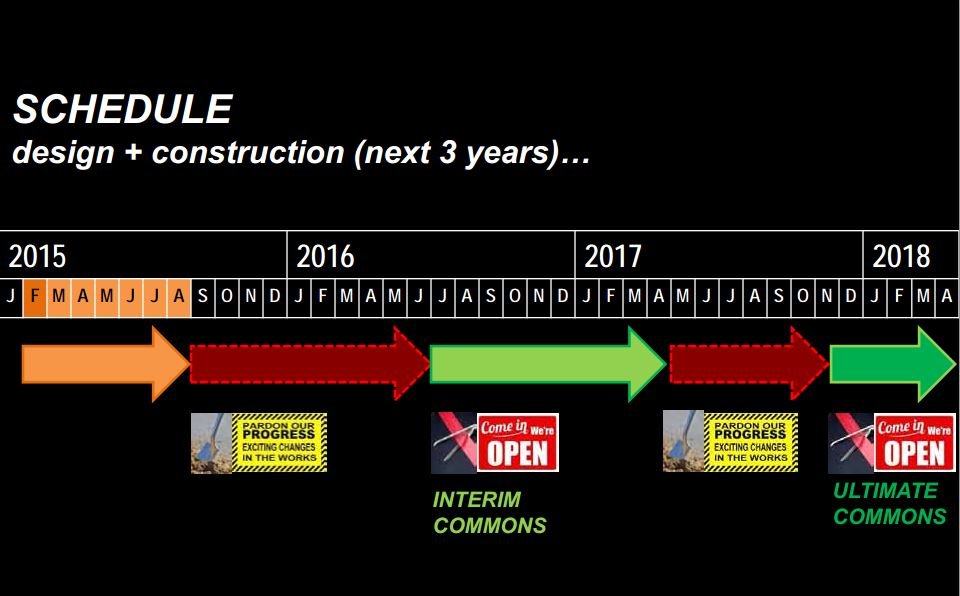 By far the most ugly slide in the presentation

On Tuesday night, a healthy crowd of local downtown residents and other interested parties gathered in the rustic lobby of the Mill City Museum for the first of several public meetings about the forthcoming Downtown East Commons park. It was a fun atmosphere, with the palpable enthusiasm that comes with the chance to shape big changes in the place where you live. There were also cookies.

There were two purposes to the meeting. The first was to give locals the chance to hear from the landscape architecture firm chosen by the city, Hargreaves Associates. The presentation given by Hargreaves’ President Mary Margaret Jones was well received, and it’s clear that the city has made an able hire. Hargreaves has a huge amount of experience in planning parks all around the world for drastically different functions, and their perspective on the Commons was fairly comprehensive in scope, even if few details were at hand this early in the process.

The second purpose of the meeting was to gather community ideas. As is always the case at these meetings, some ideas are great and many are awful, but the real use lies in recognizing the community needs under the surface. Most of the values stated were fairly obvious (this just in: Citizens Call For Park To Be Safe), some were revealing (there was broad consensus that the park should have as little hardscape as possible, and also that it be aggressively programmed), and some niche concerns appeared (a group of climbers advocated for a climbing feature). The planners will now take this information, as well as the results of this online survey (which, no joke, they will make into a word cloud) and probably ignore all but the most high concept ideas. On April 8th, the second community meeting will be held, and the planners will present three distinct directions in which the park could be taken, leaving the community to make their preference clear.

Likely the most useful bit of information to come from the meeting was the establishment of the park’s timeline, which to my knowledge has not been well communicated. The idea is to complete the park in two stages. The first will be completed by Ryan Companies and will be largely a bare-bones green space. It will open in late summer of 2016 so that the Vikings can use it during their season. It will close after the Vikings season is complete, and a second phase of construction will begin, in which the Hargreaves design will be implemented in full (it’s unclear how much of a say Hargreaves will have in the “interim park”). This will be completed in time for yet another Vikings season, with the park totally done before the 2018 Super Bowl.

By far the most ugly slide in the presentation

The park’s schedule reflects the fraught nature of “The Commons” as being in large part a private space under the sway of the Minnesota Sports Facilities Authority and the Vikings. The latest plans for the park reported in the Star Tribune indicate that “The Commons” could be gobbled up by football interests for up to 60 days a year, plus time for event set-up and strike. Whatever was said on Tuesday’s meeting, it will probably have less bearing on the design of the park than whatever is required by the MSFA and the Vikings organization.

A River of Cars Runs Through It

The meeting also highlighted in stark terms the single biggest problem of the park; it will be bisected by Portland Avenue. Early in the process, Ryan Companies retreated from their proposal to close Portland and Park Avenues, due to opposition from Hennepin County, which didn’t want to limit access to the Hennepin County Medical Center, and which also feared more congestion on neighboring streets. Interestingly, during Viking game-days, the streets will be closed, as apparently people do not drive or need medical attention on Sunday afternoons.

There’s no way around it: these roads drastically limit the potential of the Downtown East Commons. Before withdrawing their street-closing proposal, Ryan Companies produced apair of renderings that have usually been used by the media in talking about the park. These renderings give a highly inaccurate idea of what is possible. In reality, the park is split into two blocks, which will be separated by a street that is currently five lanes wide (three with traffic, two for parking, and one bike lane) and may not be shrunk. At the meeting, nearly every group addressed the road in some way. Some suggested the road become a tunnel. Other suggested there be a bridge built over the road. Maybe an artificial hill could be built on either side of the road, with a fancy glass bridge connecting the two halves. Whatever. Regardless of what steps are taken, it’s obvious that pedestrians will play second fiddle in their own park to cars. Given the fealty of elected officials to preserving traffic flow on Portland, would the county even accept traffic calming measures on the street? You’d hope they’d at least do that, but until we know for sure, it might be better to think of the park as two separate spaces with little connection to each other. Oh, and there’s no plan to expand the sidewalks on 4th Street, which means crossing it to reach whatever coffee and sandwich shops end up in the Wells Fargo towers will be hazardous.

I came away from the meeting feeling conflicted. On one hand, I felt as though the wishes of the community were clearly expressed, and that the architects would do a good job with what they were given. But all the talk of making the Commons a signature space in downtown has plainly been betrayed by the limits that have been placed on the park by the city and county. The use of the park for Vikings game-day was inevitable, and not necessarily a bad thing. The additional dates reserved for the MSFA and the Vikings could be a boon if both organizations take their programing responsibilities seriously. But the combination of these with the municipal resolve to maroon the park on an asphalt island is dispiriting.

Perhaps it’s too much to expect our outlook as a city to change all at once. As I left, I spoke with a woman about the street problem, and she asked me in reply, “They’re calming all the other streets throughout the city, where else are cars supposed to go?”

There’s a lot of work left to be done. I’m eagerly awaiting the design concepts that Hargreaves returns with in early April. Every site has challenges, and I hope they can overcome ours.