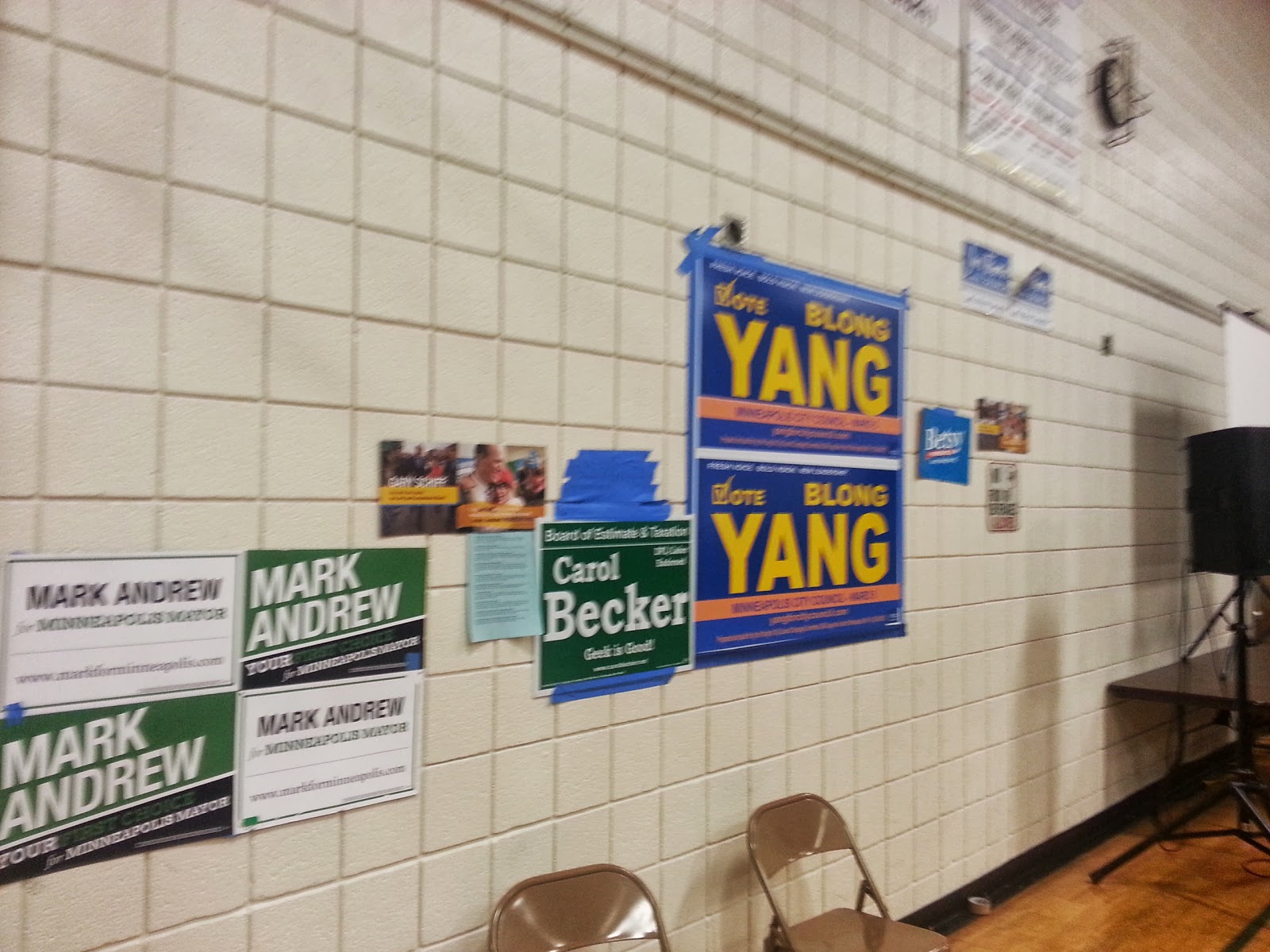 I am not a fan of ranked choice voting, and Saturday’s Ward Five convention did nothing to endear me to this new process.

At another convention where I was volunteering for a mayoral candidate, I wound up talking with Kim Ellison for almost an hour about RCV, and much of that dialogue centered around aspects of this system that I *do* like–for instance, candidates are adopting a much more civil tone in their campaigns. I just happen to think we’re using ranked choice in all the wrong elections. (For instance, the lack of a primary makes it hard to weed out “vanity” candidates who have no chance of winning. But look at last year’s state representative primary election. Ranked choice voting then would have saved us from a contentious recount.) This voting process has its upsides, but Saturday revealed a few drawbacks as well.

At the fifth ward DFL convention, the chair brought up RCV as a possible way to facilitate the endorsement process. Here’s how it (I use the next word loosely) worked: The first ballot used RCV as a model. So we had four candidates running. The candidate who finished last (Ken Foxworth) would be dropped off of the count. And all/both of Ken’s votes would then have their second choice be counted in a new tally. Then the third-place candidate, Blong Yang in this case, would go through the same process. If Foxworth’s two voters indicated a third choice, that’s where their votes would go, or they would disappear into the ether along with whatever delusional ideas this guy has about being elected.

Blong’s supporters would have their second choice – either a specific candidate or “no endorsement” tallied. And then we would automatically narrow the field to the remaining two, Brett Buckner and Ian Alexander.

And that’s precisely what happened. Ian and Brett and “no endorsement” were the only three choices left after one ballot. If we had gone the traditional convention route, it probably would have taken three or four ballots to arrive at this point. So ultimately, this was a good choice, right? Well, no. Here are several reasons why:

First off, there was NO discussion allowed by either co-chair, Sen. Bobby Joe Champion or Brian Bushay. True, people favored RCV as a method by probably 67% to 33%. But remember, a greater percentage actually supported voter ID as a seemingly common-sense constitutional amendment until they learned more about that system’s pitfalls. At political conventions, a decision of this importance, especially one that was quite literally unprecedented, generally results in the chair taking a few moments to ask for discussion. (Ten people come forward, five for and five against. You have one minute apiece to make your argument. Go. This is how it usually happens.)

So the delegates had quite literally no chance to be informed–pro or con–about what RCV would actually mean in this circumstance. A quick yes-or-no vote was all it took and the rules were set.

Secondly, ranked choice voting proponents tout its ability to expand the field of possible candidates, so that voters have more choices. In this case, whether intentional or not, RCV served to prematurely limit choices. Furthermore, this method is supposed to give a more accurate representation of the will of the voters. Again, RCV took us farther away from that goal. Here’s how:

In a typical convention, the time between each ballot can be used by all the candidates still eligible for endorsement to talk to other delegates, to try to persuade them to change their support, or at least engage in dialogue. Sometimes, as was the case in last year’s senate district convention, the remaining candidates continue the question-and-answer session during the down time. It can be exhausting, but it’s also the most extensive face time the community has with its candidates. The value of such an exchange should not be underestimated.

In a traditional format, Blong Yang would have had opportunities to bring more delegates over to his campaign. In all likelihood, he still would have been dropped from the ballot by the third or fourth tally for not having a requisite number of votes. But having several ballots with three candidates to choose from would have been a more accurate reflection of what the delegates wanted.

Finally, the way in which RCV was employed did not save any time. Many voted for this method under the assumption–stated by proponents–that counting the first ballot this way could be done quickly. That turned out not to be the case, as the first ballot took more than twice as long to count as the second through fifth ballots. The unstated assumption was that by immediately winnowing the field to two candidates, the convention would arrive at an endorsement more rapidly and we could adjourn early. Instead, the maximum of five ballots were exhausted, and almost half of the delegates wanted to continue past the five-ballot limit until Ian Alexander would have won the endorsement.

Ranked Choice Voting is supposed to expand the field of candidates. In this case, it did the opposite. It is supposed to foster more dialogue, and it gave us less. It was supposedly going to save time or at least not add much time to the convention, and it failed in that regard as well. So why did we use it? I believe we did so because RCV is the hip, new, trendy thing that we’re all supposed to get behind because it’s what the cool elections are doing these days. While there is a lot to like about RCV, the fifth ward convention clearly showed that it is not a one-size-fits-all mechanism for every voting scenario.