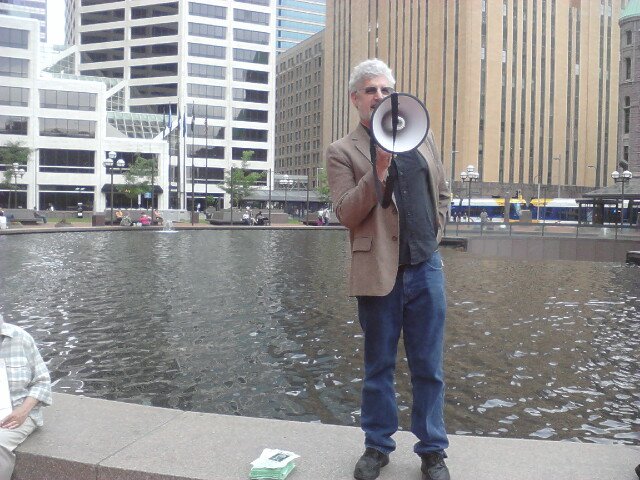 There are a total of 7 candidates for Minneapolis School Board, citywide, who will be on the ballot in the primary election, to be held on the 2nd Tuesday in August.

I am a candidate for the MInneapolis School Board because I believe that education is a right, not a privilege, and that a quality education should be available to all on an equal basis.

In my opinion, the superintendent and board of directors of the Minneapolis Public Schools are on the wrong track. The district is promoting and sponsoring charter schools, maintaining a large pool of probationary teachers who are concentrated in high poverty schools, and pushing a scripted, test-prep curriculum that is marketed as managed instruction.

I reject the idea that the chief source of inequity in the school district is bad teachers who can’t be fired because of seniority, tenure, and due process rights, and that the solution is to eliminate those job protections for teachers. On the whole, I believe that teacher job protections are beneficial to students in the district’s schools. There are states where teachers unions are illegal and teachers are employed at will and very easy to fire, and yet there is no evidence to suggest that public schools in those states are more equitably governed than in states like Minnesota where teachers are unionized, have seniority, tenure, and due process rights.

Gaps in test scores and other outcomes along income and racial lines are both a reflection of the impact of poverty on children and their families, and of policies and practices by the district that have a disparate impact on students of color and poor whites. The achievement gap could be called an access gap because it is a reflection of an access gap: Access to a quality education, to employment, to housing, to justice, and other things. There is widespread, covert, racial discrimination in employement and housing, but no government agencies empowered to detect the discrimination and prosecute the discriminators. The minimum wage should be a living wage, and not a poverty wage. Instead of a war on drugs, there should be a war on poverty.

Background as an NAACP activist

I served on education advocacy committees of the National Association for the Advancement of Colored People (NAACP). In 1998 and 1999 I was a plaintiff in lawsuit that was combined with the NAACP lawsuit filed in 1995, which alleged that the Minneapolis School Distrtict had failed to adequately educate many of its students. The NAACP lawyers argued that the Minneapolis School District was doomed to fail the majority of students of color and low-income whites because of extremely high child poverty levels citywide, and because of the high concentration of poverty in neighorhoods where people of color are concentrated. The first settlement proposal by the NAACP, early in 1999 called for a metro-wide desegregation plan that gave students in high poverty schools the option of attending any school in the Metro area.

The 1999 settlement offer made by the NAACP lawyers was rejected through a consensus decision making process by the Minneapolis NAACP branch, involving the education advocacy committee, the branch executive committee, and general membership meetings. I had distributed a written critique of the settlement proposal. The settlement proposal stipulated that a metro-wide school choice program would solve the problem of students being inadequately educated. I noted that there are policies and practices of the Minneapolis School District that have a disparate effect on students of color and poor whites. The district was going out of its way to segregate students by income and race. The district assigned a large majority of its students to watered-down curriculum tracks. The district maintained a large pool of probationary teachers who are concentrated in high poverty schools. The NAACP lawyers, led by Dan Shulman withdrew as my legal console because I had shot down their settlement offer. I represented myself for several months, then withdrew as a plaintiff.

Running for a cause, not just for elected office

I was a co-founder and director of the Minneapolis Parents Union. We helped parents and students understand their rights and responsibilities, and provide a trained advocate as needed. Evelyn Eubanks did most of the individual advocacy work. All of us regularly spoke at school board meetings on policy issues. Evelyn Eubanks, Barbara Koch Smith, and I ran for the Minneapolis School Board in 2001. We focused on district actions that had disparate effects on students of color and poor whites. In 2001, Evelyn got enough votes in the primary to get her name on the general election ballot. School Board elections were switched to even years in 2002, when I got enough votes in the primary to get my name on the general election ballot. I got a little more than 20,000 votes, about 20% of the vote in the 2002 general election. I also got my name on the general election ballot in 2006, 2008, and 2012. Each time at bat, I got more votes, and a bigger share of the vote. In 2012, I got 31,300 votes / 25% of the vote.

I defy the rule that candidates should avoid controversial topics, especially if one takes unpopular positions. My views about the role of actions by the board and administration as a source of inequity in the school system displease many of the organizations that endorse and support school board candidates, including important power brokers in the DFL. However, my message appears to resonate with a majority of voters who hear it. On the campaign trail, I have asked many people if they plan to vote for school board candidates, if they recognize my name, and if they have some idea about what I stand for. Of those who say they plan to vote for school board candidates, about half don’t recognize my name or don’t have any idea about what I stand for.

I am the same Doug Mann who ran for Minneapolis Mayor in 2013 and filed a lawsuit to force the city council to refer approval of the Viking Stadium taxes to the voters in a referendum. I also filed a petition for a writ of prohibition in the Minnesota Supreme Court to restrain the commissioner of Minnesota Management and Budgert from selling stadium bonds, alleging that the bond sales were authorized by an unconstitutional law: Section 1, article X of the Minnesota constitution does not permit one sovereign to pay the debt of another sovereign, or to raise taxes exclusively in a city or other subdivision of the state for any purpose that does not peculiarly benefit residents who are being taxed.