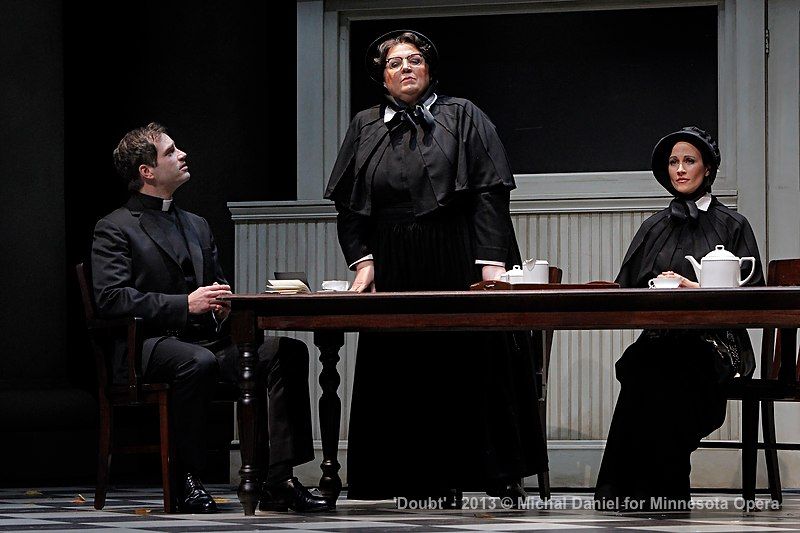 The Minnesota Opera is presenting the world premiere of Doubt, an opera based on the play and movie of the same name written by John Patrick Shanley. Shanley had the idea of doing an opera because of the depths of emotion and conflict in this story. He approached the Minnesota Opera and collaborated with composer Douglas Cuomo.

I have now seen three operas presented through the Minnesota Opera’s New Works Initiative, which is celebrating its 50th anniversary in 2013. They regularly invite bloggers to the final dress rehearsal for their productions. It appears to be a successful program for all involved. I am allowed to view and write about opera—an art form that I had not previously been exposed to. Since I generally write about baseball and my life, people who would be interested in what I write now get thinking about opera. Also, attending a dress rehearsal allows me to observe the fascinating technical process of bringing an opera to life.

Both Shanley and Cuomo spoke to our group prior to the performance. They talked about their first collaboration and the challenge created in converting a dialogue-driven story into an opera where the music often tells the tale. As Shanley said, “You can hear what people are feeling.” They often had the singers overlapping each other to enable conversations to flow within the structure of an opera.

Doubt tells the story of Sister Aloysius, a strong-willed nun who is principal of a Bronx Catholic school in 1964. For reasons that were not clear to me, she becomes suspicious of the young forward-looking parish priest and feels he might be acting inappropriately with one of the students. Fed by these suspicions, a young nun reports an incident to her which convinces Sister Aloysius that Father Flynn is guilty and has to be removed from the parish.

Written in 2004 as a play, Doubt explores the question of certainty versus suspicion in the context of sexual abuse by Catholic priests. The story purposely does not give the audience a clear ending, but leaves us to draw our own conclusions. Who is the real victim in this story?

Christine Brewer in the role of Sister Aloysius, Matthew Worth as Father Flynn, and Adriana Zabala as the young Sister James all gave strong performances. Under the direction of Kevin Newbury they were able to transport me back to 1964 and portray the strong emotions of the story. The set, designed by Robert Brill, uses a few set pieces to seamlessly take us from the altar of the church to the classroom to the school offices and church gardens.

I was intrigued by the story, moved by the emotional performances and left wondering what the truth is. What more can an audience ask for?