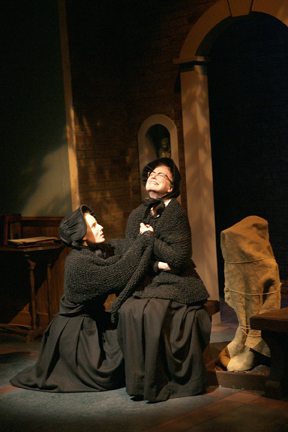 A riveting production of Doubt: A Parable is now playing at Park Square Theatre. In 2005, playwright Patrick Shanley’s play won both the Pulitzer Prize Award for Drama and the Tony Award for Best Play. Director Craig Johnson delivers a tight, well-paced and tense production of this multi-layered play.

Set in 1964, the play takes place in a Catholic school in the Bronx. On the surface, the play is about Sister Aloysuis Beauvier, the school’s principal, who suspects that Father Brendan Flynn, a popular and progressive young priest, is sexually preying on the school’s first student of color. Beauvier asks Sister James, a new and naive teacher at the school, to notify her if anything suspicious comes to her attention. Sister James soon notices that the boy came back from a private meeting with Flynn visibly disturbed and with alcohol on his breath. Although inconclusive, this suspicious event fortifies Beauvier in her belief that she must pursue Flynn in an effort to get him to confess.

The gripping nature of the play comes from the fact that the audience can never be sure of anything. Is Beauvier an intolerant representative of the old Catholic order out to get rid of anyone with new ideas, or is she truly concerned about the student with legitimate suspicions and knows full well that the male-dominated Church hierarchy will suppress any effort to expose a pedophile priest? Is Flynn a good-hearted priest who is reaching out to a troubled boy whose father regularly beats him…or is he a predator who has chosen a vulnerable target for a criminal sexual relationship?

“In the pursuit of wrong doing, one takes a step away from God,” is a line from the play that demonstrates Beauvier’s quandary. She feels compelled to both lie and make threats to stop this man she believes is a predator, but she also lives with the possibility that she may be damaging an innocent man. Sister James vacillates. She desperately wants to believe Flynn’s denials, but she can’t shake her own suspicions. At one point, James cries out to Flynn that Beauvier’s admonishments about teaching methods ruined her love of teaching—but is it Beauvier’s strict ideas about education that bother her, or is it the fact that Beauvier made her face a possible evil when she would prefer to be ignorant?

All of the performers put forth first-rate performances. Linda Kelsey is outstanding as the strict, relentless Beauvier. Instead of a caricature of a head nun, she creates a multi-faceted character that has her faults but one can’t help admire her resolve. Anna Sundberg plays the younger, more idealistic James character. Sundberg and Kelsey portray a caring, but limited, relationship between the two nuns.

David Mann plays Flynn, and he does a masterful job of playing a character who, with his nervous behavior and veiled threats, conveys the possibility that he could be either a master manipulator or an innocent man desperately trying to avoid ruin. Regina Marie Williams plays the mother of the young student who may have been victimized. Williams paints a sympathetic portrait of a woman who obviously cares for her son, but feels that allowing a priest to sexually abuse her son is the price that must be paid to keep her son in a good school. Because of her son’s “different” nature, she fears his nature invited the abuse and that he will be killed if he is forced to return to public school. Like Beauvier, one can’t help but be horrified by the mother’s apparent Faustian bargain—and, yet, realizes that her circumstances left her with little in the way of options.

Kirby Moore has designed a compact and functional set where the tight action easily flows between the pulpit, Beauvier’s office and the courtyard. Beauvoir’s office will strike a chord with any child sent to the principal’s office in the 1960s.

Park Square’s production of Doubt is one of the best dramas I have seen. For those looking for a compelling evening of drama, this production is a must.