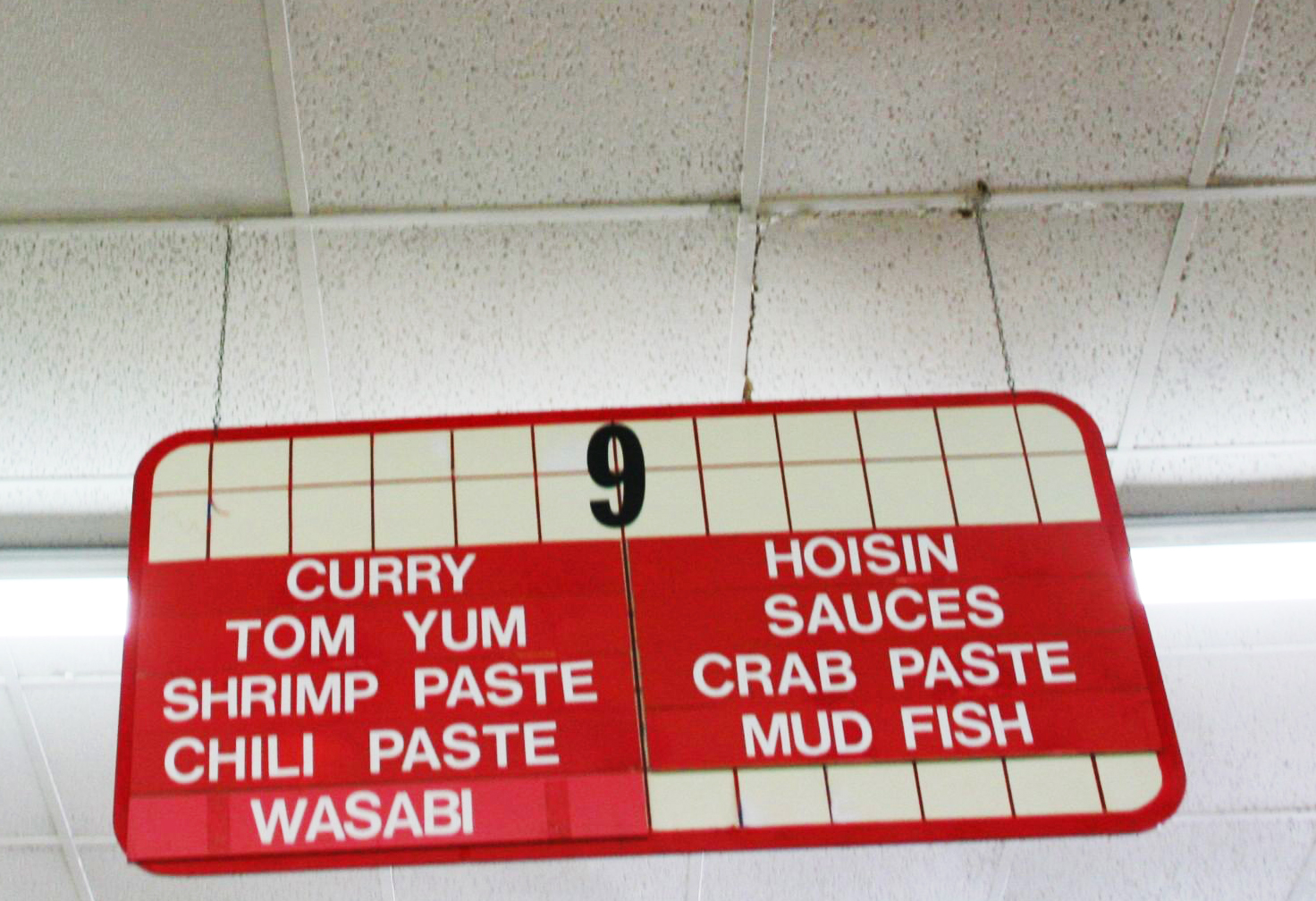 At Double Dragon Foods, at the corner of Maryland and Rice in St. Paul, I encountered something I’ve never previously experienced in any ethnic grocery store: hostility.

In most stores, small or large, the owners are willing—actually, they’re usually delighted—to talk with anyone, even a member of the press, about their store and the foods they carry. Not at Double Dragon.

I’d been wandering around, as usual, taking notes and photos when a large man stopped me. “You can’t take photos without permission of the manager,” he said. “Fine,” I said. Where’s the manager?” He went to find the manager, a young woman named Shing Yang, who asked me what I was doing.

“I write a column for the Twin Cities Daily Planet called Global Groceries,” I explained. “This week, I’m writing about your store.” I suggested that if she were worried, she could do the Google thing and look me up. Instead, she demanded to see my ID. Then she said she’d need to talk with the owner. By this time, five people were surrounding me, all bigger than me. I took notes.

Yang left, she said, to call owner Chu Ku (which was probably difficult because, it turns out, he was in Thailand) and then returned. “He said you can’t take photos,” she told me. She glared at me. It was like trying to cover a politician.

This is all too bad because the store is phenomenal. It’s a large ethnic foods supermarket with products from all five (maybe all six) continents. 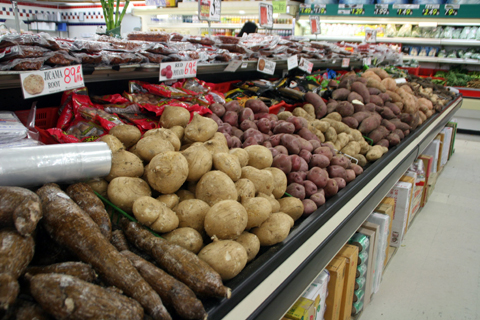 The produce section is probably the biggest customer draw. I saw two long rows of various tubers, from a dozen kinds of potatoes (sweet and otherwise) to vicanna and yampi. There are five kinds of bananas, large bins of sweet and hot peppers, tiato leaves, giant Taiwan cabbages (weighing four pounds and measuring a foot across), and a variety of other fresh greens, all at very good prices. You can even get green tomatoes, a rarity outside of late summer farmers’ markets. 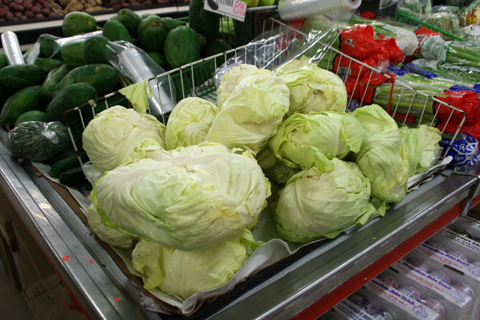 I bought some fresh kale from the big reduced-for-quick-sale bin for just under two dollars, enough for four large salads. 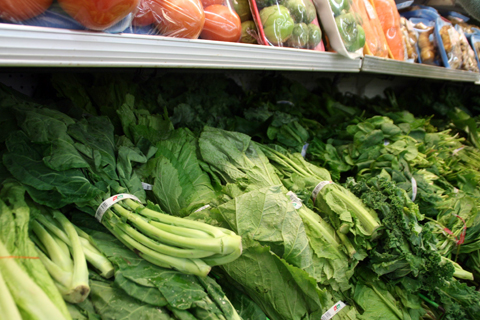 The meat and fish sections are extensive with at least six kinds of shrimp, whelks in the shell, whole frozen frogs (I wanted to take a photo, but was being watched by management), various innards and outards (intestine and cow skin), and a choice of hot or mild Hmong pork sausage. 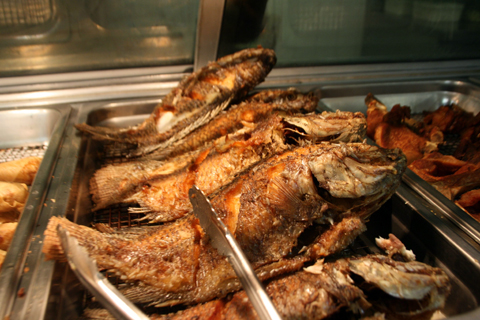 In the packaged goods and frozen foods area, you can buy foods from Latin America to the Caribbean to England to Africa to the Middle East and from all around Asia. 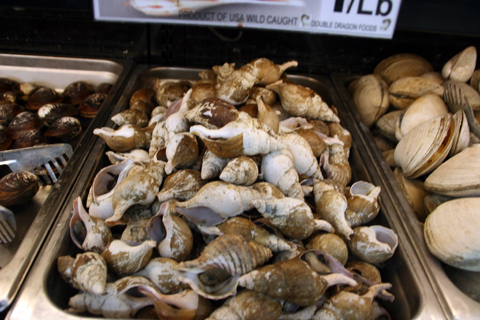 There’s an extensive deli section with hot meals, wrapped and ready to go, made on the premises. I tried the something-something with three sides. I’m not sure what it was (no label) but I’d have it again. There was even something else I’d never seen in a grocery store deli: a wonderful Lao fish laab, made with roasted rice powder and cilantro. And, they had boiled peanuts, which I hadn’t been able to find since my trip to South Carolina, after Governor Mark Sanford declared boiled peanuts the state’s official snack food.

If you speak only English, you may have to hunt around to get any questions answered. (I’m assuming that the staff are more receptive if you are not a member of the press.) I wondered how some of the employees communicated with each other. I heard Chinese, Vietnamese, Spanish, Hindu, Hmong, maybe more. The customers, too, seem to come from around the world. 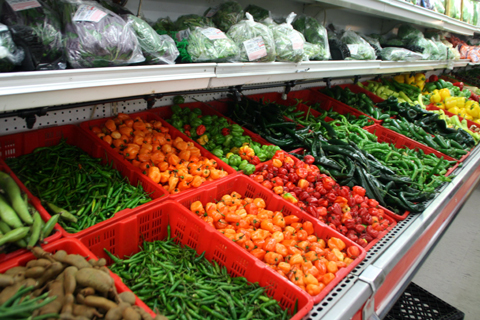 I was pushing a shopping cart, picking up items to purchase so I could try them at home, when manager Yang returned. “We’ve been getting complaints about you,” she said. “You’ve been bothering the employees.” I hadn’t, I explained, except to try to find someone at the fish counter who could speak English and answer a fish question. And, I pointed out, I was now a customer.

“If you’re shopping, I guess it’s OK,” she said, scowling. “But, don’t ask my employees any more questions. And, don’t take notes.”

I hope they let me come back. Maybe I’ll come in disguise.