It is appropriate that Israeli Prime Minister Benjamin Netanyahu is in the United States on the very day that Harold Camping has determined is Judgment Day: May 21, 2011, at 6 p.m. (As I write at 8 a.m. CDT, it is already 6 p.m. in Kabul, Afghanistan, and later still in Japan and Australia, and there have been no bulletins as yet, so perhaps Camping’s calculations were again off, as they were the last time he made his definitive prediction, but no matter…as I learned the End Times business in Catholic school, nobody knows the day or the hour or anything else for that matter. Sometimes mere mortals manage to attract and capture attention before returning to well-deserved obscurity. But people panic anyway.)

I’ve long considered New Jersey sized Israel to be the U.S.’s 51st state, albeit unofficial, and I’ve long considered the little country to have something of a death wish. With those biases up front, here are some memories from a January, 1996, trip to that tinderbox, particularly for those who’ve never been able to go there (it is worth the trip, by the way.)

1. Here is a geopolitical ‘picture’ of the place, from a postcard somebody distributed two or three years ago (click on photo to enlarge): 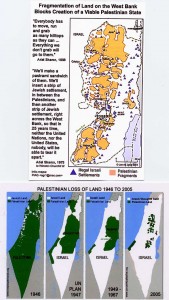 2. Here’s a recent and fascinating geopolitical history of the Middle East that takes perhaps two minutes to view.

3. Roger Cohen of the New York Times had an interesting column about the general history May 21. It is here.

In January, 1996, I was able to join a Christian group which spent a very meaningful week or more in Israel. One of our leaders had an apparent connection to the conservative Zionist ‘side’ – something I didn’t realize till much later, particularly when I reread the tour book we each were given. This sanction gave us a perspective and access probably not as readily available to other groups.

It was a powerful trip.

This was a time of relative peace in Israel:

There was no wall separating Palestinian Bethlehem from Israel; in Manger Square fluttered a two story banner with an image of Yasir Arafat, a candidate for President of Palestine.

I spent too much money (my opinion) buying a Christian manger set from Palestinian merchant in Jerusalem: I still have the figures carved from Olive wood, and we still display it at Christmas time.

We were able to visit the Moslem Dome of the Rock on Temple Mount. No shoes allowed….

Earlier we had visited Armageddon, actually Megiddo, which overlooks the Plain of Armageddon, which is where the end times are supposed to materialize; later we visited the south end of the Dead Sea, the fabled place of Sodom and Gomorrah. (There’s a hotel there now, fronting on the smelly sea. I suppose someone could actually drown in the Dead Sea, but they’d have to work at it.)

Even though it was a time of relative peace, belligerence was not far below the surface. We visited the fresh grave of Prime Minister Yitzhak Rabin, assassinated by a right-wing Israeli barely two months before we arrived, on November 4, 1995.

At the purported site on the Sea of Galilee where Jesus appointed Peter to lead the new Christian Church, our leader was reading the relevant Gospel text, when his words were drowned out by two Israeli warplanes screaming low and overhead, coming from the southeast across Galilee, heading to some unknown place. When we visited the River Jordan, of John the Baptist fame, security was tighter than usual as U.S. Secretary of State Warren Christopher was apparently meeting some leader at a nearby location.

And so it went, at a peaceful time in Israel, an epicenter of three major world religions, January, 1996.

So, on today’s “judgement day”, the odds do not mitigate for a peaceful end for us, and particularly for Israel, and it will be humans refusing to deal with each other who will do ourselves in, if we can’t learn to cooperatively live together.