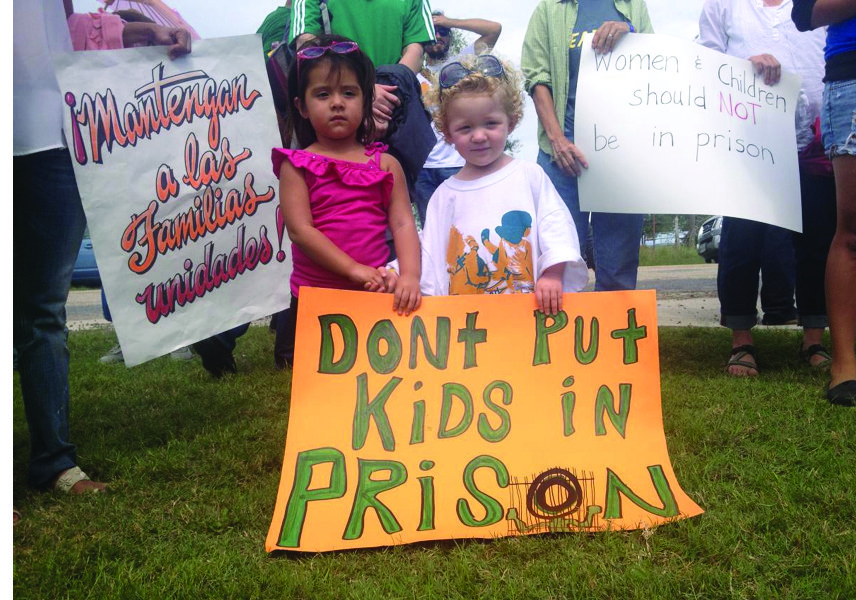 Today’s Twitter feed is abuzz with the news that the White House intends to announce administrative action for some of the nation’s estimated 11 million undocumented Americans. While the contours of the relief remain unclear, President Obama’s action undoubtedly moves the immigration reform debate to a new place and promises to make real – at least in a limited way for the very near future – the right to family unity guaranteed by the International Covenant on Civil and Political Rights at articles 17 and 23.

But as the administration moves to keep families together with one hand, the other hand is doubling down on the detention of families fleeing to the United States in search of asylum.

But just days before the planned announcement of administrative relief for undocumented Americans, the administration reiterated its commitment to the imprisonment of families seeking asylum by confirming it plans to open the massive Dilley, Texas family detention center before the end of the year.

“The Administration is playing more games with the lives of women and children fleeing violence. This time it’s a shell game moving people from one jail to another without regard for their well-being or human rights,” said Crystal Williams of the American Immigration Lawyers Association.

There’s a dire need for the president to take administrative action on immigration. The first step should be ending the detention of families in the United States.

In a call for action, The Advocates for Human Rights, along with a host of other organizations, signed the following letter to President Obama, urging him to address the detention and expedited deportation of children and their mothers fleeing violence in El Salvador, Honduras, and Guatemala.

We, the undersigned civil rights and civil liberties, human rights, faith, immigration, labor, criminal justice, legal, children’s rights, and domestic violence advocacy organizations, are gravely concerned about your administration’s massive expansion of detention for young children and their mothers who are fleeing extreme violence in El Salvador, Honduras and Guatemala. Though many of these children and their mothers qualify for asylum protection under U.S. law, they are being deported so rapidly as to deny them a fair opportunity to seek protection.

As you consider taking executive action to reform the immigration system, we urge you to address the fundamental problems with the detention and expedited deportation of these children and their mothers. Indeed, executive action can wait no longer. Delay has only meant more broken families, more workers stuck in the shadows, and more businesses that are stymied by the broken system. We urge you to act immediately to do what is within your legal authority to fix the immigration system and take bold and inclusive action to make our enforcement system more humane.

We applaud your goal of protecting immigrant families whose lives are interwoven into the fabric of American communities. For that same reason, we call upon you to stop detaining these vulnerable children and mothers who are fleeing violence in Central America and hoping to join with relatives already living in the United States. In 2009, abuse and mistreatment at a Texas facility compelled Immigration and Customs Enforcement to stop using the facility to detain families. Detention profoundly impacts the emotional and physical well-being of children. It inflicts unspeakable pain on mothers to watch their children suffer in detention. It forces them to give up hope. Most of the mothers currently in detention have relatives or sponsors in the United States willing to take them in and support them. They do not have to be–and should not be–in detention.

The evidence is undeniable that many of these children and their mothers, who have been raped, kidnapped, beaten or shot to near death, are refugees who qualify for protection under U.S. law. Extremely high percentages of these detained women and their children have been granted asylum by immigration judges or been found to have a credible fear of persecution by asylum officers. Domestic violence in these Central American countries has reached crisis proportions. A U.N. Special Rapporteur reported in July that violence against women in Honduras is “widespread and systematic” and that 95 percent of violent crimes against women go unpunished by the police or other law enforcement. In most cases however, the U.S. government continues to rush these children and families through an expedited process, and has deported many back into the hands of their abusers and the very danger from which they fled. They deserve better treatment by the United States.

We urge you to stop the dramatic expansion of family detention, including the building of an enormous new facility in Dilley, TX. Instead, we recommend you greatly expand the use of alternatives to detention, bonds and other methods that are far less costly for American taxpayers and are highly effective in ensuring court appearances. Moreover, the removal process must be made more fair and guarantee that families fleeing violence have meaningful access to asylum, including access to legal counsel.

We look forward to the reforms you will implement on immigration and ask that you properly address the needs of these families. Please contact Greg Chen, Director of Advocacy at American Immigration Lawyers Association, gchen@aila.org, 202/507-7615, with any questions or followup.

Michele Garnett McKenzie is The Advocates for Human Rights’ director of advocacy.