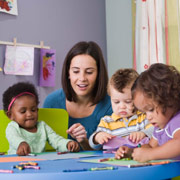 The Policy Notebook blog over at Education Week caught something interesting. In the latest “Education Blueprint” [PDF] from the Obama administration, there’s almost no mention of early childhood outside of the Early Learning Challenge grants awarded a few months ago. There’s plenty of detail on higher education, but not nearly as much as there used to be on early childhood.

I praised the last incarnation of the “Education Blueprint” for its focus on early childhood and its support for programs like the Northside Achievement Zone (NAZ) in Minneapolis that strive to provide cradle-to-career service for low-income children. To lose this focus is troubling, especially considering the outsize role the federal government continues to play in education policy.

I’ve complained before about the disproportionate influence the federal government has on education policy considering the relatively low share of school funding it provides (usually in the vicinity of 10 percent). The Bush-era No Child Left Behind (which has yet to be replaced as the dominant education law in the country) fed a destructive abuse of standardized test results well outside their original intent. The Obama administration’s Race to the Top grant program gave political cover to reformers pushing the next wave of test-based accountability measures and triggered a nationwide wave of state-level legislation.

Given this position as direction-setter, it is disappointing to see the federal government takes its eye off of early childhood programs. At this point, it’s well-established that high-quality early childhood programs are just about the best investment we can make when it comes to education, as they help shrink the achievement gap early and pay off in many other non-test-measured ways.

Amidst the current conservative budget-cutting mania, early childhood support has been cut in too many states. Minnesota bucked the trend by getting a little extra money in to support its quality ranking system for early childhood programs, but if we want to expand strong programs, we’ll need more money. It’s a shame that the federal government seems to have let its focus drift after tossing out the Early Learning Challenge grants. We need more than a one-shot infusion; early childhood needs to be part of our long-term agenda.