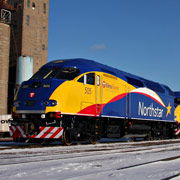 Commuter rail, long a mainstay in megacities such as New York and Chicago, has had a bumpy introduction in the Twin Cities that could discourage all kinds of transit development in these parts for decades to come. The 40-mile Northstar line from Big Lake to Minneapolis continues to shed riders since its 2009 debut, and now Metro Transit is cutting fares in an attempt to reverse the trend.

A lot of smart money says it won’t help. University of Minnesota transportation guru David Levinson says the project was doomed from the start because the northwest Minneapolis suburbs and exurbs it serves offer a poor market for rail transit. New commuter rail lines across the southwestern United States also have slashed fares but seen little or no ridership surges.

This doesn’t mean that all new rail transit is a rathole for taxpayer money. Light rail in dense urban areas has been a great success in the Twin Cities and elsewhere, exceeding ridership projections and halving the per-passenger public subsidies of buses. Commuter rail is a different animal, running on freight railroad tracks (in exchange for hefty payments to BNSF and other railways) and on limited morning and evening schedules tailored for downtown work trips.

Although operating costs are high in the absence of strong ridership, building commuter rail is a relative bargain: The Northstar cost about one-third of the Central Corridor light rail line for four times the length of track served. In addition, some commuter rail routes can share infrastructure and costs with upgraded intercity trains.

The Northstar was originally planned to extend another 40 miles beyond St. Cloud, but was trimmed back to meet Bush-era federal funding criteria. A complete Northstar would certainly draw more riders and link St. Cloud more closely with the Twin Cities, but it might not produce more overall bang for the buck.

New York and Chicago built their commuter rail webs before the auto age, when wealthy executives saw no shame in riding a train to work. Freeway gridlock has kept commuting by train a top choice in those places. Hwys. I-94 and 10 are pretty crowded in the Northstar corridor as well, but most commuters there have opted to keep fighting the traffic.

Maybe commuter rail isn’t a fit for Minnesota, except where it could piggyback on fast train service to Chicago or Duluth. But that’s no reason to give up on rail transit altogether. Our first light rail line, the Hiawatha, was a hit from day one. The Central, which opens in 2014 on probably the Twin Cities’ very best route for transit, will most likely far exceed the Hiawatha’s ridership. And the Southwest, now in preliminary planning with no funding guarantees, would link giant job centers in Minneapolis and its suburbs.

Not every business enterprise prospers. We shouldn’t count on 100 percent success for public investments, either. But we should be able to learn from our transit failures without tarring all rail projects with the same broad brush.