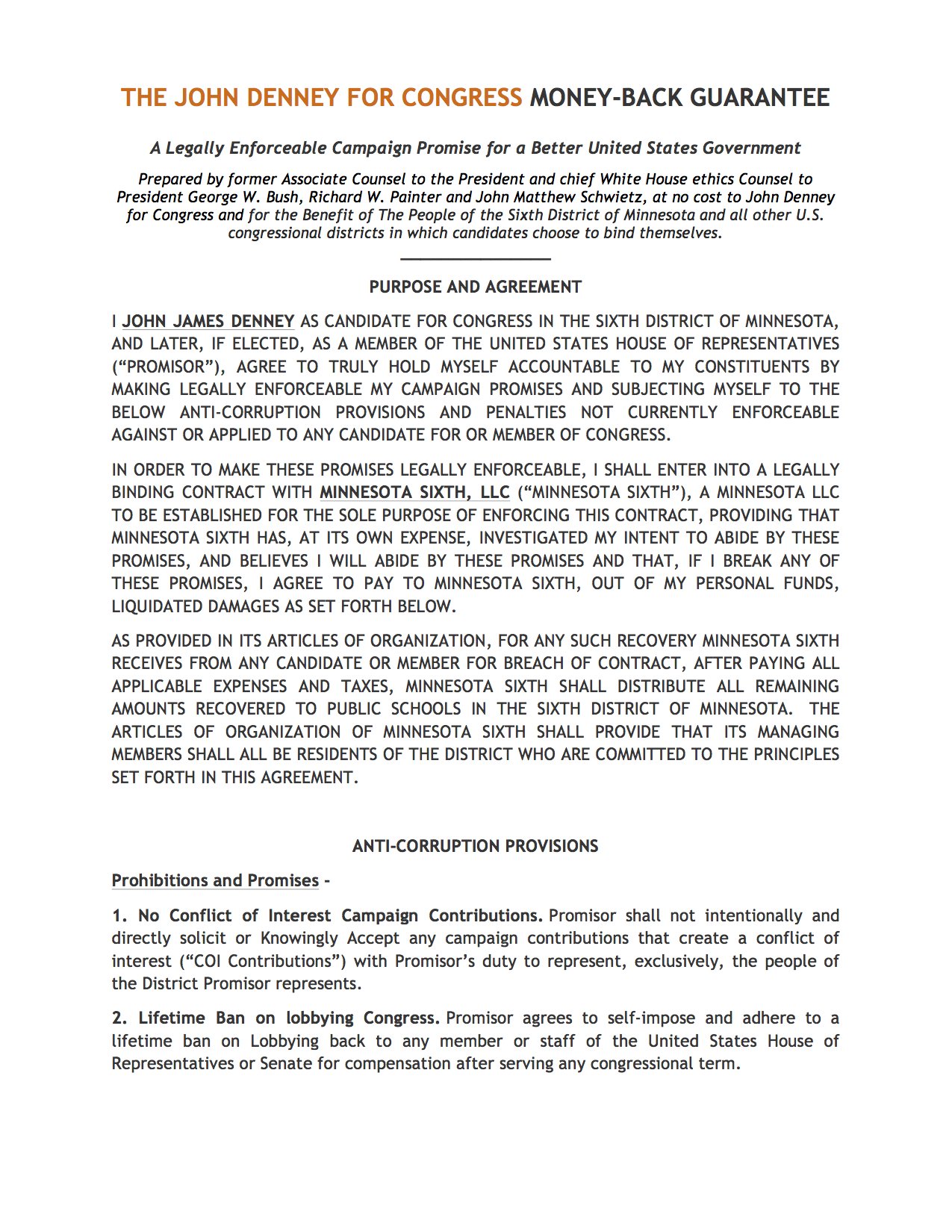 Before Election Day, voters must ask themselves why Tom Emmer and Joe Perske refuse to sign The John Denney for Congress Money-Back Guarantee.

My name is John Denney and I am the Independence Party candidate running for Congress in the Sixth District of Minnesota. Unlike my opponents, Tom Emmer (R) and Joe Perske (D), ethics are the centerpiece of my campaign and only I can offer Minnesota voters a Guarantee they cannot refuse. So, while I agree with Chris Brazelton that Mr. Perske presents a “viable alternative” to Mr. Emmer, I must say that settling for a “viable alternative” will not cut it. I am the best choice for Minnesota on election day, I guarantee it.

My top goal upon election is to earn an appointment to the House Ethics Committee. Gaining appointment to this Committee will be easy because it is the least sought after position in United States Congress. It should come as no surprise that in a House comprised exclusively of Republicans and Democrats, no one wants to work on ethics. So, the sad – nearly laughable – truth to be gleaned here is that these Parties are not interested in overseeing themselves.

Perhaps this is why Congress currently owns an 8 percent approval rating. Or, perhaps it is because Republicans and Democrats in Congress spend up to 70 percent of their time on the job, soliciting donations for their parties instead of working for the People who pay their salary. Voters are simply not getting their money’s worth from their representatives, and they know it. As your representative I will not spend one second raising campaign funds while taxpayers pay my salary. I will lead by example and work exclusively for the People.

I am the only candidate who has garnered meaningful, non-partisan endorsements from organizations committed to improving government ethics. I have earned the endorsement of both Represent.us and MAYDAY.US, organizations dedicated to ridding our government of the legalized bribery and corruption that my opponents and their parties partake in. MAYDAY.US was founded by Harvard Law School Professor Lawrence Lessig, who directs Harvard University’s Safra Center for Ethics and is on a widely-supported mission to “reclaim our democracy.” Professor Lessig recently blogged about my campaign remarking that it is “brilliant.” Since earning these endorsements, both Mr. Emmer and Mr. Perske have scoffed at the notion that anyone can effect real change in government ethics. While ethics and personal responsibility may serve as mere buzzwords for them, I believe these words do matter in this job. In fact, ethics might be the only thing that matters in politics.

My Legally-Binding Commitment to Changing the Face of American Politics

In case my goals and endorsements are not enough to convince Minnesota that I am committed to ethics, my entire campaign is founded on “The John Denney for Congress Money-Back Guarantee.” This Guarantee is the first of its kind in the history of the United States. It is a legally-binding ethics contract that requires me to abide by more stringent anti-corruption provisions than currently required of our government officials. This type of ethics contract was the brainchild of Professor Richard W. Painter, former White House chief ethics counsel to President George W. Bush. He and my legal counsel/campaign manager John Matthew Schwietz developed and drafted the contract so Minnesota could “elect campaign finance reform” rather than just hope for it. The contract includes two simple provisions that neither Mr. Perske nor Mr. Emmer will agree to: No bribes and no revolving door activity.

Under the contract, “no bribes” means I will only accept donations from human persons within the State of Minnesota. This is important because it guarantees that the only people I represent in Congress are the people who voted for me, not the people who paid me (i.e., PACs, Political Parties, Unions, and Corporations) as will be the case for Mr. Perske and Mr. Emmer.

The revolving door provision legally prohibits participation in the revolving door system in Washington. This provision is crucial to improving government ethics, as 79 percent of our former Members of Congress “cash out” to become lobbyists who then “lobby back” to their cronies on the Hill. In the absence of an ethics contract like the one I chose to sign, the current revolving door system will endure into perpetuity and continue to lure both wealthy individuals like Mr. Emmer or “common Joes” like Mr. Perske into a highly profitable system that feeds on corruption and silences the real voices of everyday Americans.

In the event that I breach my contract, the Sixth District will receive in return, my entire congressional and lobbying salary. This is why I call it my “Money-Back Guarantee.” That is, if I do not keep my promise, voters get their money back. The ultimate benefit here is that when Minnesota sends me to Washington, they are guaranteed that I will represent no other interests than the interests of the people of the Sixth District.

Tom Emmer Does Not Set the Ethics Bar, I Do.

For the above reasons, when it comes to ethics, Tom Emmer does not set the bar, I do. Therefore, a “viable alternative” to Tom Emmer will not cut it. The standard to which I chose to hold myself to is the least we should expect of all our politicians. I have set the bar and I have called on Mr. Emmer or Mr. Perske to follow suit. However, Mr. Emmer and Mr. Perske have chosen to ignore my call to action and apparently feel that voters prefer empty promises from establishment politicians over a money-back guarantee . On Election Day, Minnesota can no longer wait for the politicians who benefit from the current system to change it. We must elect the solution, which is exactly what I offer.

So, please remember, remember on the Fourth of November, do not waste your vote, vote your conscience. I would be honored to serve you.