Judge William Price bragged about the new, “at least 3 star”, jail that Polk County, Iowa runs. He smiles and exchanges pleasantries with us and our lawyers as the deputies are collecting the paperwork to haul us off to his self-described plush accommodations. Obviously he has never entered as a “paying customer”! I’d love to see if he has the cojones to spend 2-3 days inside, incognito, before he sends anyone else to that jail. Same for the Prosecutor (although, in fairness, he only recommended a fine for our conviction on trespass) as well as all the COs (Corrections Officers) and staff at Polk County’s “finest”.

I write about my jail experience to demystify it, hoping to embolden others to consider civil disobedience and jail witness as another tool in their repertoire of working for peace and justice.

This is part two in a two-part series. Read part one, ‘Going to jail as solidarity.’

After 20 hours in the “cooler” (I understand more clearly the street slang for prison/jail after my first frigid stops within the jail), I was handcuffed and chained again to be moved to “BarneyLand”, the euphemism given to another holding way-station in the jail before entering general population (referred to as a “pod”). The name came from its early days when the TV there only played PBS and because of the prevalence of cartoon character shows like the purple dinosaur, Barney, the name stuck; even the guards use it. It has 2-person cells on the upper level and more on the lower level which also includes 3-4 single person cells. My cell had a rolled steel bunk with mattresses on each bed with a built-in pillow device – a great improvement from laying directly on cement! Don’t get too excited – its not a posturepedic or any other chiropractic-approved bedding! The toilet and sink are separate and porcelain. A stainless steel 18”x18” shelf serves as a desk/table with a stool bolted in front. A stainless steel “mirror” completes the ensemble. The cell door has a clear window so I can see the clock outside the COs station, located between two identical “BarneyLand” units.

I am assigned a lower bunk (hallelujah!) and after unpacking the “bedroll” I received before entering the unit, I begin to arrange my new residence by placing my nearly threadbare sheets and blanket on the mattress. I also now possess a towel, washcloth, a plastic cup and a spork. I had asked the night before and again for a Bible but I am told “you have to wait until you get to a pod before you can have one.” After being told by others that you could be in BarneyLand for up to 24 hours, I figured I’d probably remain there to finish my sentence. Of course not. After getting close to 2 hours of needed rest on my bunk (since we were locked in the cells), the CO yells to us, calling us by last name to “come down and get your uniforms – you are going to a pod tonight after dinner.”

I am issued 2 sets of two-toned green pants and shirts, another T-shirt and boxers, and another pair of socks. We are told to change out of the orange jumpsuit and return it to the laundry workers who gave us the clothes. We are again unlocked to come to the main level for dinner to eat at the stainless steel tables and stools bolted to the floor. A ham bologna slice with bread is complemented with cooked carrots, Frito-like corn chips, canned pineapple, blueberry pie, and milk – served on the same molded plastic trays.

By 6:30 we are assembled again, re-handcuffed and chained for the march to our respective pods. I’m assigned to a lower bunk, 630, in North 6. It holds about 60 inmates in 4-man, 2-bunk bays on two levels. Each bay has 3 walls with the front completely open, facing the day room. At the end of the bays on both levels are 4 toilets and 4 sinks on each level. Opposite the bay area are showers and a TV room with hard plastic chairs designed to look like cushioned, living-room-type chairs. The CO has his desk on that wall opposite the bays directly in the middle. In the day area are both phones for expensive calls and video screens for visits. I wasn’t there long enough to see how they work but with others milling about, it didn’t seem to afford any privacy except over the handset.

After I made up my bunk, I took a stroll around to see my new digs. Four guys sitting together at one table ask if I’m in for DWI. Another laughs and said, “I recognize you” and points to a picture of the hefty banker with a mustache on the Monopoly Board Game. When I tell them about drones, only two of the four have ever heard of them and they didn’t see them as a necessary problem. As I explain about my friends in Afghanistan and my friend in Pakistan and their experiences, you can see a light go on in their imagination. When I tell them I chose to go to jail instead of paying the $100 fine (I put it, “I chose to do the time instead of paying the fine”), they each gave me a fist bump and said, “Alright!”

In traversing the pod, I see one guy open a cabinet door and start rifling through paperback books. When he is done, I quickly check to see if there is anything I’d like to read since I’m sure I won’t sleep soundly on my steel bunk – even with a mattress. I find a copy of Tim O’Brien’s The Things They Carried and even though I read it years ago, it is well worth and read. Christine and I had just seen a play at the History Theater based on it a month or two ago.

One guy approaches me and offers some instant coffee – a generous offer here since coffee is only available from the commissary in a cost-cutting effort by the jail. I’ve never been to a jail or prison where coffee hasn’t been a staple of the inmate diet! Other ways of taking it out on the vulnerable are evident with the posted notice that any visit to the nurse will incur a charge of $5, to the Doctor $10, Mental Health visit $10, as well as charges for any prescriptions. The big surprise awaits check-out time.

They say necessity is the mother of invention. I was pleased to see the guys had rolled one of the large Brute trash receptacles right in front of the toilet closest to the COs desk. If you need to take a dump, roll the trash can between you and anyone walking by; at least a modicum of privacy. If you want more, wait until after lights out at 10:30 PM and before 5-5:30 AM when they are back on for breakfast. At night only lights at both far ends of the pod are lit. Or, after breakfast and cleanup, most of the guys go back to sleep for several hours so there is less traffic by the toilets. 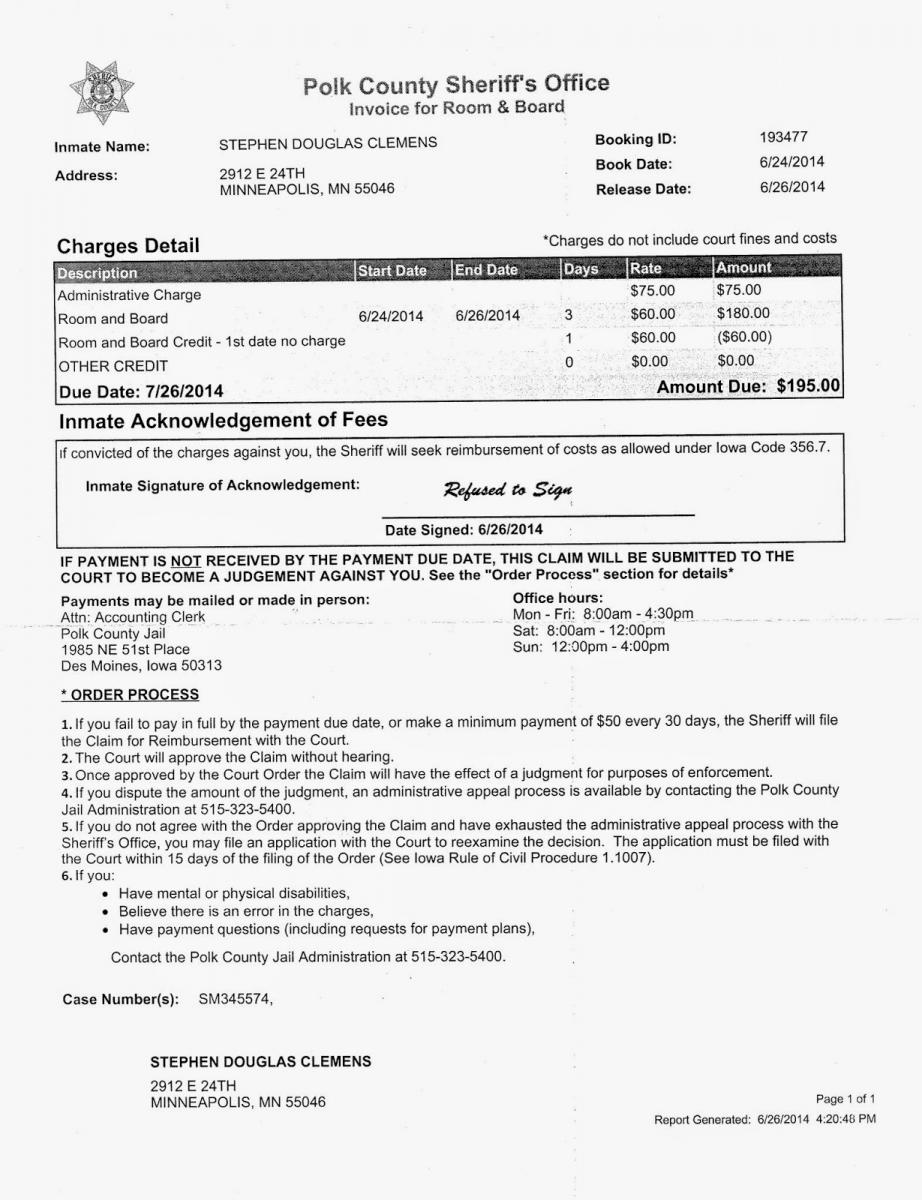 There are no windows to the outside in the entire prison except two louvered ones about 15’ high on the outside wall of an enclosed rec room. The room itself consists of cement block walls, several Plexiglas windows on the side facing the CO desk, and a cement floor. Some guys use the area for walking exercise but unless you buy some shoes at commissary, walking in the shower shoes is not the best experience. The windows in our rec room are obscured, one louver open in a way you can tell if it is daytime or night but not the weather. But Mother Nature has its own way: early in the morning a loud boom of thunder erupted and I could hear the driving rain. Later in the early afternoon, the thunderstorms returned during time for commissary and a nearby lightning strike darkened the entire prison for about 5 seconds. Several inmates yelled, “jail break!” and the two women distributing commissary got up to run out of the pod – reacting much quicker than the CO. We laughed when the lights came back on as they sighed with relief. With only the two obscured windows at the end of the pod, it was very dark!

Although the Judge’s order stated I was to be jailed from 4 PM until 4 PM two days later, 4 o’clock came and went. I had all my stuff packed, ready to go since 3, thinking I should walk out the door in my street clothes at 4 and it would take some time to check out of this bed and breakfast. Finally, as the clock ticked on, at 4:08 the phone rang and the CO yelled out, “Clemens”. He patted me down and took me to the pod door where I was once again handcuffed and chained for the march back to the release area. We stopped en route for Eddie to join me and then had to sign to get our property and clothes back. We put on our street clothes and then Michele and Ruth arrived as well. I was asked to sign a form which acknowledged I received my invoice for room and board charges – $195! I told them there was no way I was going to pay such an absurd bill and I’d refuse to sign it. They said, “We’ll bill you anyway.” So, go figure – go to jail for two days because you won’t pay a $100 fine for reason of conscience only to be issued a bill for $95 more than that amount to undergo such indignities.

What do you expect from an empire in the throes of decline and desperation?