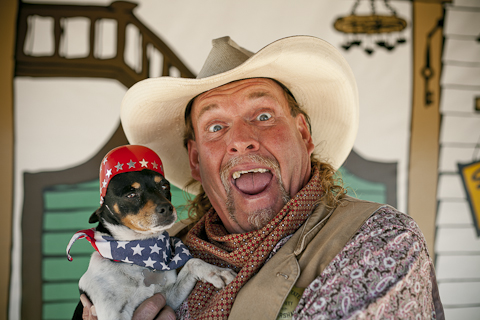 The Minnesota State Fair’s Doggies of the Wild West is brought to audiences in HD: “Hound Dog Definition,” said Old West Marshal “Rowdy Yo,” or Gary Noel when he isn’t overseeing his rescue dog show.

Tucked into a corner east of Heritage Square, the Doggies of the Wild West have become a hit with fairgoers, packing three daily shows with standing room only. A western-themed comedy show, it stars eight dogs high on the cute factor scale.

“Watch out, here comes the pup-a-razzi,” he tells the eight-leashed dogs when a crowd gathers to take backstage photos. Noel, 53, is a second-generation dog trainer and has been in the business for 32 years.

The dogs performing on stage at the Dog House Saloon are chihuahuas or rat terriers that Noel rescued from shelters, humane societies, or unwanted homes. His toughest case, he said, was four-year-old Patches, a chihuahua/rat terrier/dachshund mix found wandering around a parking lot at the San Antonio Stock Show and Rodeo.

“We checked around and nobody knew anything about him,” said Noel. “He was very badly abused and very aggressive. He was scared to death of everything. In six months, I turned him around and he turned out to be the best dog in my show. I like to give dogs a second chance. With time, patience and tender loving care, you can do the same thing with your dogs at home.

Some dogs have made names for themselves, with appearances on the David Letterman Show and The Tonight Show starring Jay Leno. Tiny pup Puddles has performed 12 times on the Animal Planet and can stand in Noel’s hand on one paw, no easy task for a dog. “Let’s see your German Shepard try that one,” he tells spectators.

The newest member of the act is two-pound, one-year old chihuahua Pistol Peanut. Belle Star is a chihuahua from “Howl-lywood California.” The dogs have a Facebook page that fans can “like.”

Noel’s “silly sidekick” partner is “Calamity Jo” whose off-stage name is Giovanna Cardella, a former teacher. They have trained Puddles to stand perfectly still on Cardella’s head. “Sometimes people say to us ‘we have this dog and we can’t handle it,’ and sometimes we take it and we’ll take care of it and see if it can be a show dog. If not, we find it a home,” she said. 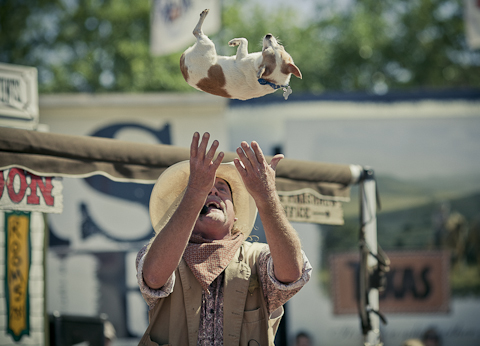 This is Doggies of the Wild West’s debut appearance at the Minnesota State Fair. Noel, who travels the country with his act, was attending the International Associaiton of Fairs and Expositions’ annual convention in Las Vegas last year and was invited by the State Fair to bring his act here.

When off the fair circuit, Noel and Cardella reside in Mesa, Arizona, traveling over 300 days a year. “We were in California in June, then we jumped all the way to Oskaloosa, Iowa, then we went to Indiana, then to Wyoming, back to Wisconsin, then here. From Minnesota we go to North Carolina,” said Cardella.

The dogs reside in a trailer with air conditioning when not riding their stagecoach. “It’s a great fair. I love it, a lot of nice people,” said Noel. 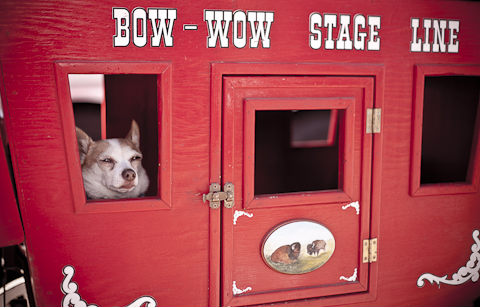 (Above) A member of the Doggies of the Wild West relaxes before going on stage at the Dog House Saloon. (Photos: Jeff Rutherford) 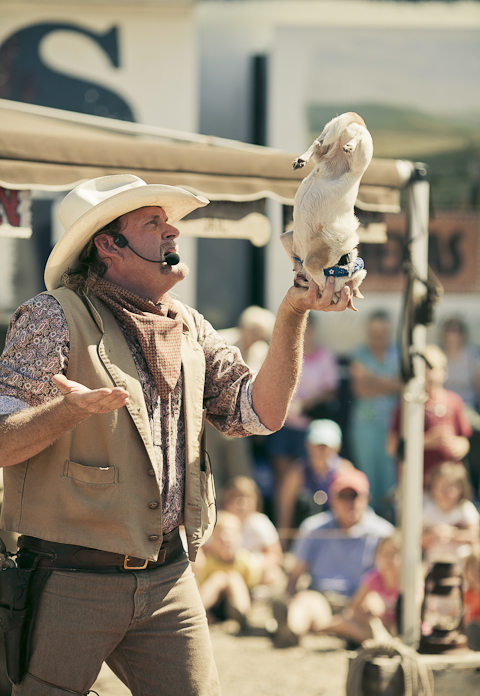 (Above) Gary Noel and Patches. 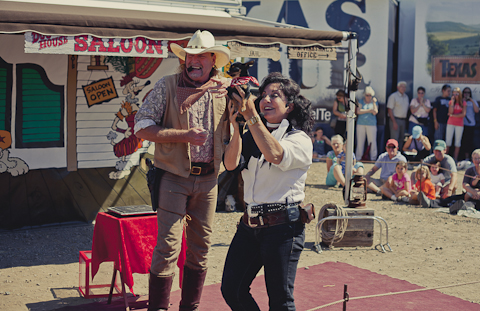 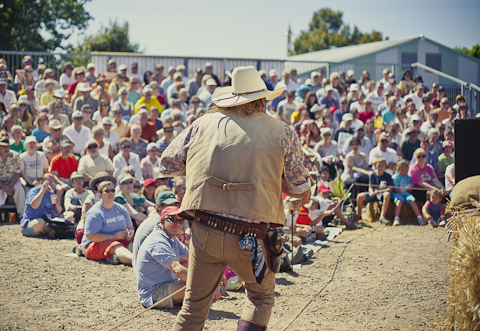 The Doggies of the Wild West has become a popular act at the State Fair. 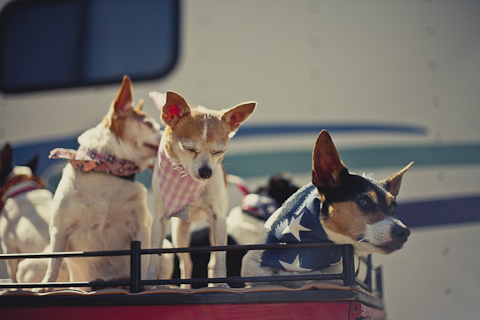 (Above) The dogs of the show are all rescue animals. 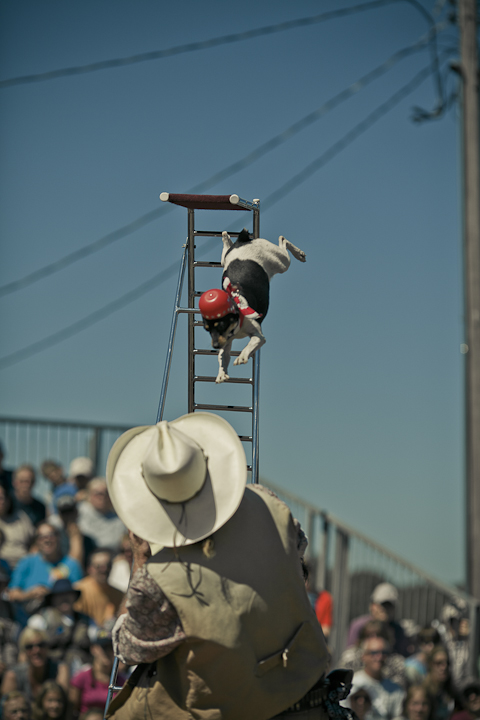 (Above) Belle Star jumps off a ladder. 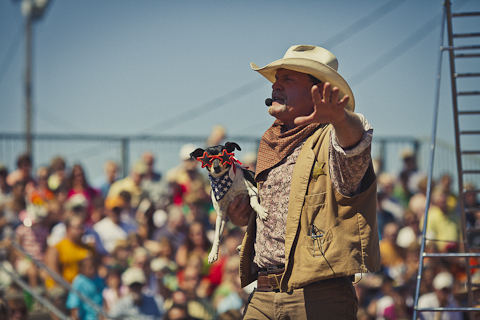 (Above) Belle Star and Noel. 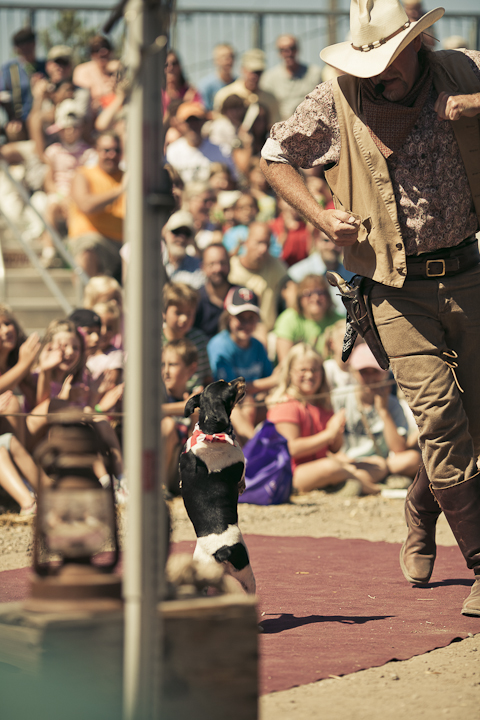 (Above) Dancing with Marshal “Rowdy Yo.” 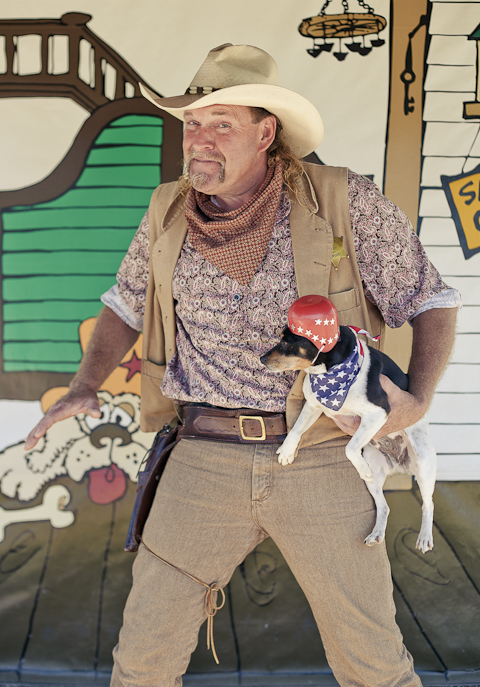 (Above) Noel makes sure Belle Star wears a helmet before jumping from the ladder. 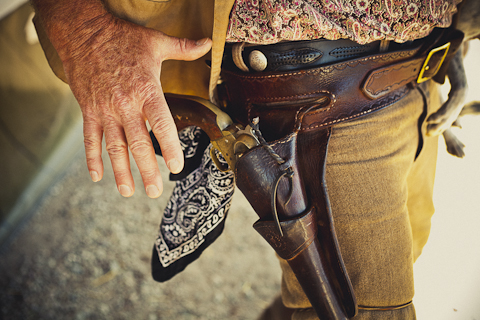 (Above) Dog paws and an imitation handgun get ready for Doggies of the Wild West show near the Heritage Square.