Photo from The Uptake.

UPDATED 7:45 p.m., 2/27/2012 — With DFLers in the legislature united in opposition to Republican plans for a constitutional amendment to require voter IDs, Secretary of State Mark Ritchie has jumped into the battle with a plan of his own. Ritchie says his plan for electronic poll books satisfies the Republicans’ call for voter IDs, without suppressing voter participation or disenfranchising anyone.

Solution in search of a problem

The exact provisions of the Republican plan are far from clear, since Republicans are pushing slightly different proposals in the Minnesota House and Senate. What is clear, according to opponents ranging from the League of Women Voters to the AARP, is that the proposals for a Voter ID amendment would result in voter disenfranchisement. Opponents of the Republican proposals also call them “a solution in search of a problem,” insisting that Minnesota does not have a voter fraud problem. In fact, the very few illegal voting charges that have been brought recently focus primarily on felons voting — which the voter ID would do nothing to stop.

Voter ID opponents see the push for an amendment as a move targeting young people, old people, poor people, and ethnic minorities. The Minnesota League of Women Voters points out that, “Approximately 11% of the voting population does not carry a photo ID that meets these rigid requirements. The percentage is higher among certain groups: the elderly (18%), younger adults (18%), minorities (25% of African-Americans) and people who are low-income (15%).” 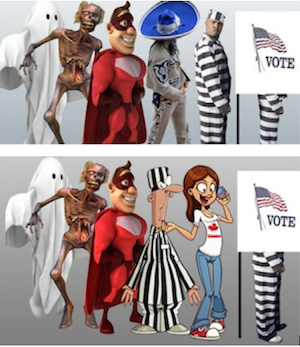 In a series of press conferences and public statements last week, opponents of the amendment pointed to a Minnesota Majority-linked website banner featuring a black felon sneaking into the voting booth and a man in a sombrero standing in line as evidence of racial prejudice on the part of the amendment’s backers. The Minnesota Majority said there was no racism, and substituted a cartoon that changed the guy in the striped prison garb from black to white and replaced the guy with the sombrero with a woman with a maple leaf on her shirt, adding a tag line “politically correct version for the hypersensitive.”  The prominence of “criminal” images remains, though the voter ID amendment would do nothing about the issue of voting by persons who are disqualified as felons.

Where is the amendment coming from?

Voter ID laws have been popping up all over the country, as they are part of the conservative ALEC (American Legislative Exchange Council) agenda. The laws have been shot down by the feds in South Carolina and are the subjects of litigation in several other states.

Minnesota Republicans passed a voter ID bill in the last session of the legislature, only to see it vetoed by Governor Mark Dayton. Dayton said the bill was unnecessary, an unfunded mandate for local government, and would violate the federal Military and Overseas Voter Empowerment Act. Since they can’t get the governor to sign on, Republican legislators have set their sights on passing voter ID as a constitutional amendment, which would go directly to voters in November.

Ritchie said in an interview that the Republican amendment proposals would run afoul of federal voting rights legislation, including the 1993 “Motor Voter” law and the 2009 Military and Overseas Voting Empowerment (MOVE) law.

According to Ritchie, he has a proposal that will get photo identification of voters and will be both better and cheaper than the Republican proposals. He has proposed electronic poll books, a system of adding voter photos to the traditional voter lists used at every polling place.  Instead of voters producing photo ID cards, polling places would have photos already in place for every voter with a Minnesota driver’s license or state ID. Since the MN Department of Motor Vehicles maintains records for at least 12 years, said Ritchie, there are photos available even for many senior citizens who no longer have drivers’ licenses and haven’t bothered getting state identification cards.

What about voters who don’t have a photo on file with the state or who want to register on election day? No problem, according to Ritchie. Poll workers can snap digital photos on the spot, for inclusion in the poll book.

Precincts or townships with a low number of voters might have a paper poll book, just as they do now, but with photos generated from state records and printed in it. Larger precincts would have one or more electronic poll books.

His proposal, said Ritchie, is “so low-cost, it’s amazing.” Moreover, it would mean “zero disenfranchisement, zero delay in reporting voting results, zero disruption for overseas military voting and absentee voters and township voters, and it puts a new tool in the hands of local election officials when they are being asked to do more and more with less and less.”

Because same-day registration is preserved, there would be no problems with federal voter protection laws. The electronic poll book system would also help the voters who don’t have a photo ID to bring to the polls. These voters, according to Ritchie, include, on a typical election day, “20-40,000 people who have lost or had their wallets stolen, where they have lost their id but haven’t gotten a duplicate yet … [and] 84,000 voters, many of whom are senior citizens, who do not have any ID.”

Electronic poll books offer other advantages:  They could be up and running in a very short time – as soon as this year, if the legislature passed the law and appropriated the necessary funds. They would not delay the outcome of an election, sometimes for days at a time, with decisions on provisional ballots, as would be the case under some of amendment proposals.

Who’s for it, who’s against it?

Testifying in a Senate hearing on February 17, Ritchie said his proposal is an alternative to the amendment approach that would eliminate any threat of voter suppression.

As of February 27, there was no electronic poll book proposal before either house of the Minnesota legislature, but Senator John Howe (R-Red Wing) said in a telephone interview that he is working out the language for a bill incorporating electronic poll books, which will be co-sponsored by Representative Mike Benson (R-Rochester). Howe said he hoped his bill would gain bi-partisan support.

Senator Terri Bonoff (D-Minnetonka) said she is “quite supportive,” and hopes to sign on as a co-sponsor when the legislation is introduced.

Representative Phyllis Kahn (D-Minneapolis) said the electronic poll book is “absolutely fabulous.” It’s a “system-friendly, voter-friendly, inexpensive way to deal with this.” She wants to be sure that the proposal can deal with people who move frequently, and have to change their registration because of a move. On balance, though, she’s impressed by the lower cost and thinks the electronic poll book “looks like a more sensible thing to do than the proposal we’ve looked at before – Representative Kiffmeyer’s proposal.”

Senator John Marty (D-Roseville) was less enthusiastic, saying that there’s really no need for any legislation, given how little voter fraud there is in Minnesota. But, he said, he’d prefer the Ritchie solution because it would not disenfranchise anyone and it would cost “a whole lot less.”

Secretary of State Mark Ritchie said that the electronic poll book could be adopted on a bipartisan basis – “the way Minnesota has always done it.”