“But where are you really from?”

“Do you want to join our diversity committee?”

These are just some of the remarks people of color hear on a regular basis, and women in particular bear the extra weight deflecting comments that fetishize and criticize their appearances. While the reactions of Black and Brown women are often dismissed as them being fiery and combative, Asian and Asian American women are stereotyped as either the quiet submissive “Lotus Blossom” or the aggressive “Dragon Lady.” This dichotomy allows for no gray area, and deprives Asian women access to the full spectrum of what it means to be human.

For performance artist and comedian May Lee-Yang, that deprivation was dehumanizing. She didn’t like seeing how one slick comment could instantly steal someone’s power or render them defenseless. If there was a way to help bolster assertiveness in Asian women placed in these predicaments, and by using humor, Lee-Yang thought she could help.

Lee-Yang along with Saymoukda Vongsay and Naomi Ko — founders of the Funny Asian Women’s Kollective (FAWK) — started building the idea for a series of workshops to help Asian women work on their comebacks. They titled the series, “Clapback.”

“I like the tone of it because it feels very casual but it also feels very real,” Lee-Yang said.

At the pilot workshops, dinner was served first followed by a warm-up led by theater and improv artist Heather Meyer. The aim was to “get people to have fun, let loose, try storytelling, yell really loudly and not be scared of that kind of stuff,” Lee-Yang said. Once the room was prepped, Lee-Yang, Vongsay and Ko introduced the topic, inviting attendees to write down microaggressions they have experienced. Lee-Yang started the conversation by sharing some of her own examples and then opened the room up for folks to practice responding to a list of microaggressions with each other.

“Essentially we get people hyped up and building community and letting loose. And then we let people practice — getting two partners and taking turns — picking stuff up like ‘don’t your people eat dogs?’” Lee-Yang explained.

Practicing in a setting surrounded by peers who have lived through many of the same microaggressions provides not only a safe environment to test out comebacks, but also gives the women a positive, empowering example to think back upon when the same old microaggressions crop up in the real world.

“Confronting, speaking back, standing up for yourself, advocate for yourself,” Lee-Yang said of her goal. There may be only one Ali Wong or Margaret Cho, but at least the rest of us can practice being quicker on our feet. 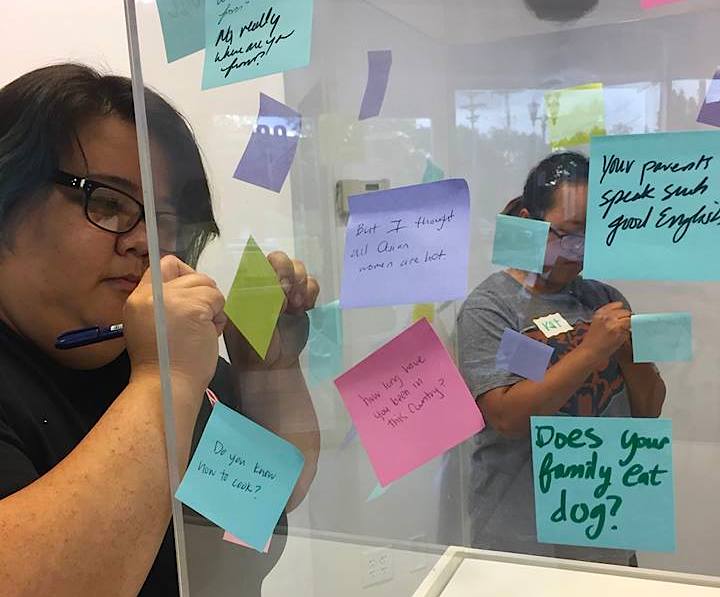 Workshop participants write down some of the common microaggressions they face. Photo courtesy of FAWK.

Though the Clapback workshops use comedy to combat racism on a personal level, humor can be an important tool in social justice work on a larger level. Anh Thư Pham has been organizing since 1991 on issues surrounding race, anti-war efforts, women’s rights and LGBTQ rights. With her brightly colored hair and dry wit, Pham sees a purpose to a bit of levity in the midst of a demonstration.

“When I’ve been at protests and events where people have added aspects of art and humor, that was where it helped make those of us who were part of the demonstration feel safer…because I come from a community who is marginalized,” Pham said. “When you’re a woman, when you’re a person of color, when you identify as LGBTQ, a lot of times you’re in these protest spaces where the target is you.”

“When you add humor to elements of the protest it doesn’t mean that we’re not taking it seriously, but it does help to diffuse hurt, it helps to diffuse anger, and it helps to add joy to what we do,” Pham said.

Like the women of FAWK, Pham finds the addition of art and humor to be humanizing. She notes how this is not only beneficial to individuals participating in a protest, as they get to be fully human, but that it helps to further their cause. She said that those who oppose her and organizers and activists like her “don’t see us as human beings and don’t want to get to know us. So if we present ourselves as only the ‘anti-this or anti-that,’ then we’re not presenting our whole selves. That’s why to me it is so important to add culture and our identities to who we are and how we protest.”

Rasha Ahmad Sharif takes a similar tack with her work through the Minnesota chapter of the Service Employees International Union (SEIU). She organizes primarily through one-on-one conversations with low-wage workers. For Ahmad Sharif, laughter grounds her conversations. “It makes it even more human…I definitely put all of my personality into organizing,” said Ahmad Sharif.

Pham reflected on her family, many of whom carry significantly different political views than she does. Despite their disagreements, they are able to talk about everything.

“For me it always feels more comfortable to use humor to diffuse a situation,” she said. “It might not make somebody’s mind change the first time around, but having these conversations — instead of it being these heated, horrible ‘I hate you’ shouting conversations — [feels more productive]. I have seen with my own family when we have these conversations where we don’t agree on [something] … instead of dealing with defensiveness, trying to find humor and trying to find common ground, I feel like at least people are more willing to hear and learn over a period of time.”

“You also have to temper it with actual information,” Pham said, “if you don’t have any substance then people aren’t going to be here for it because these are real lives and real instances.”

Ahmad Sharif agrees that using humor as a tool to process and move through pain can be effective. But she says the first step is to acknowledge that violence happened at all and that its not-so-micro impact is nothing to laugh at. “They are aggressions, period,” she said. And sometimes she resorts to fighting fire with fire.

“I’m pretty confrontational so it’s going to come down to intimidation. I don’t care about not being tolerant,” Ahmad Sharif said. “I think it sometimes hurts me [that] most of the time I am hostile. My response is sarcastic, sometimes, but belittling.” She said she is open to addressing the aggressions she faces differently in the future, for her own health and self-preservation.

“I’ve been working on my approach, to be loving, because it’s hurting me. Because festering that hurt and just sitting on it, or trying to forget it, for me is a huge deal,” she said.

As light as making jokes can feel, Ahmad Sharif knows that learning this approach will take time. “It’s a process. It’s going to take years and years and years of practice. It takes practice, just like anything else,” she said.

For both Ahmad Sharif and Pham that’s where FAWK’s Clapback workshops come in handy. By providing a space for Asian women to practice responding to racism with humor, they also prepare the participants to engage with people in ways that fully protect their wholeness.

“Comedy and art allow us to get ‘there’ faster, because we see each other’s humanity,” Lee-Yang said.

The Clapback workshops are just a single component of FAWK. In the future, Lee-Yang, Vongsay and Ko will also present a monthly cabaret series, which they hope will eventually feature some of the artists who participate in the workshops. For those who participate without any sort of dream of performing, Lee-Yang hopes the workshops will empower them by building confidence, building community, creating an experience with art and giving them a tool to help combat the racism (and any other aggressions) they experience.