Minnesota’s health care spending growth rate has declined, according to a Minnesota Department of Heath report. Don’t get too excited. While this would indicate positive news, there are a number of potentially troubling reasons for the declining rate.

First, a decline in the rate of spending growth is not a decline in spending. A graph from the report shows that while the growth rate has dropped to 2.2% per year, the total amount increased from $36.8 billion in 2009 to $37.7 billion in 2010. 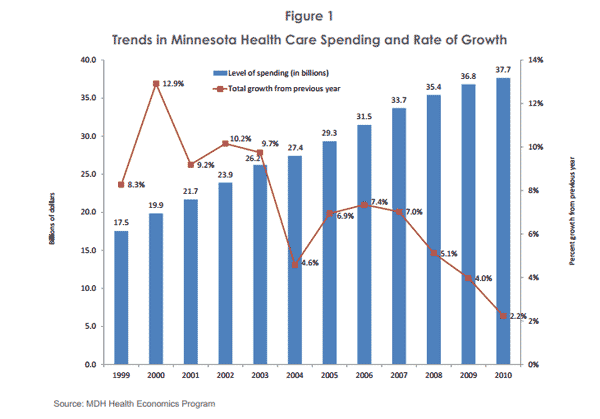 Also, the recession could be influencing the numbers. State Health Economist Stefan Gildemeister told MPR, “People experienced flat income or declining incomes, which also likely affected how they decided to spend it.” Also, he points out increased cost sharing may be causing patients to seek less medical care.

It will be interesting to see what happens in future years, which might help us determine if the declining spending on health care was the result of a more efficient system of delivering and paying for care or the result of consumers cutting back on care, which could be bad news if they are forgoing needed care.

A 2009 survey by the American Academy of Family Physicians seems to indicate that they are. As the graph below shows, doctors observed increases in many distressing behaviors. 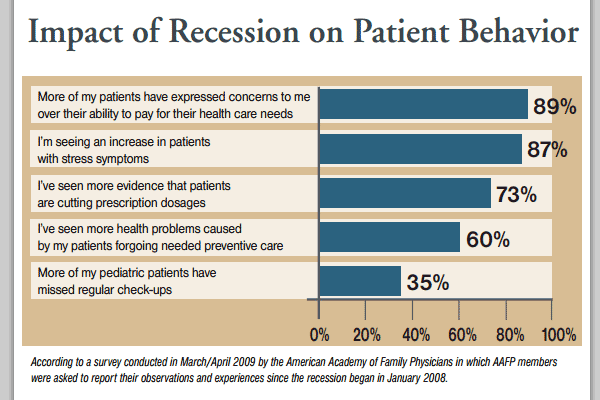 We want health care costs to decline, but we want it to decline for the right reasons. The best way to do that is to approach the system holistically and enact a series of reforms that target not only lower costs, but also increase quality and access to care.