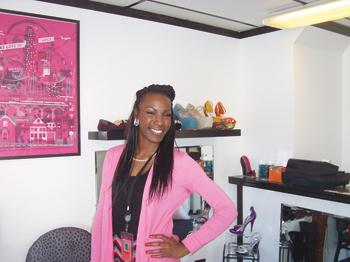 Tashawna Williams is owner of Divas In Motion. (Photos by Jamal Denman)

Divas in Motion is a small, intimate boutique located on the corner of 60th Street and Nicollet Avenue in South Minneapolis. It specializes in offering unique, one-of-a-kind women’s footwear that is not likely to be found anywhere else in the state.

Divas in Motion offers limited quantities of fashionable flats, heels, wedges and boots, as well as a warm and friendly atmosphere for every customer they serve.The concept for Divas in Motion came from 29-year-old owner and entrepreneur Tashawna Williams. Williams earned a B.A. in psychology from the University of Wisconsin Whitewater, where she also played basketball and became a member of Delta Sigma Theta Sorority.

The Minneapolis native — who is also the youngest of five siblings — returned to her hometown and became a teacher and mentor. Although she liked the fact that she was teaching and working with youth, Williams still felt like something was missing in her professional life.

“I want to be happy in life, and I just didn’t want to be stuck in doing something that I just went to school for because I was interested in it,” she explains. It was her interest, that eventually grew into a love of fashion, that steered Williams towards the business of selling shoes.

“I started the business with my best friend. We both had a shoe fetish.” Differing opinions on the direction the business should take led to a split in the partnership. Yet Williams continued on. In 2010, Williams sold shoes at various events and out of the trunk of her car before she saved up enough of her own money to secure a storefront in October 2012. 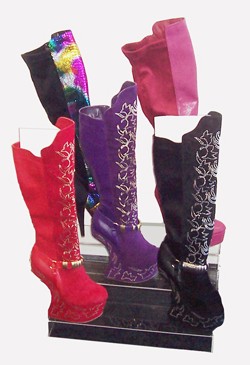 Williams believes that fashion involves more than just picking out an outfit to wear, saying that “fashion is a cultural movement… That’s how we shop for shoes. You want to fit the style of your customer.”

She also has started a nonprofit called Our Fascinating Selves, so she can tie in her business with working with the community. Williams partners with community organizations that have a positive impact on the community, such as the AIDS awareness event she worked on with the HERS Center — the first Black-nurse-practitioner-owned clinic in North Minneapolis.

And even though it is only Williams, her mother and a longtime friend handling all of the day-to-day duties at Divas in Motion, she still finds time to continue to mentor young girls. She feels it is important to be a positive role model so “young African American girls can have someone to look up to as well as know that you can be a product of your environment without showing that you’re a product in your environment… I’m from the North Side [of Minneapolis], but you don’t necessarily have to [represent] the negativity that people display out of our city; you can always turn it into a positive.”

Divas in Motion caters to women of all ages and focuses on bringing a fresh style to Minneapolis. “Our main focus is [offering] brands and styles the Midwest isn’t really aware of. I try to step outside the box when we purchase our shoes just so it won’t be a million girls walking around [with the same style of] shoes.”

Divas in Motion makes a serious effort to stay exclusive by ordering very limited numbers of one style and color of shoe, as well as getting the shoes in stock much earlier than other shoe stores in the state. Williams stakes out the competition to make sure her inventory is unique.

She spends a lot of time online and traveling to fashion hot spots such as Los Angeles to research future fashion trends. She also listens to feedback she gets from her current clients to get ideas on what types of styles to stock.

Most of her current clientele is comprised of repeat customers that have been buying shoes from her since she was selling them out of the trunk of her car. Many of the new customers come from word of mouth, promotions she does through social media, and networking through events such as Sister Spokesman.

Williams is looking to expand her customer base by hosting and sponsoring various events and hosting “shoe parties” where current customers invite friends and family and receive a percentage of the profits from each pair of shoes sold.

Williams also plans on bringing youth interested in business into the retail setting to teach them about the various aspects of business and give them real-time experience.

“A lot of people in Minneapolis aren’t determined to chase their dreams, and that’s the message I want to send. No matter what, just get out there and do it,” says Williams.

Divas in Motion is open Monday through Friday from 10 am to 5pm, Saturday from noon to 6 pm, and Sunday by appointment only. For more information, call 763-913-7615, email DivasinMotionMpls@gmail.com, or go to their Facebook page at Divas In Motion.