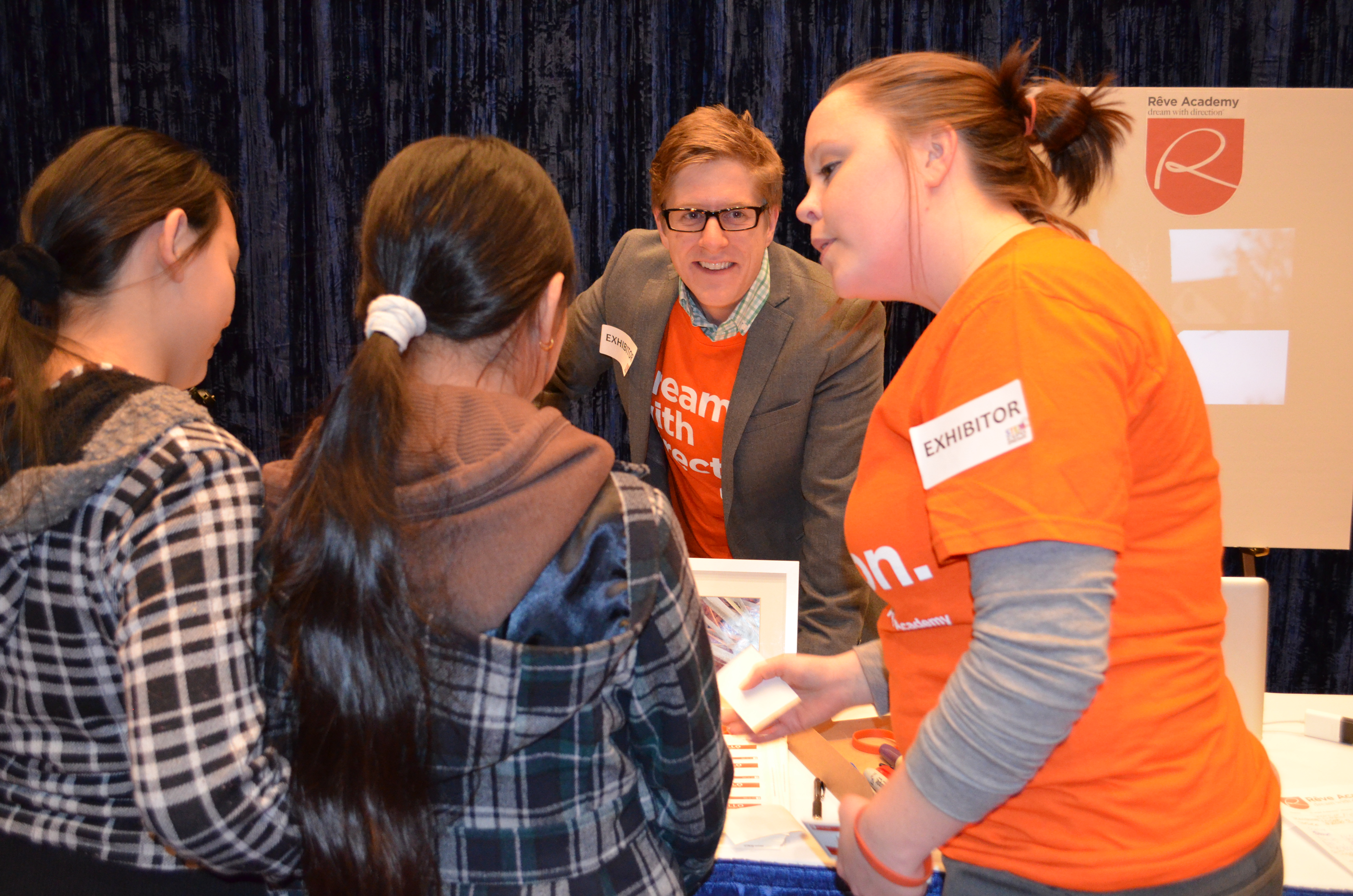 “My dream is to be a singer,” said one Susan B. Anthony Middle School student. Another student wrote that he wanted to be a doctor, while one girl told me she hoped to open her own business.

As a volunteer exhibitor for Rêve Academy at the recent Minneapolis STEM Expo, I had the opportunity to meet with hundreds of middle school students who shared their dreams with us. What struck me most was that no matter the dream, each of these students would need to learn how to use certain technologies during the course of their careers. With the way the music industry has been changing, even the aspiring singer will probably need to have some knowledge of how to record a video of her singing to post on YouTube in the hopes of “going viral.”

As innovative applications of technology increase, many industries, from entertainment to healthcare to retail, are experiencing what Harvard Business School professor, Clayton Christensen, terms “disruptive innovation,” or an innovation that creates a new market and eventually overtakes an existing market. One example of a disruptive innovation is the cell phone, which offered portability, but was initially expensive and of lesser sound quality than a traditional phone. However, as cell phones became cheaper and of better quality, they eventually replaced the market for landline phones.

With the pervasiveness of disruptive innovation in multiple industries, I began to wonder how the students I met at the STEM Expo were being prepared with the technological skills to fill these jobs of the future. Will our system of education itself be disrupted as a way to better prepare these students for changing industries?

According to the Minnesota Department of Employment and Economic Development (DEED), Minnesota will need 70,000 new workers with STEM skills between 2009 and 2019. Out of the 20 fastest growing occupations, 18 will be tied to the STEM disciplines. In Minnesota, 60 percent of new jobs by 2015 will require skills held by only 20 percent of the population. Schools throughout the state have made efforts to overcome this skills gap by incorporating new technology, such as iPads, into their curriculum.

“There are real benefits in bringing new technology in the classroom. We need to get out of the old model of teachers at the front of the classroom and kids sitting at their desks. Kids need to get regular interaction and feedback, “said Daniel Sellers, Executive Director of MinnCan, “But I worry that people see technology as a silver bullet. If we just give every kid an iPad, we won’t have an achievement gap anymore. The reality is that it still comes down to good teachers using the tools correctly.”

Former Eden Prairie elementary school teacher and computer science degree major, Matt Hardy, found one way to use the tools correctly. In 2008, he developed Kidblog as a way to manage his paper workflow and engage students in sharing their work within a safe environment.

“Teachers have told me about students taking the initiative to even blog outside of an assignment,” said Hardy, “Some teachers come back to school on a Monday and have 50 blog posts to approve. So their kids found an intrinsic motivation to blog over the weekend.”

However, this use of technology in classrooms is not prevalent across the board. According to Concordia University Chicago Dean, Dr. Thomas Jandris, educators have spent $60 billion on computers in the last five years so that now there is one computer for every four students. However, fifth graders in the U.S. only use in-school computers an average of 24 minutes a week, while eighth graders have 38 minutes a week. Contrast those numbers with the 84 percent of Americans who said that computers are essential for their work in a 1999 NPR/Kaiser/Kennedy School Poll.

So why are computers in schools going unused? Unfortunately, some schools fail to see that technology itself is not the innovation. A new tool that is forced to do an old job will probably not deliver the game-changing results that entice a following of teachers or parents. The real innovation comes in the application of the technology to complete a job that is meaningful for the user. For this to happen in schools, educators must be empowered to use the new tools in entrepreneurial ways. Just as businesses today are using the Internet and smart phones to engage and tailor experiences for their customers, so too can schools use technology to customize curriculum for a diverse set of students with different styles of learning.

For example, Ananth Pai, a third-grade teacher in White Bear Lake, uses a variety of computer and video games to engage and excite each of his students, no matter their level or pace of learning. He also leverages technology to minimize the amount of time wasted in transitioning from one subject to another so that he can dedicate more of his time analyzing the learning needs of each student.

“It doesn’t matter the device or the method you give teachers. Unless the capability in the room is based on addressing the great diversity of learning need and the teacher’s analytical abilities, it’s not innovation,” Pai said, “We’re still doing the same things the same way that things have been done by our grandparents. We don’t analyze how the kids are learning. Teachers spend very little time on analysis. We need to spend more time on analysis.”

Although Pai’s innovations have produced results (he managed to lead his students through a year of learning in half the time), he has not always been able to garner support directly from the school system. Pai must use his own money, grants, and the generosity of other teachers and parents to keep his student-centered classroom afloat.

According to Cristine Leavitt, Process Improvement Administrator for Minneapolis Public Schools, a more structural transformation in our education system to support this kind of innovation will require a tipping of the equation.

Meanwhile, charter schools in Minnesota are starting to serve as testing grounds for potential disruptive innovation. This week at the second EdTalk in the Twin Cities, Kerry Muse, Chief Learning Officer and Head of School at Venture Academy, a Minneapolis public charter school opening in August, spoke about using technology to personalize learning and motivate students to take ownership of their education.

Disruptive innovations in the area of higher education may also influence the K-12 system of the future. Last week, the University of Minnesota announced that they are joining MIT and Stanford in offering Massive Open Online Courses (MOOCs) for the first time this spring. MOOCs are a disruptive innovation that enable people to learn at their own pace, in their own space, and at a very low cost point.

This new model opens up educational opportunities for people who previously could not afford schooling, or were too busy for classes in the traditional system. MOOCs may also pave the way for high schools in rural Minnesota to offer a wider variety of classes for their students, from Chinese to Global Health, all without having to pay for extra staff or facilities.

Outside of the public education system, out-of-school programs and organizations like Rêve Academy are also working to empower young people with the technical skills to shape future innovations by teaching students how to code, build websites, and communicate in a digital world.

Seventh grader, Trolane Moore, said, “Rêve Academy allowed me to think outside the box and realize what I wanted to do.”

Using technology to customize learning experiences for students and to help young people think outside the box about their individual potential is one way that the traditional system of education we know today could be disrupted. Although there will certainly be growing pains as our system of education changes, in the end, these innovations will better prepare the aspiring singer, doctor, and businesswoman I met at the STEM Expo to be successful in their future career paths.