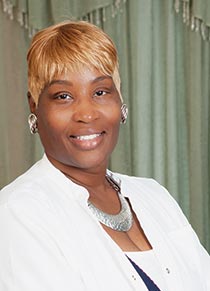 "I encourage [women] to keep fighting no matter how many times you've been knocked down; stand strong even when you come up against any barriers; face life struggles boldly and with ... confidence. ... Remember, in life, it's about the choices we make. More importantly, learn to love and respect yourself so that you can set the standard for how you want others to treat you." - Pam White, words from the founder/president on the HER website

There’s a love fest going on at Health Empowerment Resource (HER) Center, a small health clinic in north Minneapolis. And dispensing that love, along with health care, is clinic owner and nurse practitioner Pam White.

“We basically just love people,” White says. “I know people see love in me. We are faith-based, treating the mind, body and spirit. We must be balanced in all those areas.”

Although the clinic will treat anyone who comes to its door at 3306 Lyndale Ave. N., “we specialize in the care of black folks,” White says. “We pride ourselves on being able to empower and teach the black community on how to take care of and improve their health.”

The HER clinic has been White’s dream – literally. “In October 2008, I had a vision,” she says. “I woke up out of a sound sleep and wrote that vision and the mission,” which at the time centered on treating black women and working to better educate them about HIV-AIDS. AIDS is the leading cause of death for black women between ages 25 and 34.

“In my opinion the HIV rates are higher in African-American women due to lack of awareness of how HIV is transmitted and lack of self-empowerment to advocate for condom use,” she says.

By 2009, she had established her business name, and in 2010, the HER clinic opened its doors, becoming what White says is the only nurse-practitioner-owned medical clinic in the state.

That isn’t her only first. In the medical field for nearly 30 years, White was the first African-American nursing director in Minnesota. Over the years as she worked in the profession, she was appalled by the disparities in health care for black people, a lot of it attributable to an inability to afford medications, poor education on what it takes to be and stay healthy, and a lack of understanding on the part of providers as to the plight of blacks in the inner city.

“To be healthy in body, you must be healthy in mind,” White says. In fact, as she sees it, the biggest health problem among blacks today is untreated mental health issues.

There’s also the issue of post-traumatic stress disorder (PTSD). Health practitioners unfamiliar with life in the inner city often miss it. “It’s minimized,” White says, “and people don’t get the right treatment” because practitioners don’t recognize it in those who have never served in the military or had any other obvious reason to suffer PTSD.

White recognizes it. “I had a couple of young ladies who saw friends shot dead right in front of them,” she says.

White is hoping to expand HER’s staff soon to include the use of community health workers to do mental health education. “It’s all in God’s hands,” she says. HER treats anyone, regardless of ability to pay.

In addition to being the only medical practitioner at HER, White also does a fair amount of counseling of teenagers and parents of teenagers. Parents have to “say what you mean and mean what you say,” White says. It’s tough love in action, with the emphasis on love.

White has a soft spot for pregnant teens. She understands because she was once in their shoes. Pregnant at 16, White was so despondent over disappointing her parents that she ran away. “My dad came and got me,” she says. She went home to a difficult situation in the community, but was held up by her parents’ unwavering love and support.

“There were mothers who wouldn’t let me [hang out] with their daughters anymore. I remember people telling me I was not going to amount to anything. I tell these young ladies, ‘This is a mistake, I understand. But you can do and be anything you want,'” she says.

White is planning to move her clinic to bigger quarters within the next year, but HER Center will still be nearby.

“I won’t leave north Minneapolis,” she says. “The people here are really hungry for good care. I want to be a legacy in the community, to give people the resources to live a long and healthy life.”